Seven Wonders of the World

Currently there is a global competition to name the new 7 wonders of the world. The UNESCO (The United Nations Educational, Scientific and Cultural Organisation) currently has 830 World Heritage Sites, and only 21 finalists are being selected.

These 7 were deemed wonders in ancient times by observers of the Mediterranean and Middle East. 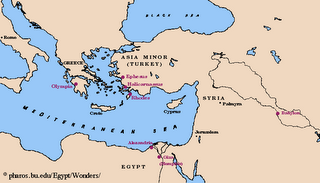 Map of 7 wonders of the world

Do visit this website for more about the 7 ancient wonders of the world: http://ce.eng.usf.edu/pharos/wonders/index.html

Below are the 21 finalists for the new 7 wonders. You can vote your choice at this website:
http://www.new7wonders.com until 6 July 2007. The 7 winners will be announced on 7 July 2007. Do leave your comments below on which are your 7 wonders.