Hubby parked his car at Resort World Sentosa carpark and from there we walked to Adventure Cove. Adventure Cove is situated behind Sea Aquarium hence we have to detour one big round before reaching the entrance. 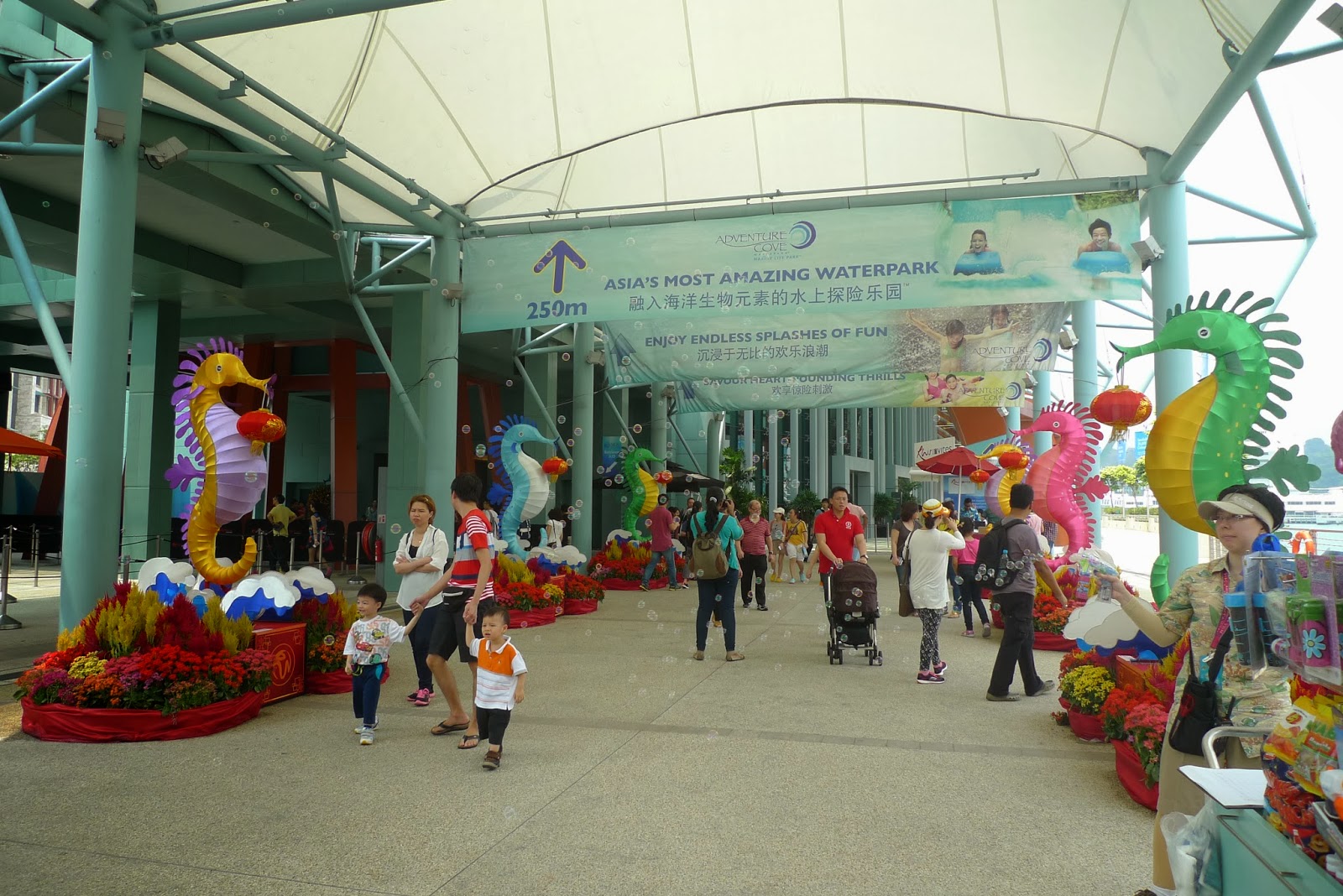 We saw a lady selling Adventure Cove at a distance from the entrance but I'm not sure if the ticket is cheaper. Similar to USS ticket, I have purchased Adventure Cove ticket at a discounted price at S$23 from my sis previous company. 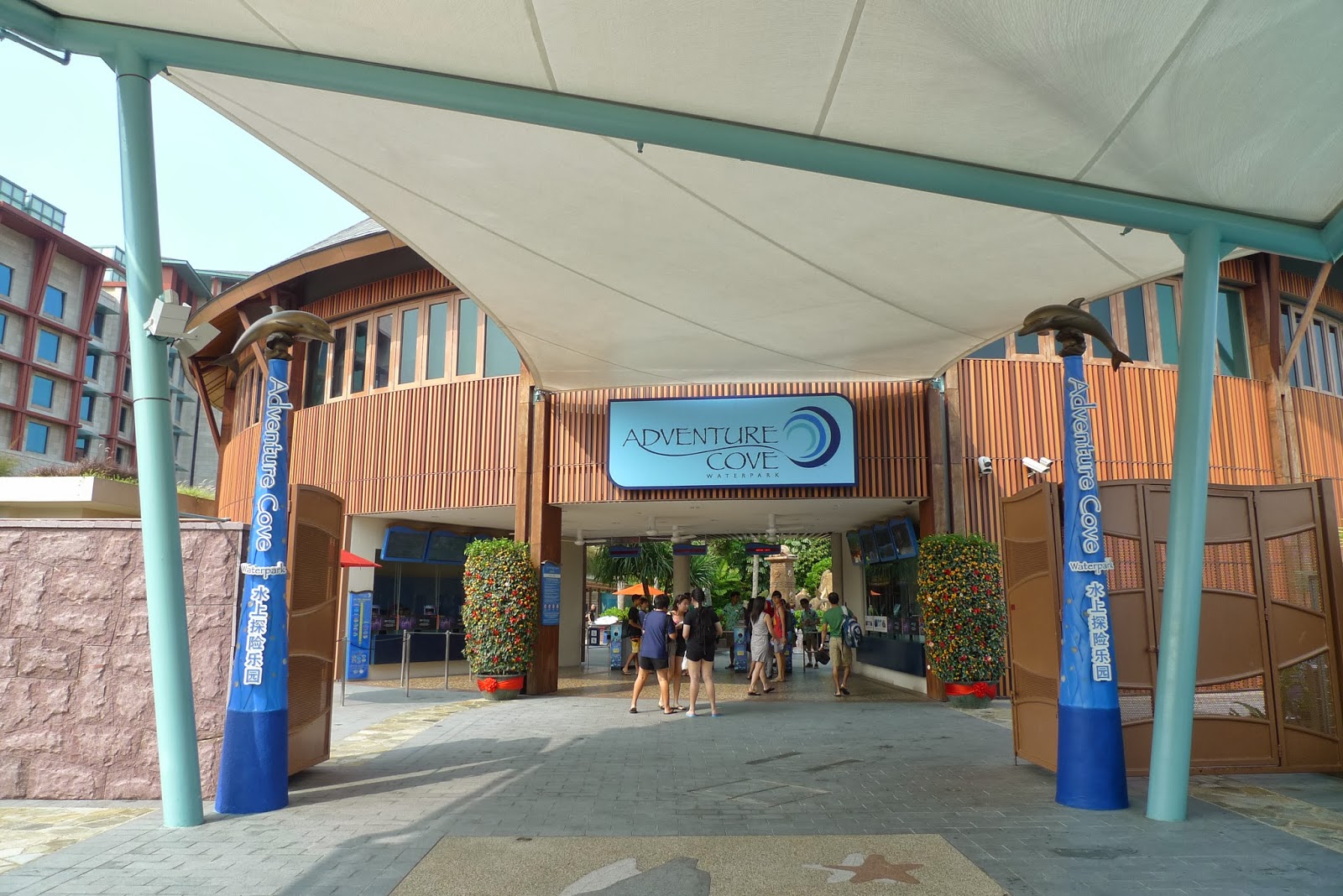 We reached at 10am which is the opening hours hence there ain't many people in the park. Visitors have commented that the locker and toilets near the entrance are usually crowded so we walk further in to the rides at the middle of the park and used the lockers over here. The locker cost $10 for the whole day which is very expensive. We actually paid $5 for the locker which I shall divulge later on.

It is advisable to wear a slipper when walking around as the hard ground is not comfortable for the feet. There are storage rack at every ride to place your slippers and spectacles. 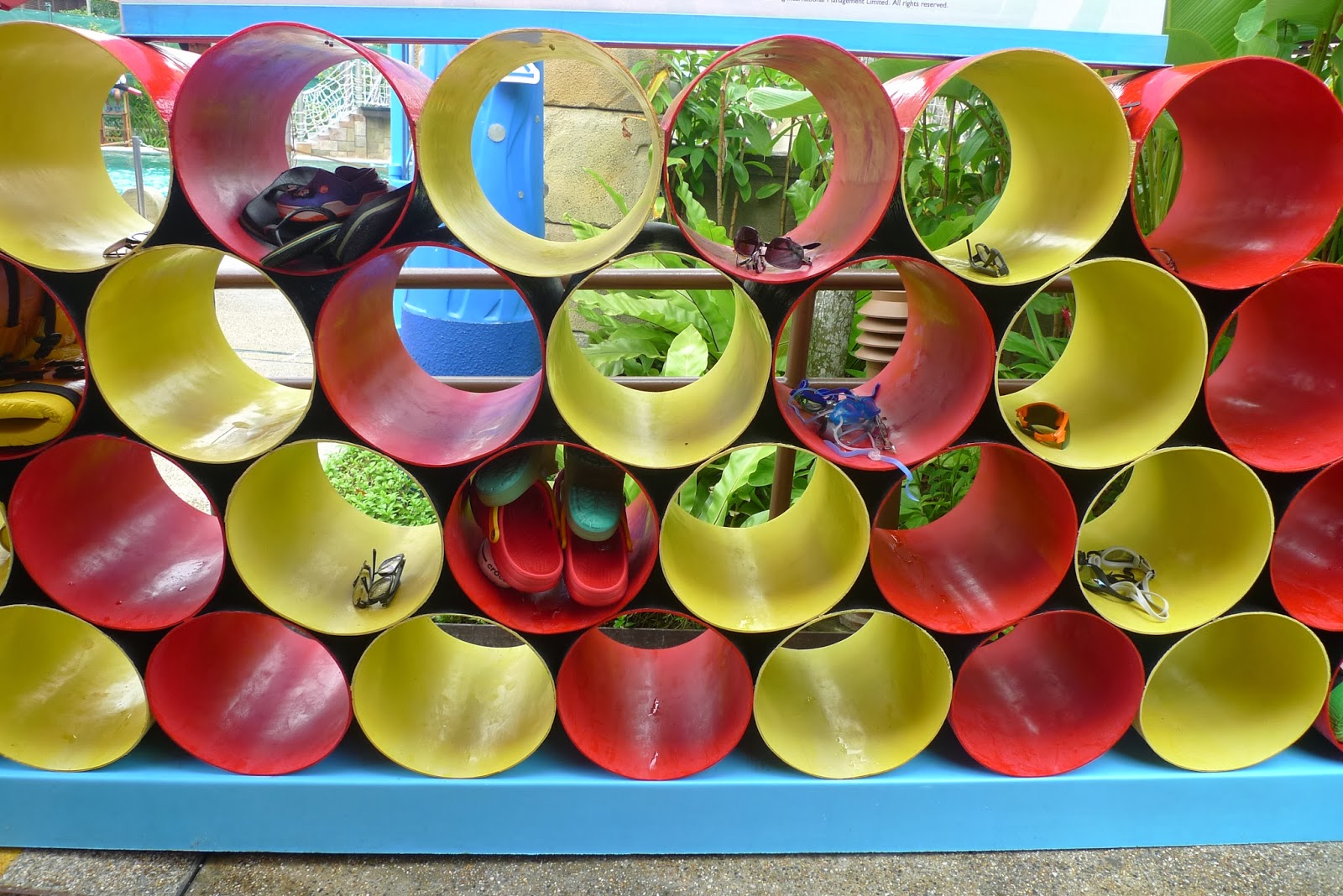 We started the ride at Tidal Twister and Pipeline Plunge. I have mistaken the Tider Twister as the Riptide rocket which is the most popular ride. We then continue to Riptide Rocket. This is the most exciting ride in Adventure Cove. We feel like sitting in a roller coster but instead of using roller, it's using water. We tried this ride twice and the waiting queue also increase from 15min to 20min. 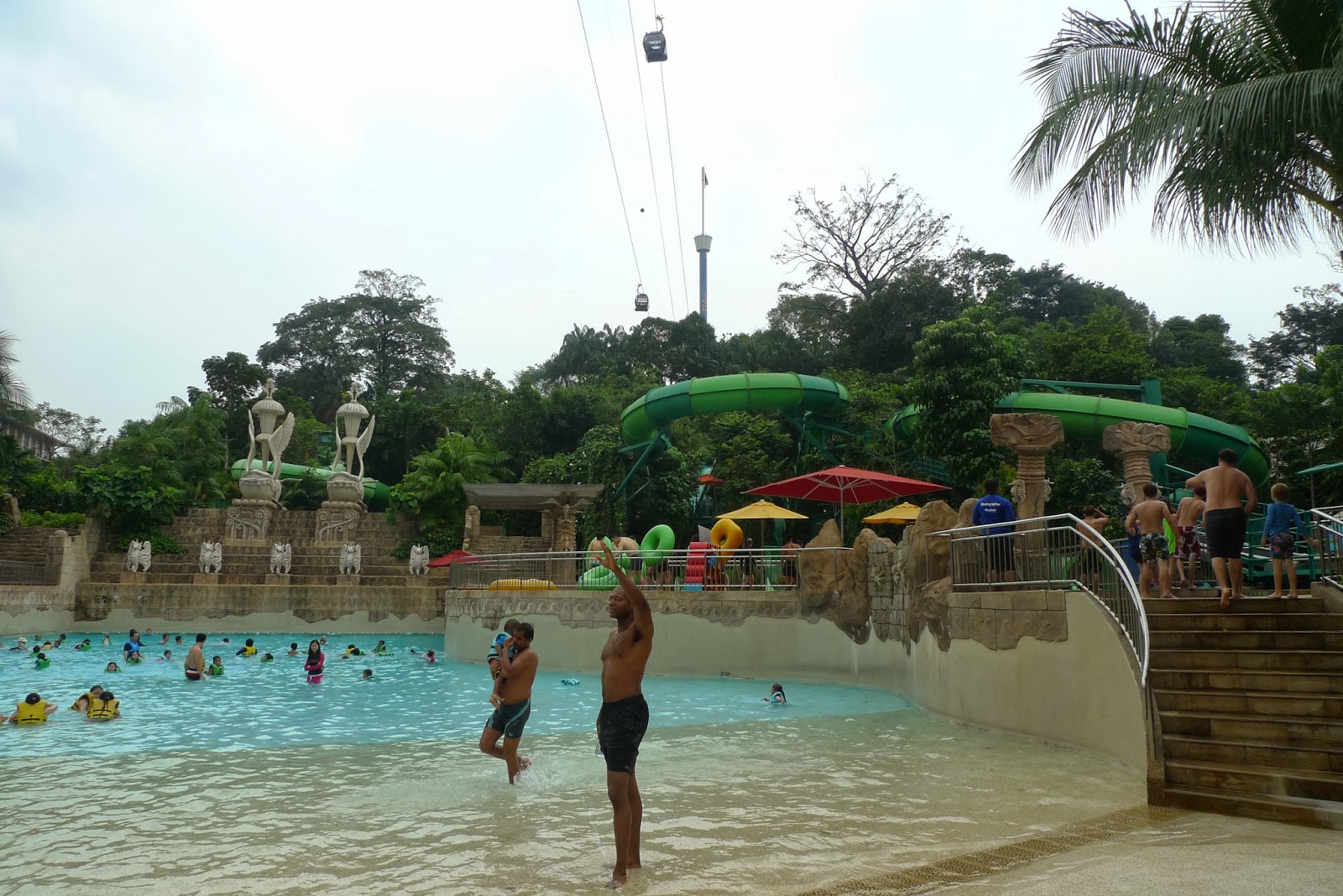 Next, we took dueling racer where each of us will lay on a mat and ski down the slide. This is also pretty interesting and we took it twice since the waiting time is less than 5min. 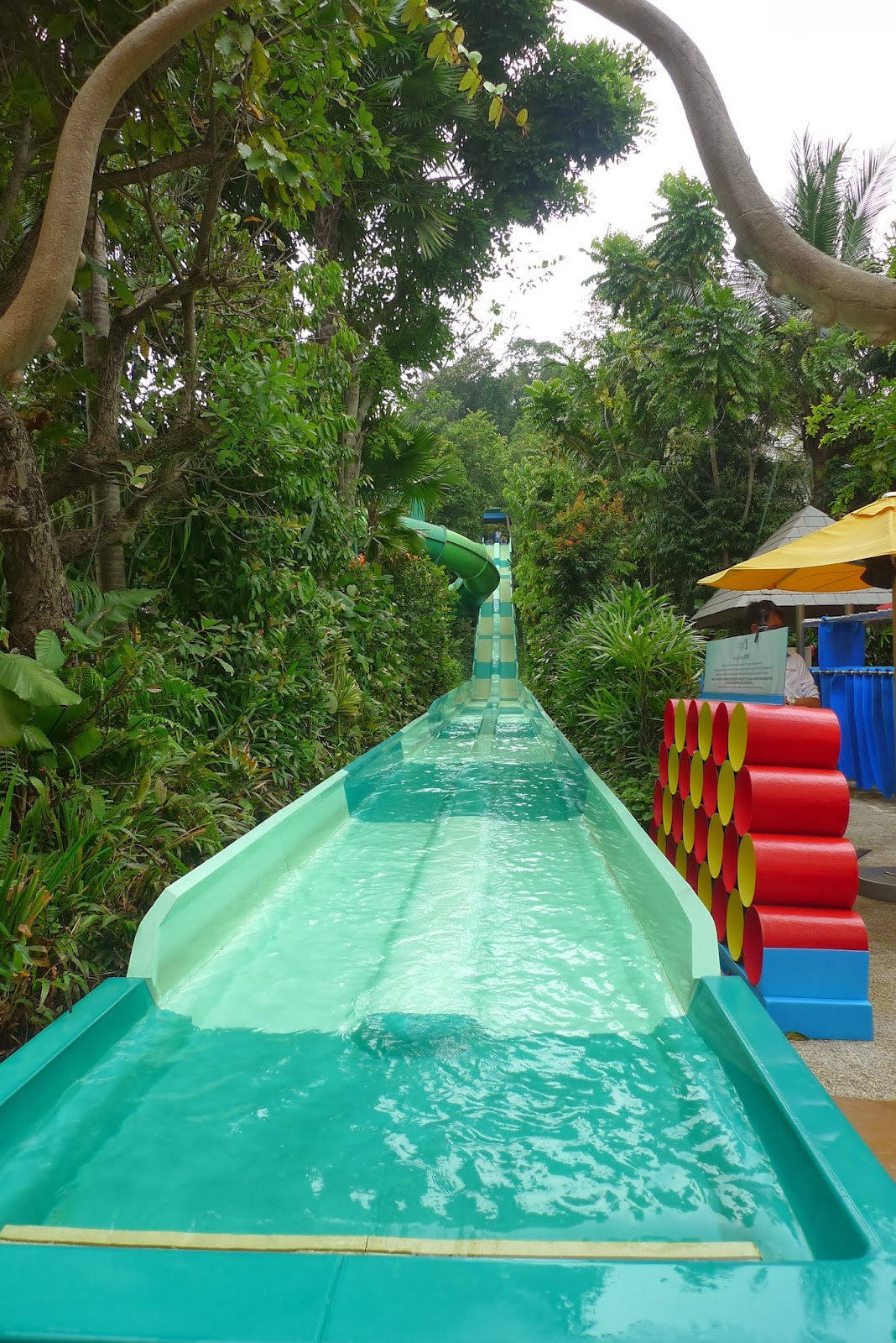 Then we had spiral washout and whirlpool washout which are just side by side. For these two rides, there is only dual float. After that we snorkelled at rainbow reef. The staff will ask if you can swim and non swimmer are not allowed to snorkel. Life jacket and goggles are provided. From above, the snorkeling area is not big but after we snorkelled, we realize that the loop is quite big.

Which size for you? 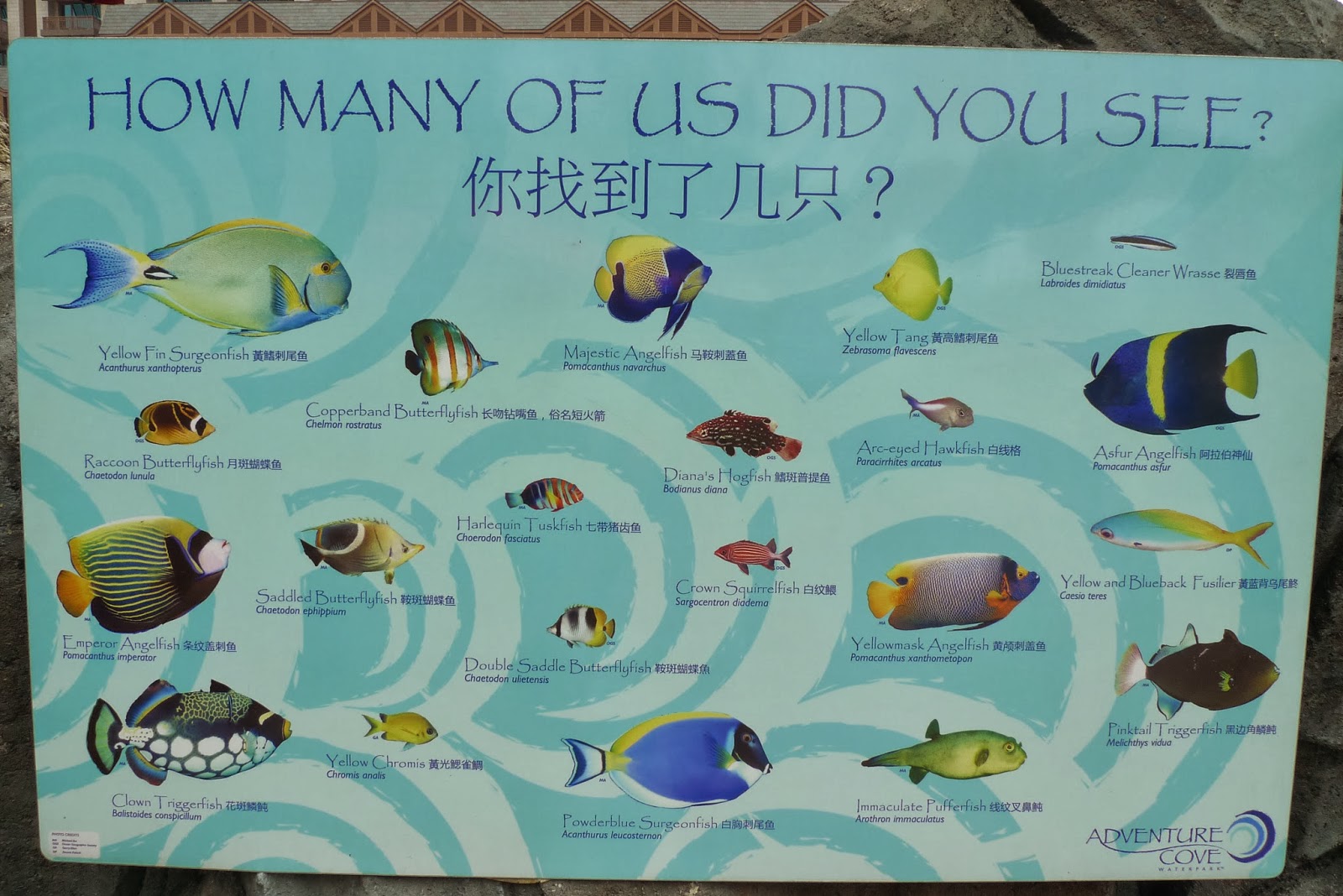 How many variety can you spot?

Opposite the rainbow reef is the Splashworks. There are few obstacles such the platform cliff jump, crossing the balance beam, crossing the tight rope, crossing the cargo net and climbing up the rope to ring the bell. Initially I choose the higher platform to jump but I got so scared the moment I'm at the cliff so in the end, I jumped from the lower cliff. We tried all except the last one and crossing the ropes are not easy tasks. 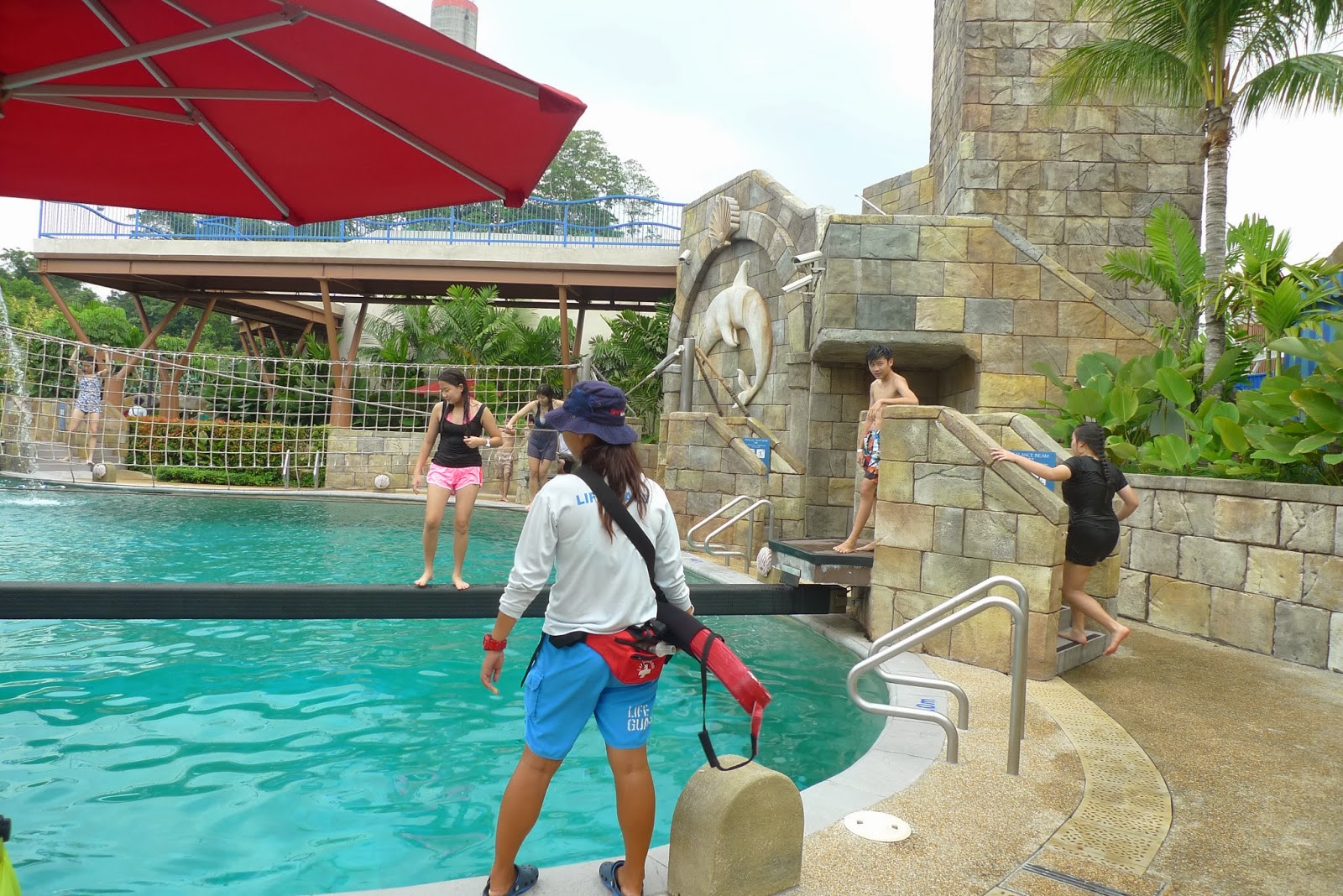 We floated on the tube along the river around Adventure Cove as we are tired after playing the obstacles. The river is 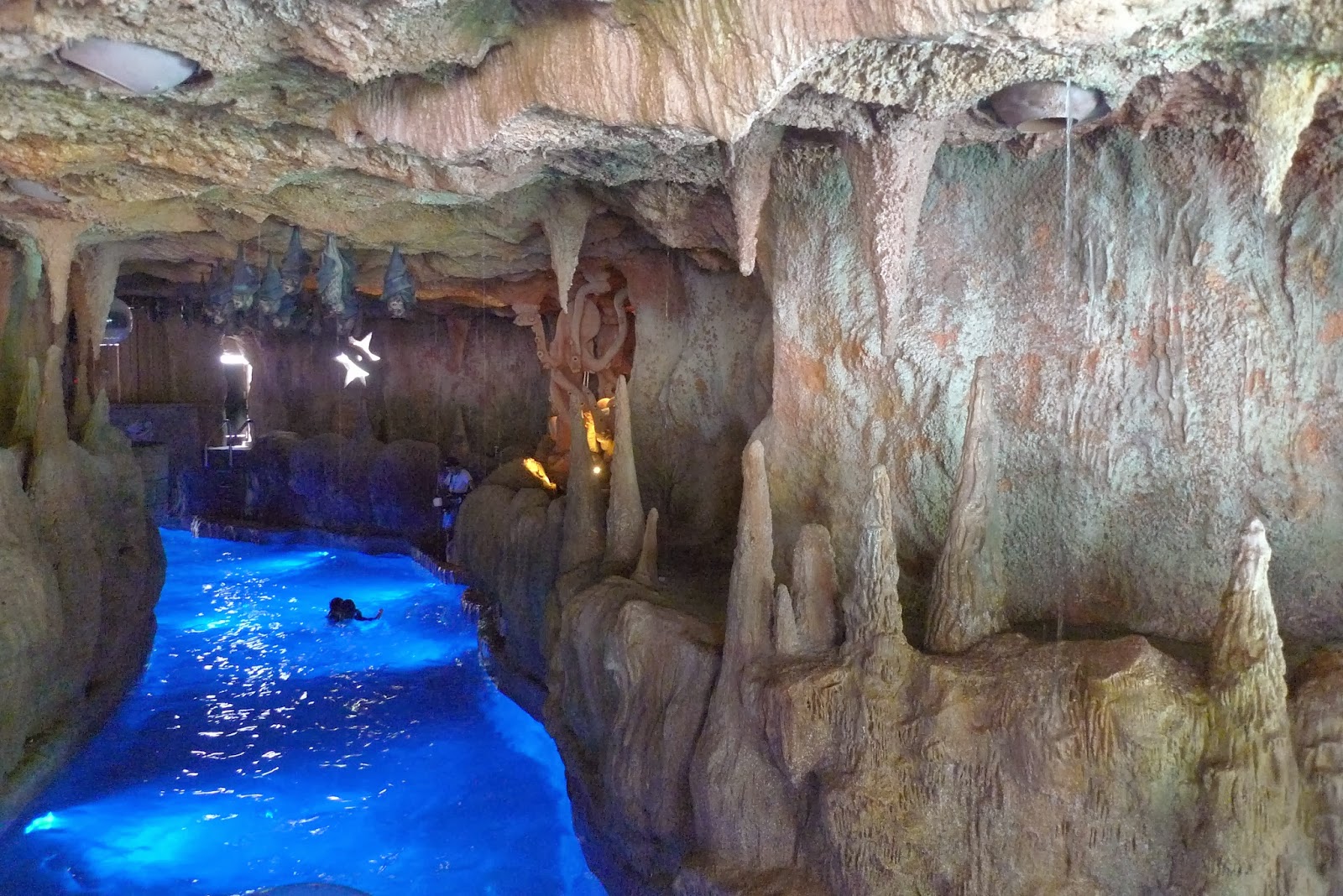 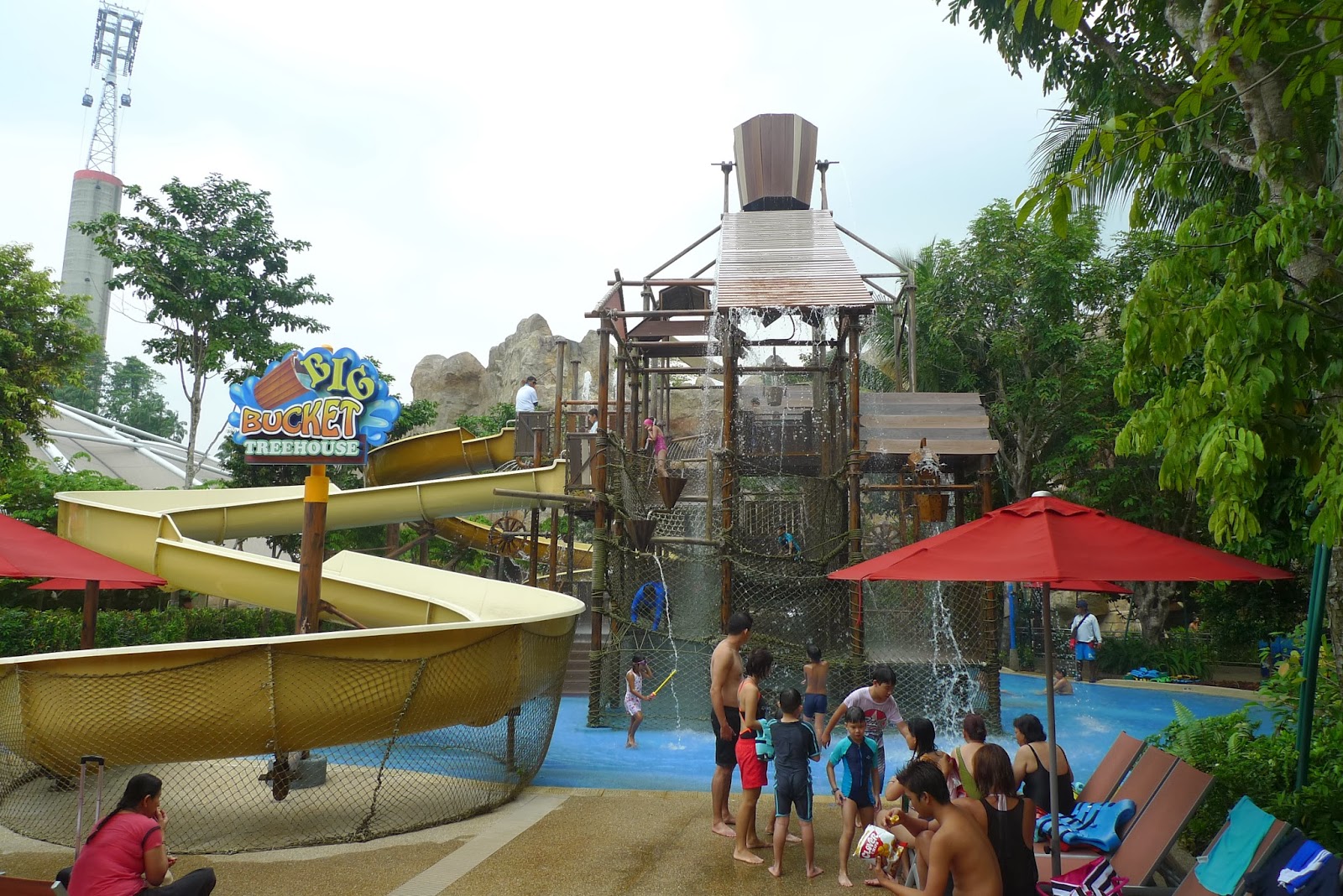 We decided to have lunch elsewhere as there is only one restaurant inside Adventure Cove and price is not cheap. We sold our locker to another visitor for $5 and it's win-win situation for both of us. 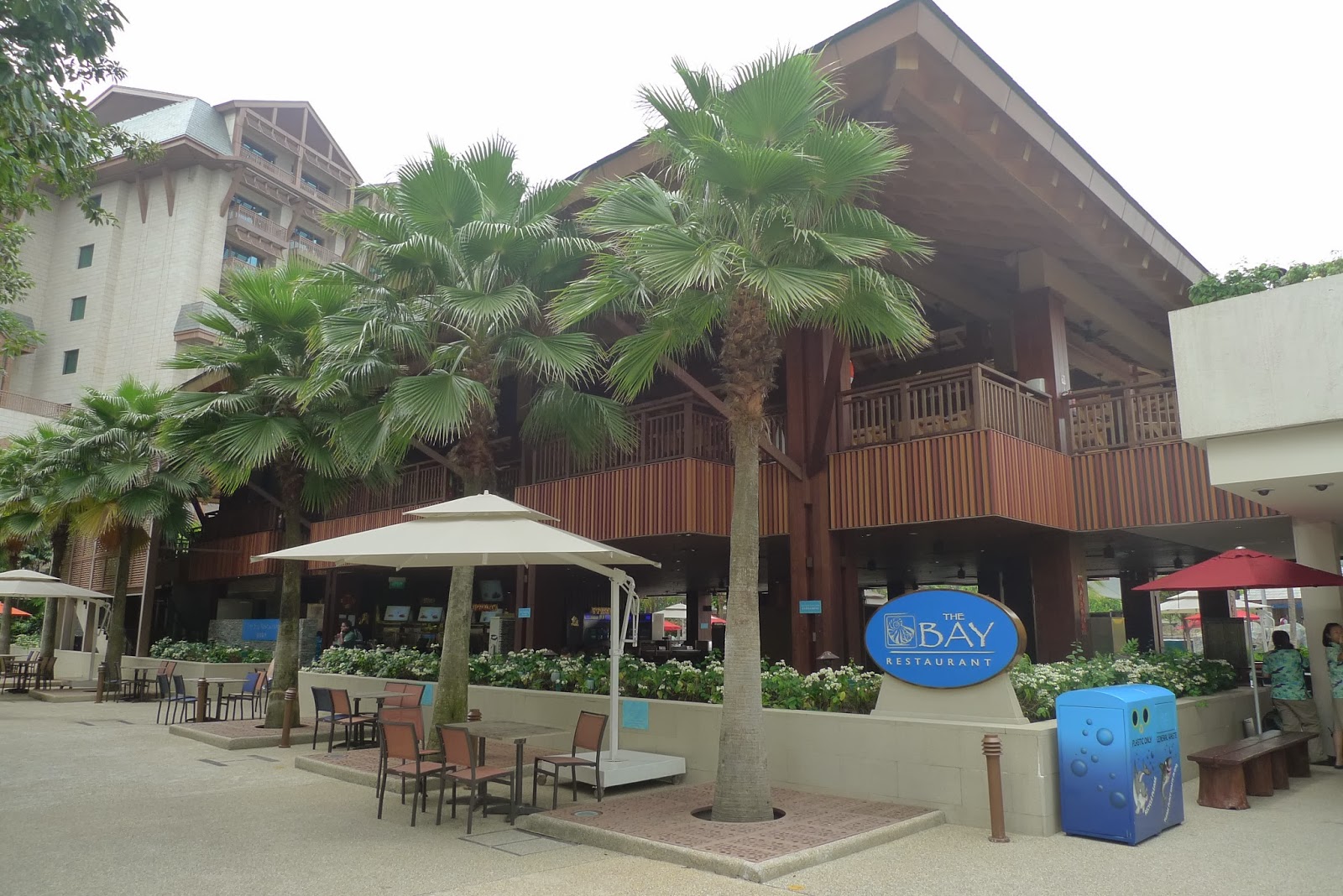 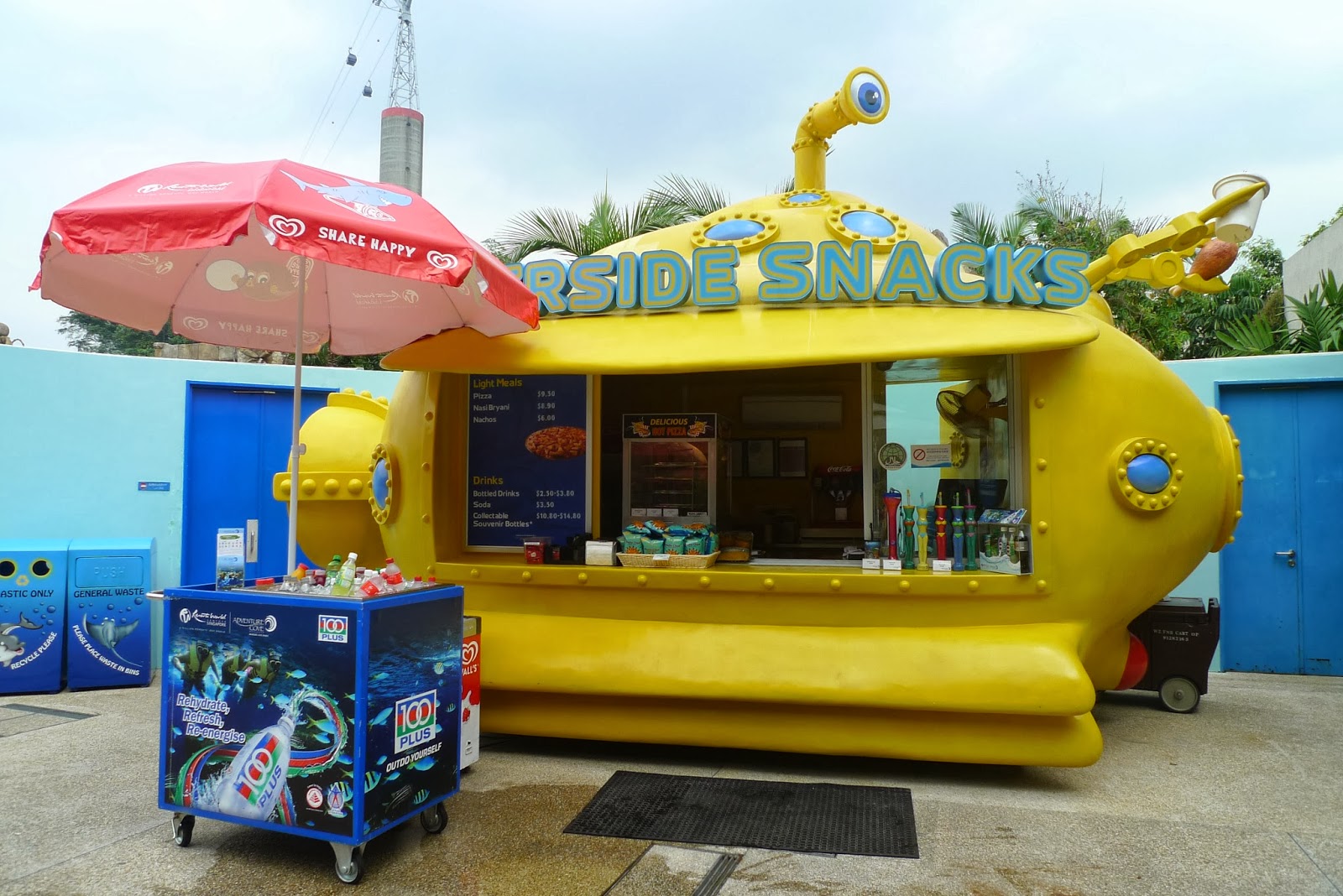 Sand bag chairs on the beach

Look at the queue for riptide rocket

The exit is inside the souvenir shop and photos taken by the in house photographer are available for purchase here. 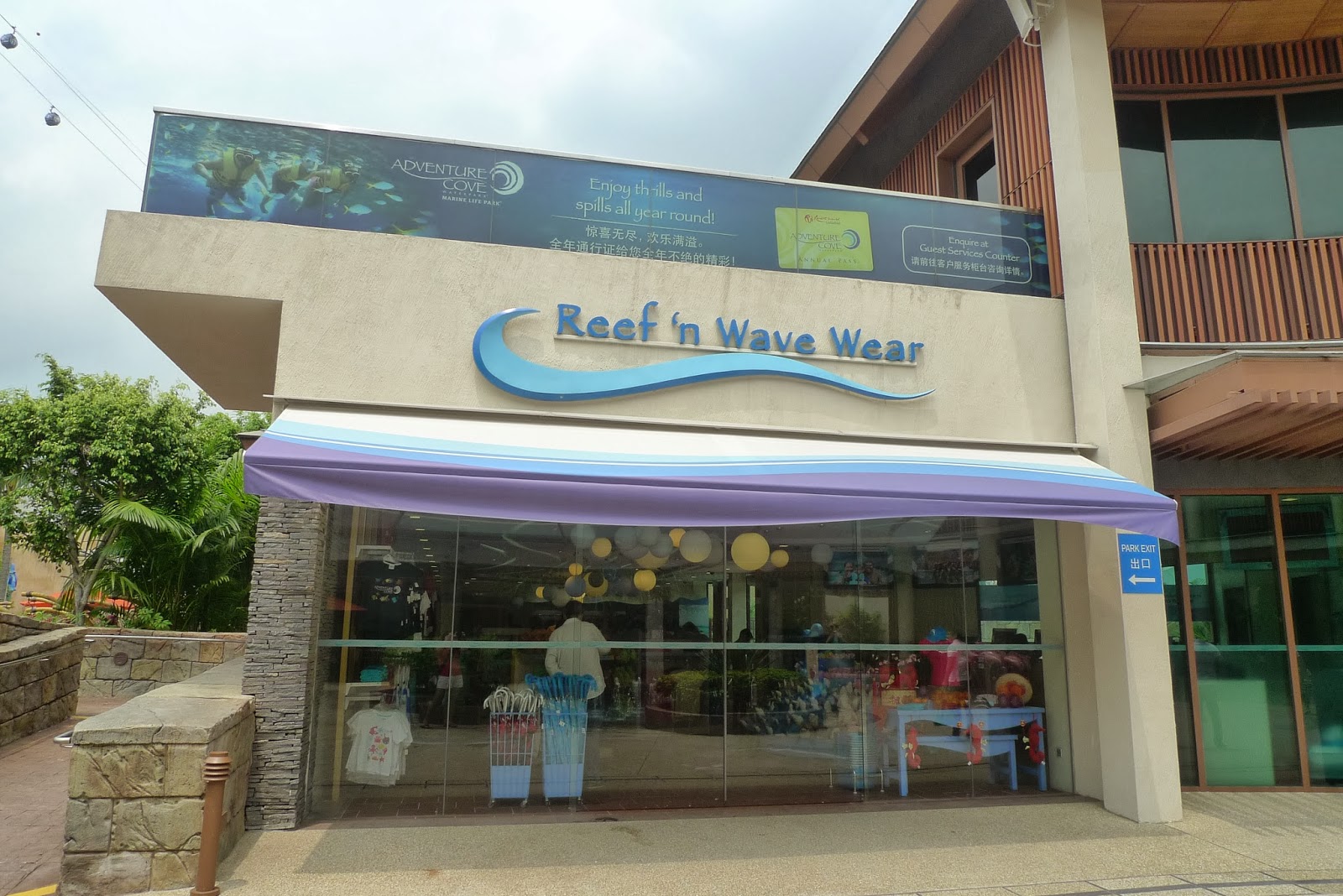 In my opinion, the rides in Adventure Cove can be completed within half a day if you reached there at 10am. The waiting queue is short but gets longer as the day goes by. The most popular ride is Riptide Rocket so start with this ride before continuing with other rides.
Posted by Jerlin Tan at 11:59 am