Legend Hotel provides complimentary hotel shuttle to Formosa MRT and we have booked with the receptionist the night before. 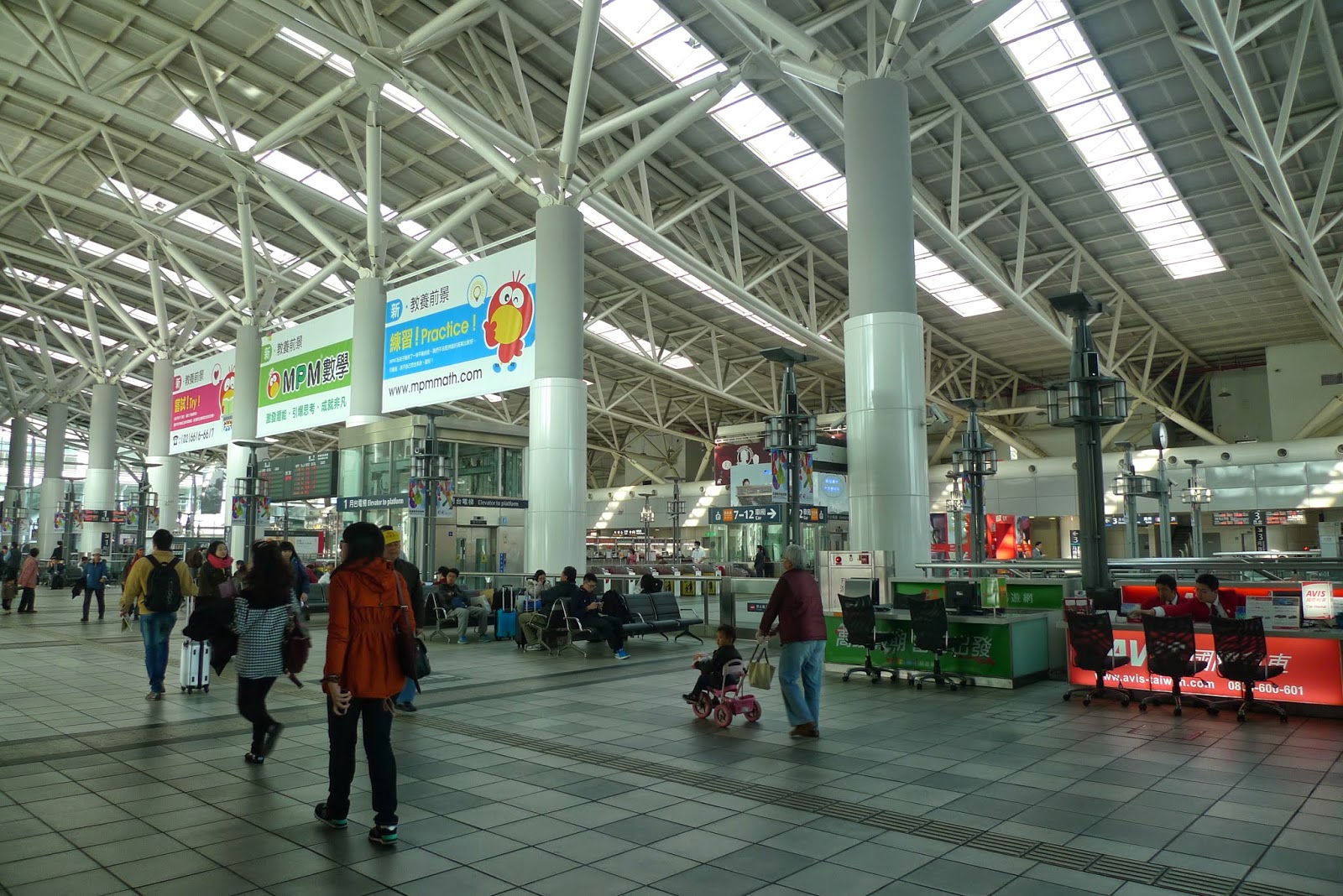 The HSR from Zuoying to Taichung HSR tooks 40min. We proceed to the bus counters which are located at the basement. We bought a one way ticket as we will be returning from Cingjing instead. 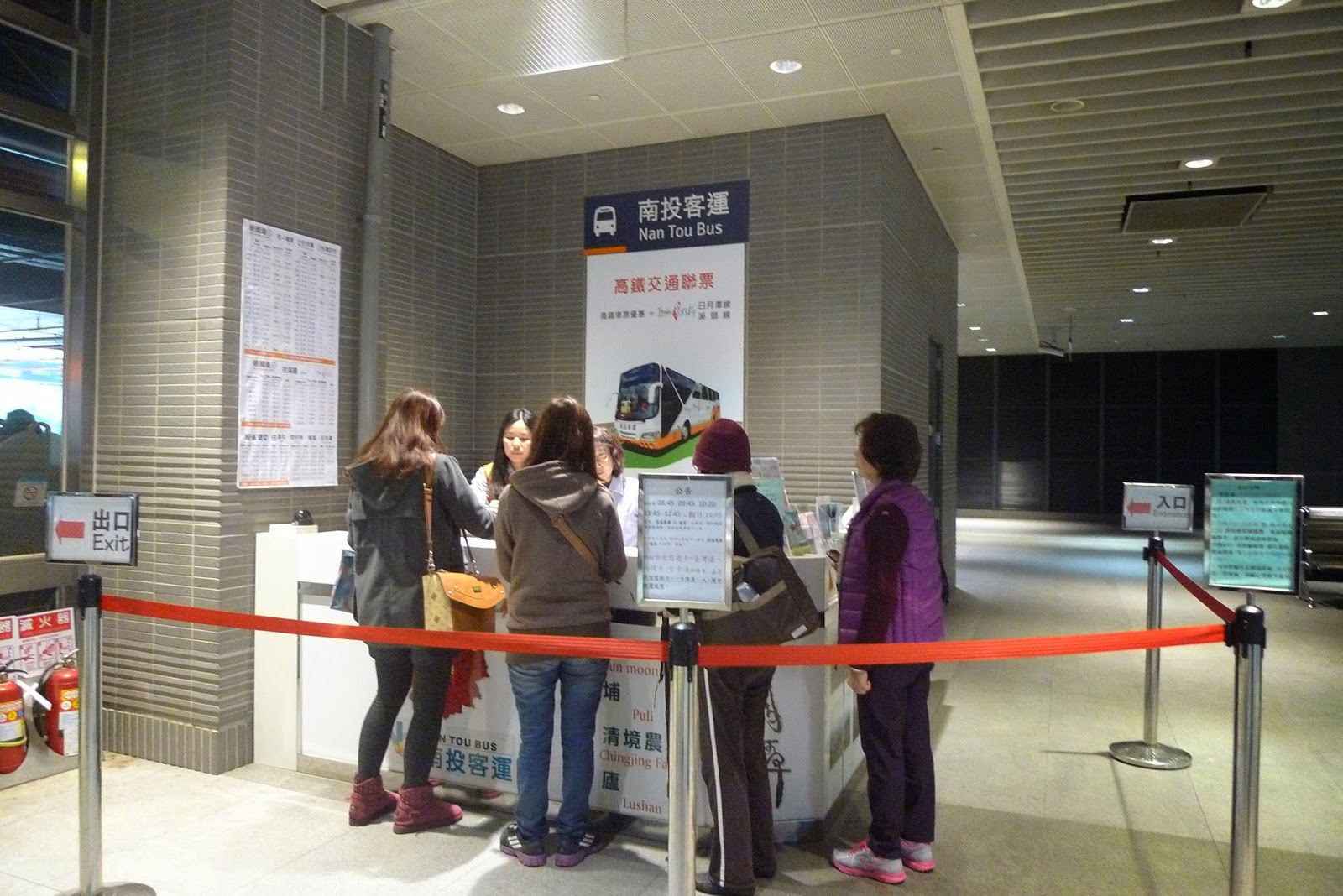 There are several queues since there are buses to various destinations such as Sun Moon Lake, Puli, Cingjing etc. 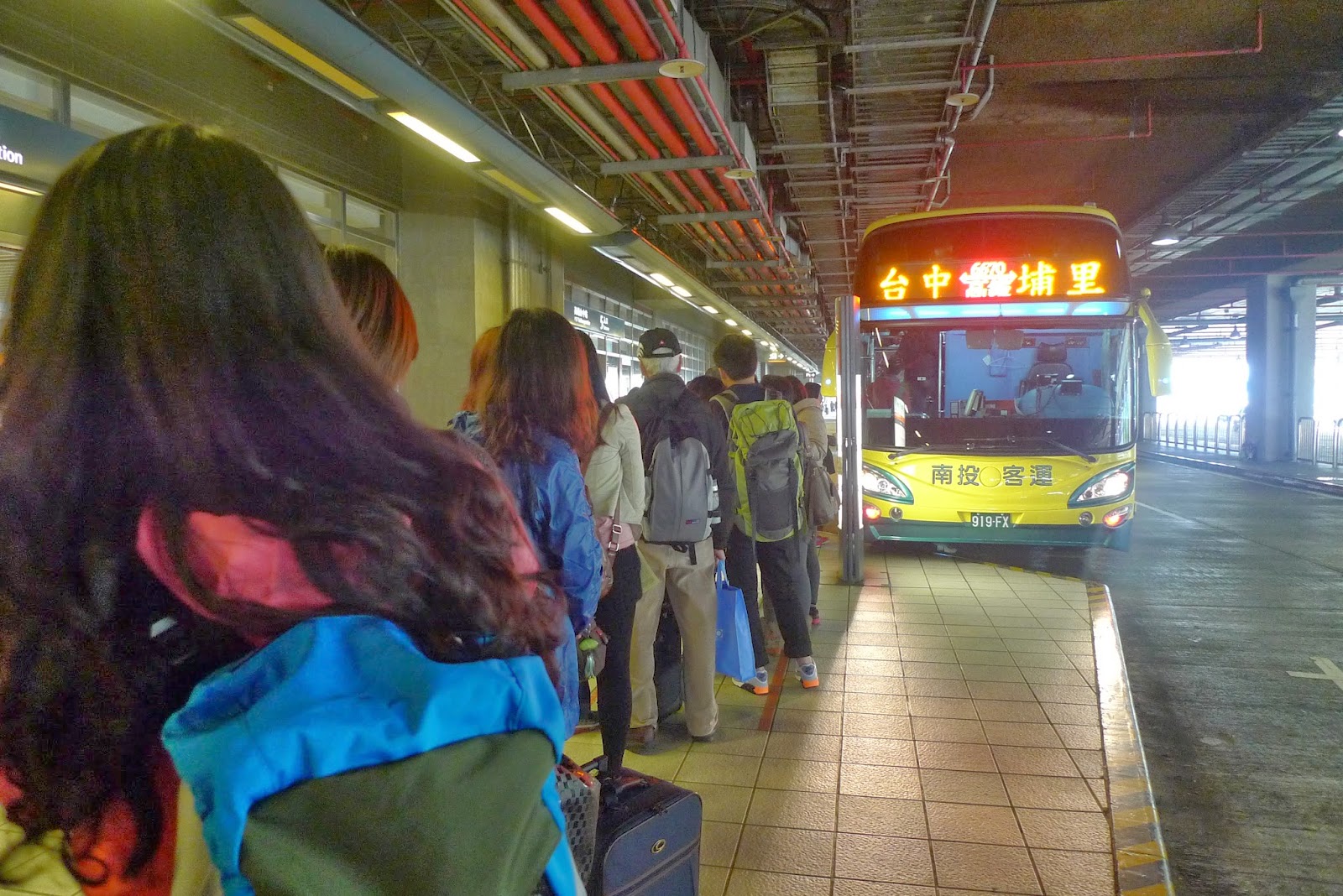 The bus stopped at  Itashao 伊达邵 before terminating at Shueishe visitor centre 水社旅客服務中心. I enquired at the visitor centre on how to purchase the bus ticket to Puli tomorrow as we will be taking the 8.30am bus but the service centre will only open at 9am. The staff from the visitor centre told me that I can purchase it directly from the bus driver when I board the bus. I make a mental note to keep loose notes for tomorrow bus ride. 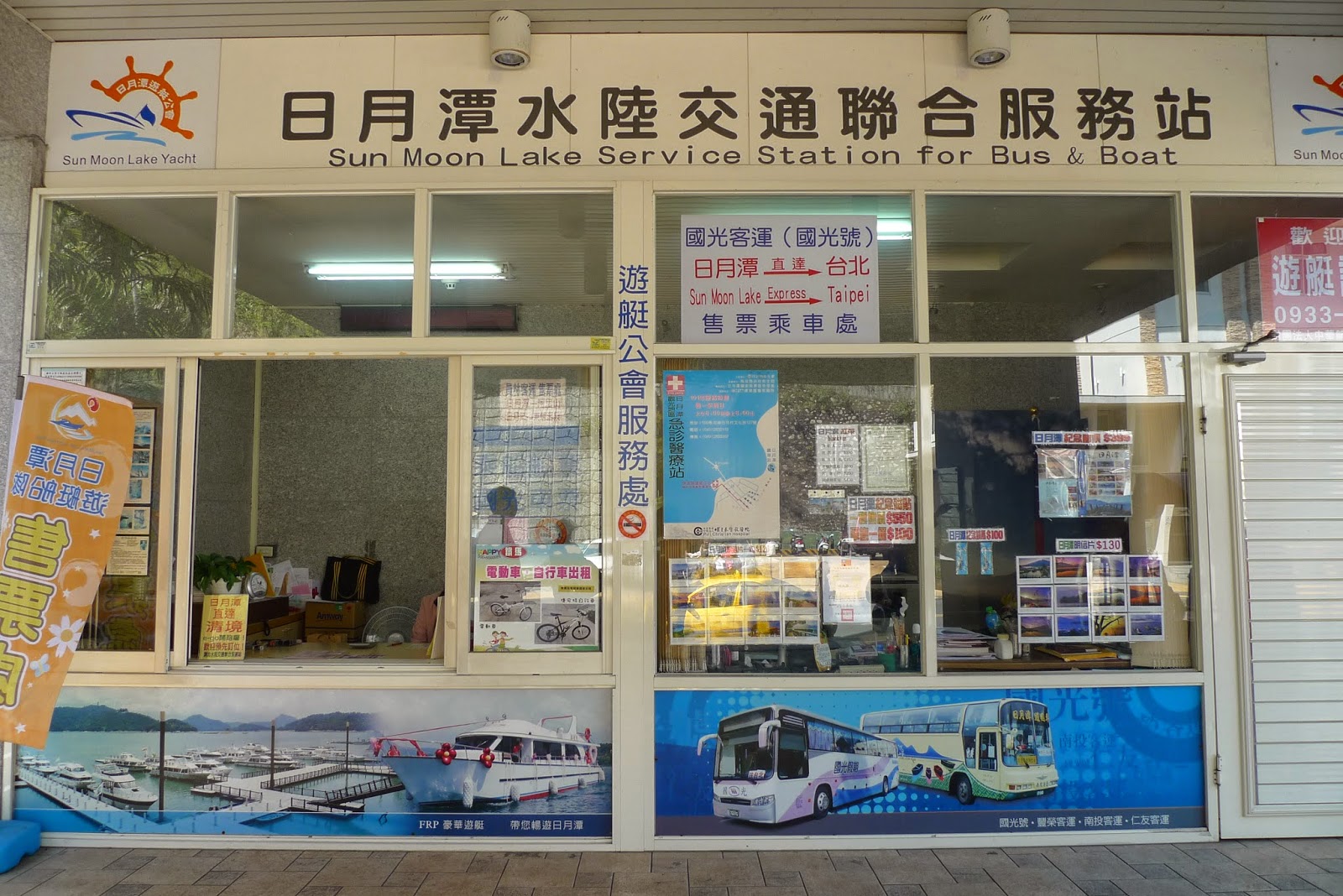 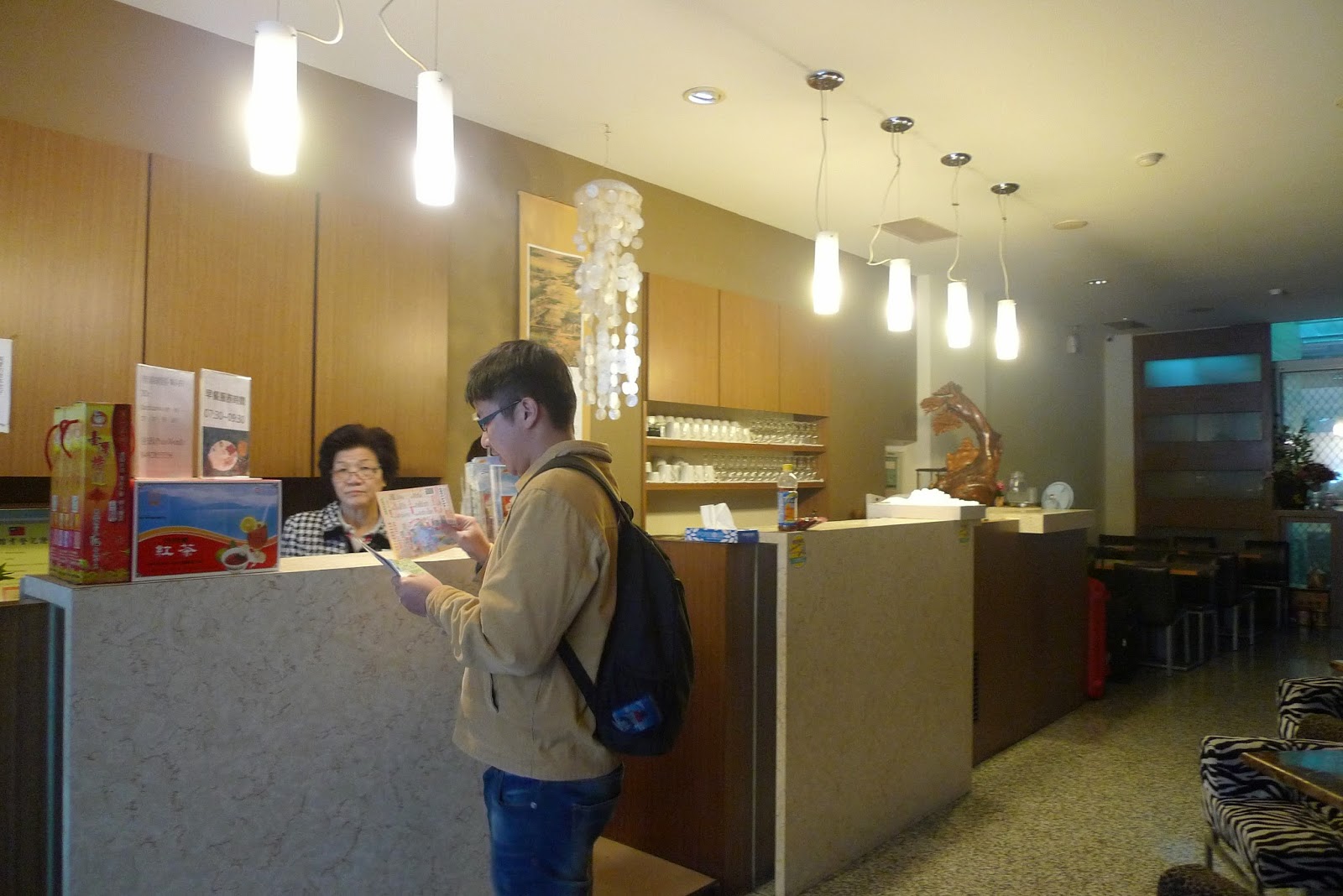 The lane leading up to Shueishe pier is full of hotels and shops selling snacks, drinks and souvenirs. 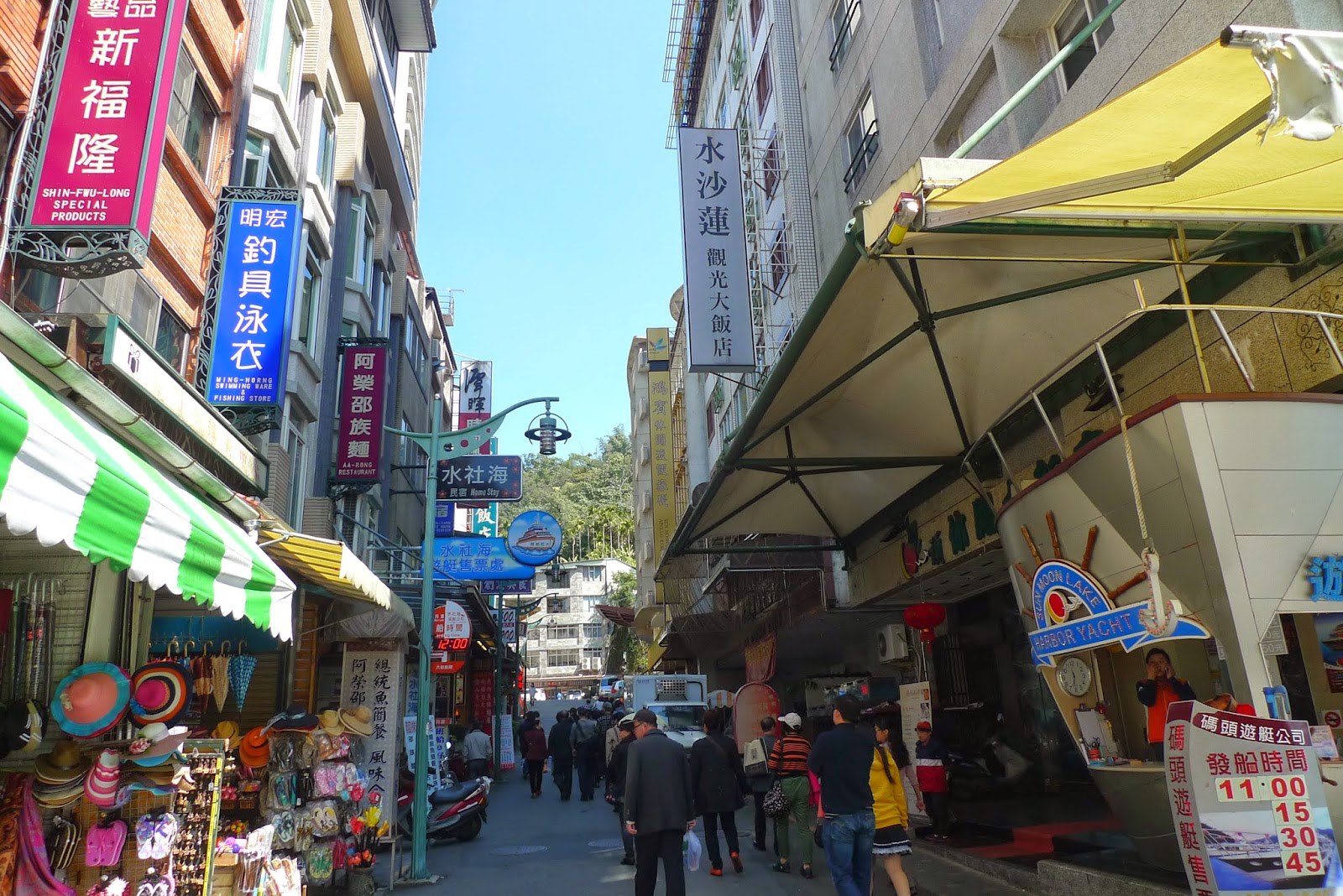 Shops along the stretch leading to Shueishe pier

Hubby wanted to eat the deep fried chicken so we bought one from this shop and we also bought the lemon green tea. I highly recommend their lemon green tea. We tried the red tea later but preferred the green tea.

Recommend the Lemon Green Tea from this shop

The ferry departure timing roughly once every hour so we have to plan the time to spend at each place. The ferry depart from Shueishe pier then followed by Itashao and Syuangguang and back to Shueishe. 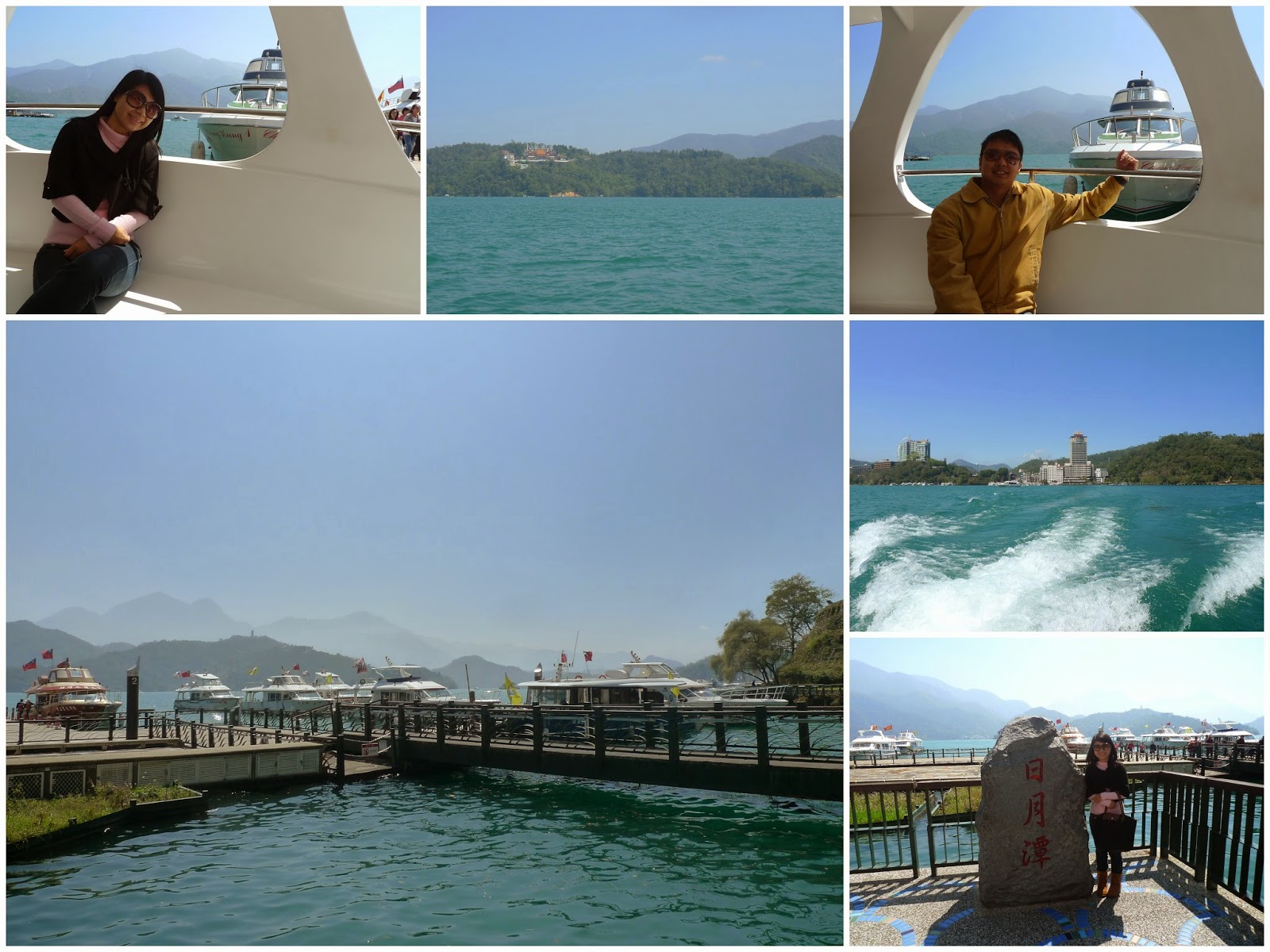 Itashao is an aboriginal village populated by the Thao 邵族. Thao tribal people are the smallest of the Taiwanese aborigine group in terms of population 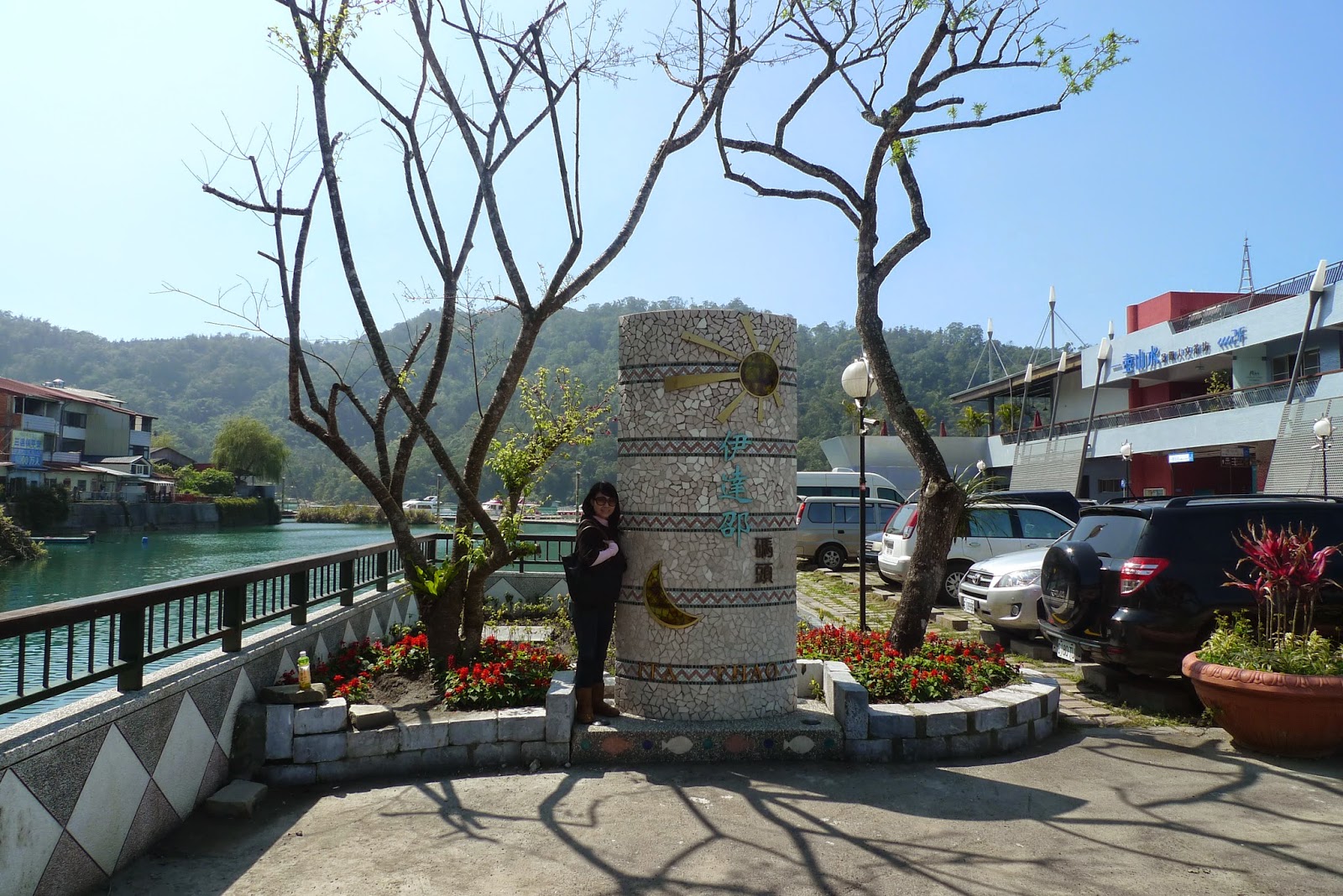 There are 2 food street lanes selling food and souvenirs at the pier. We had grilled boar pork, chicken wing stuffed with rice and fried cabbage for lunch. 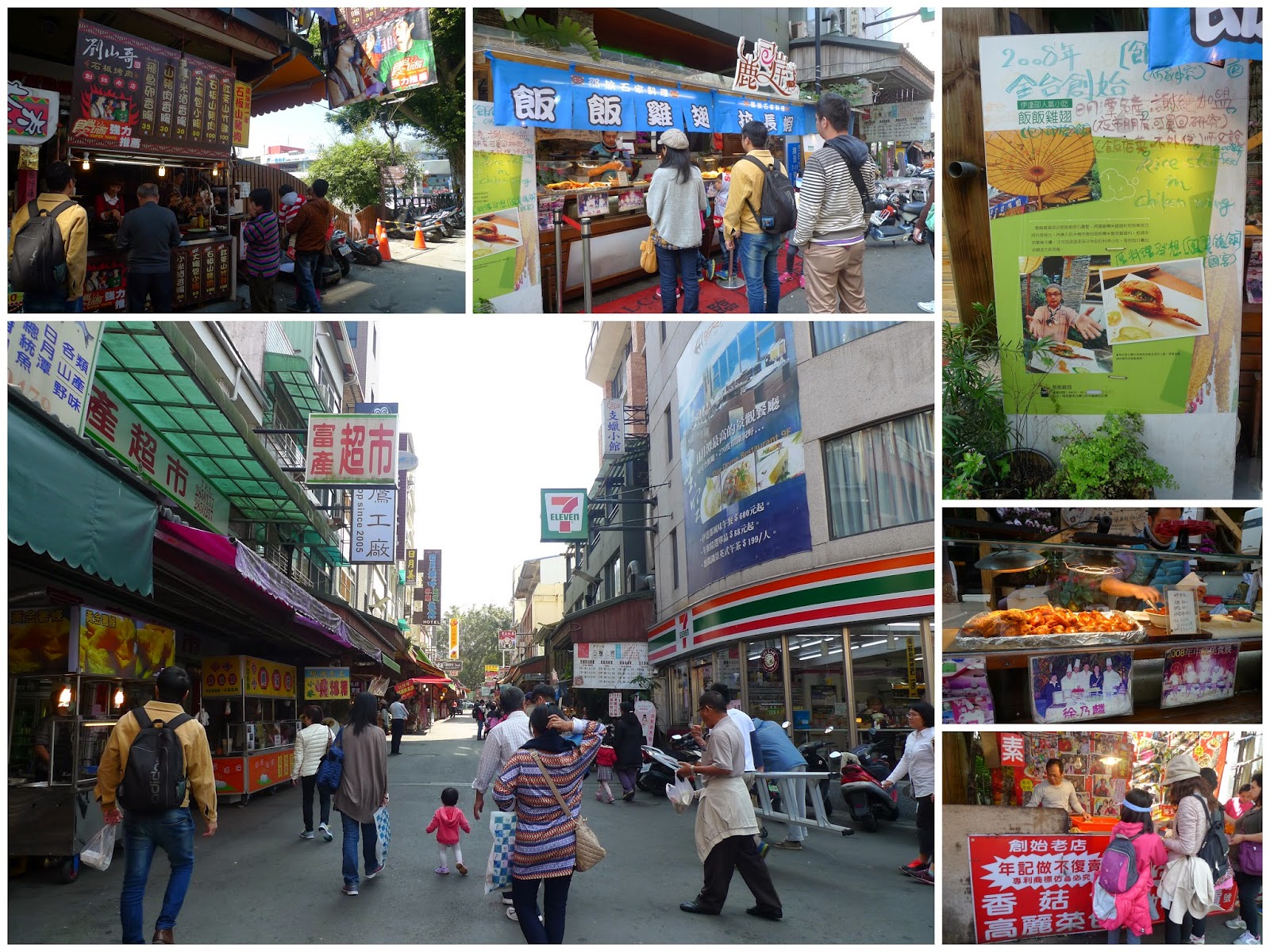 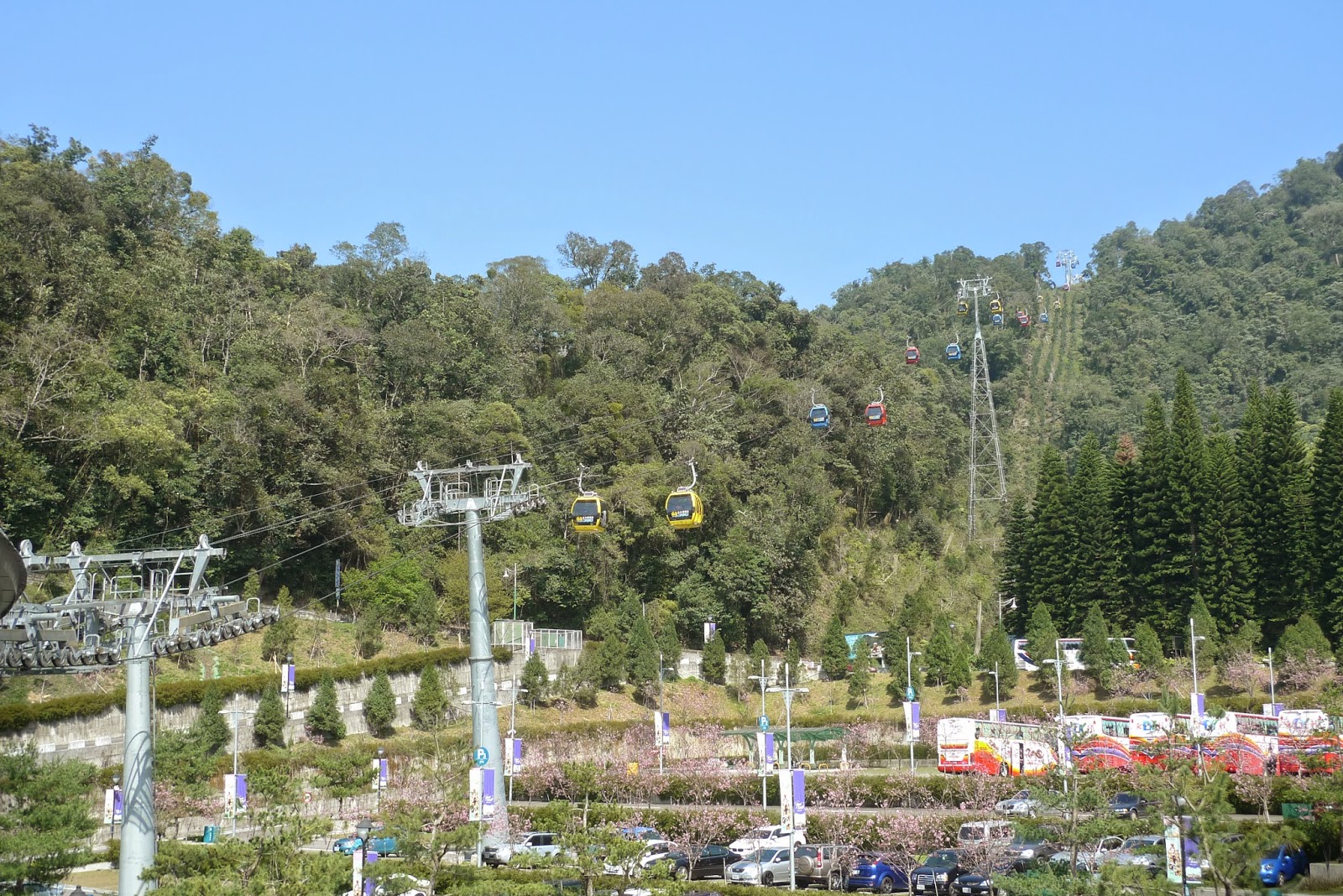 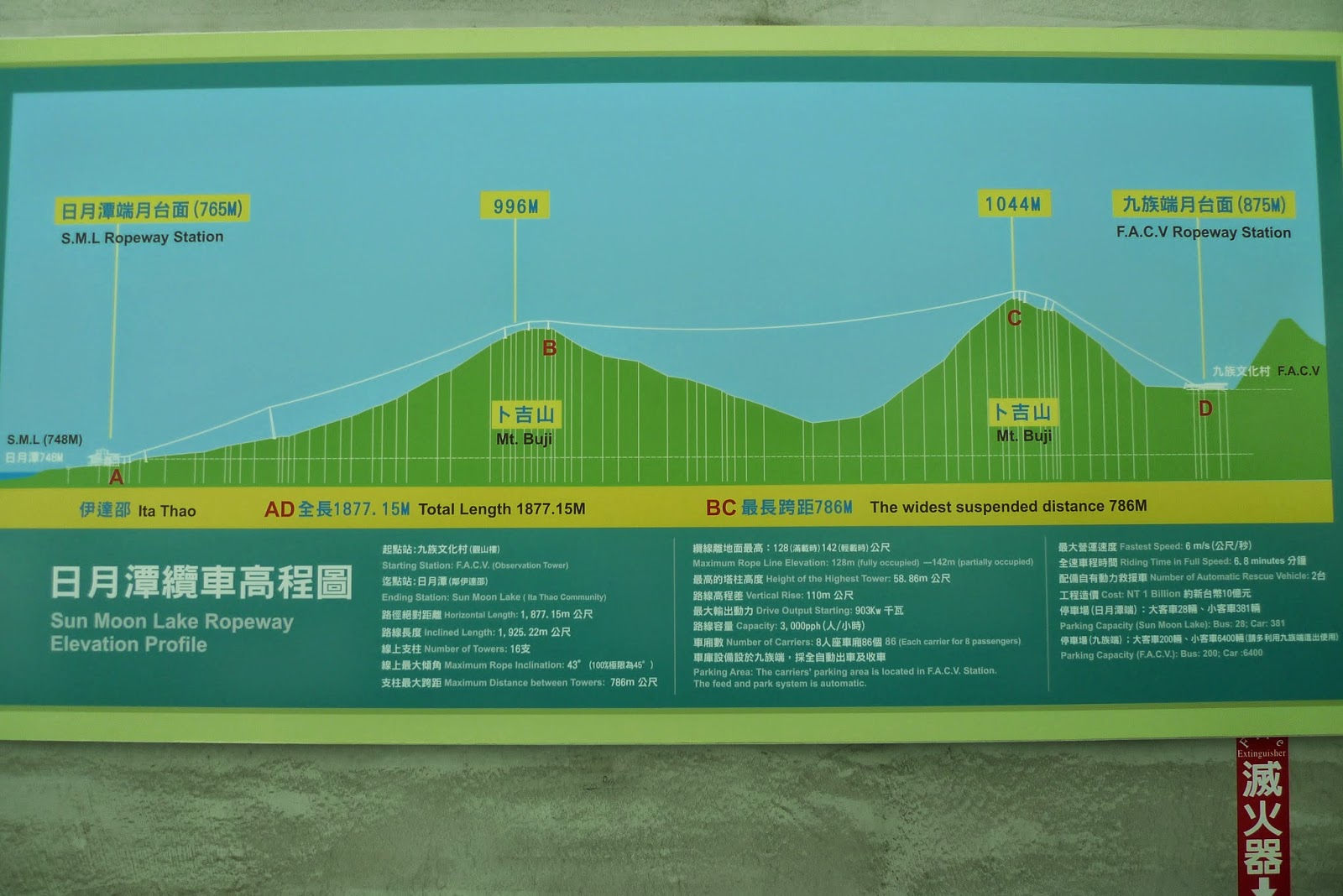 Every cable car has a special guest - Teddy bear from 18 Jan - 20 Apr and we had Teddy bear to accompany us for this ride.

Teddy bear accompany us for the ride 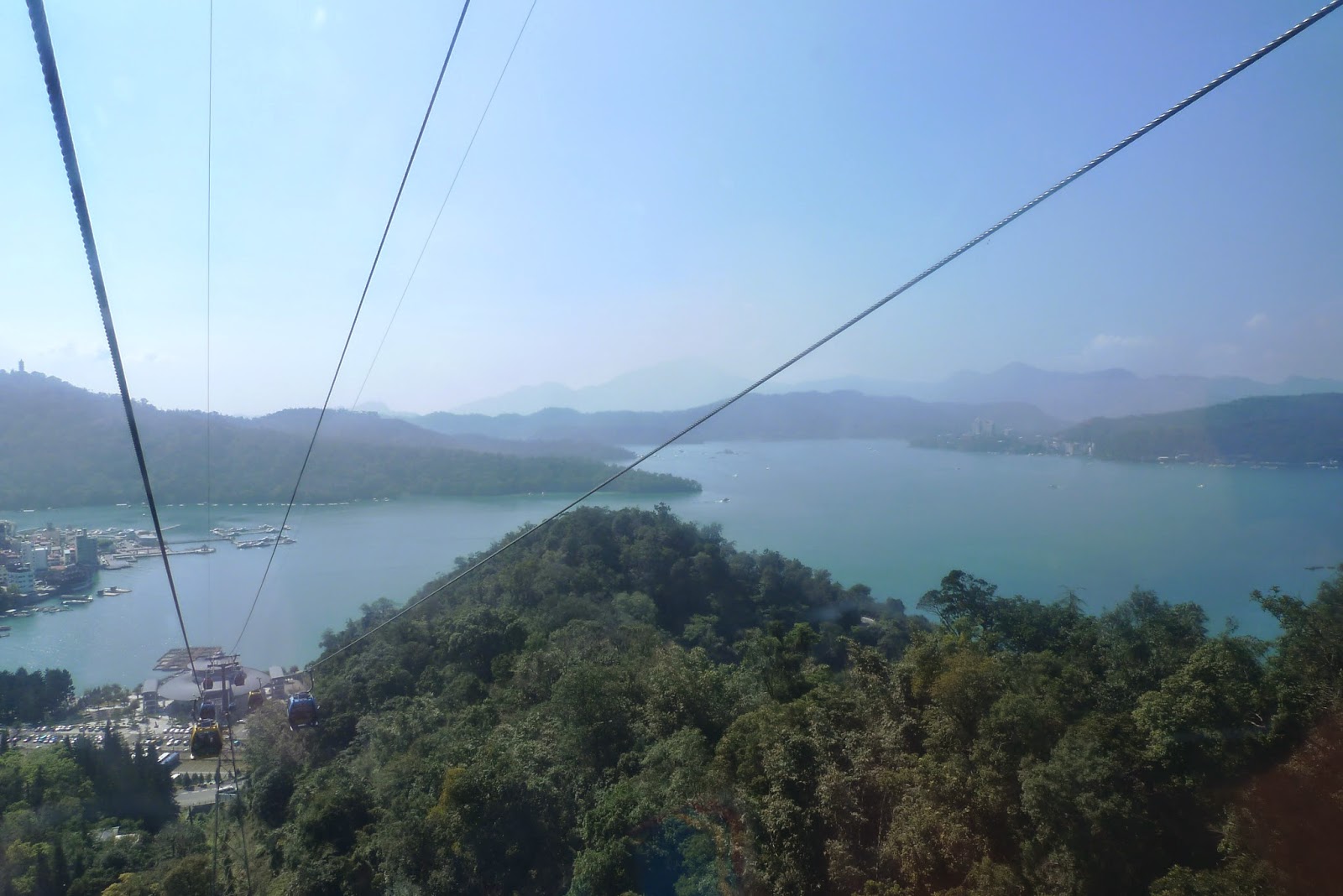 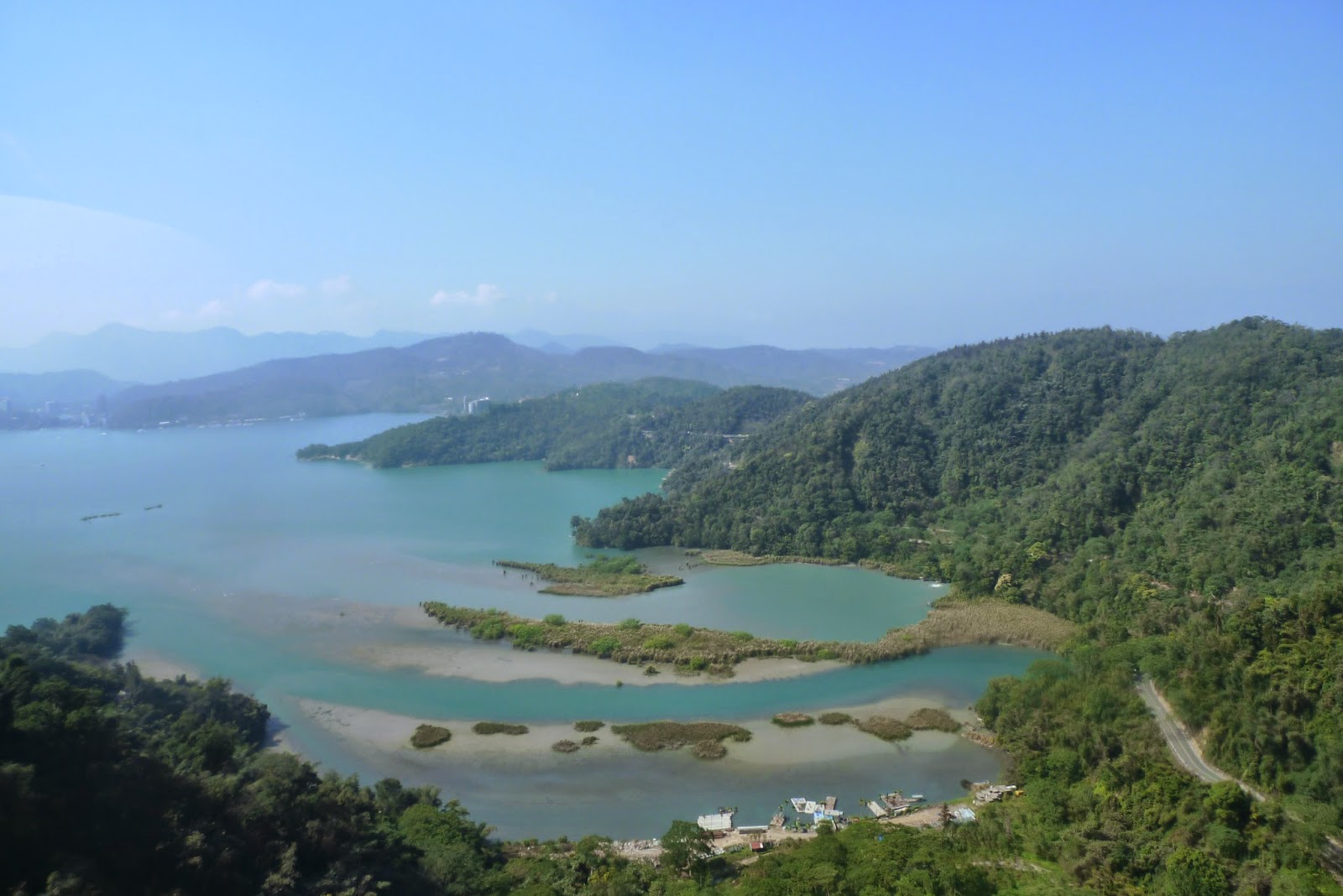 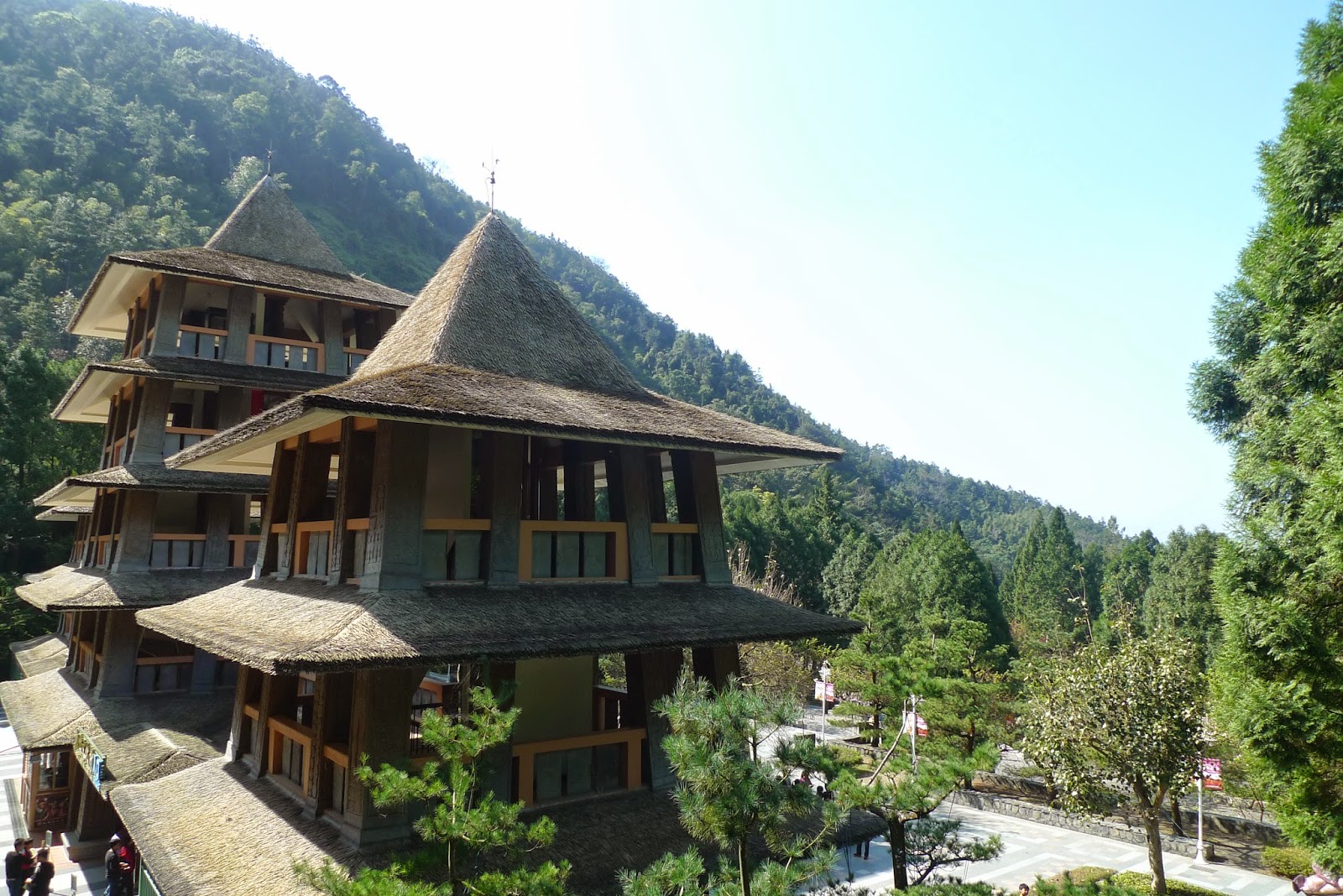 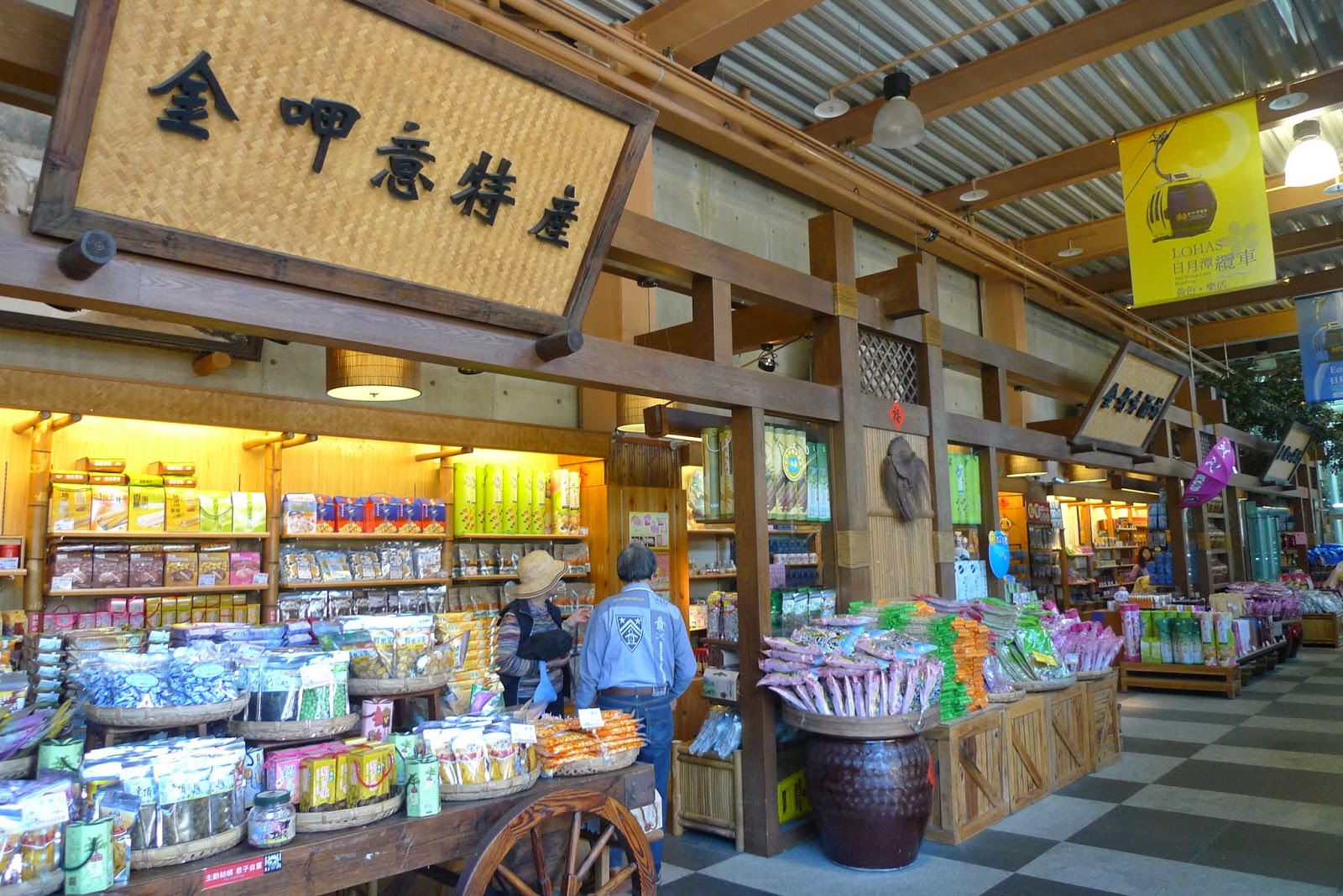 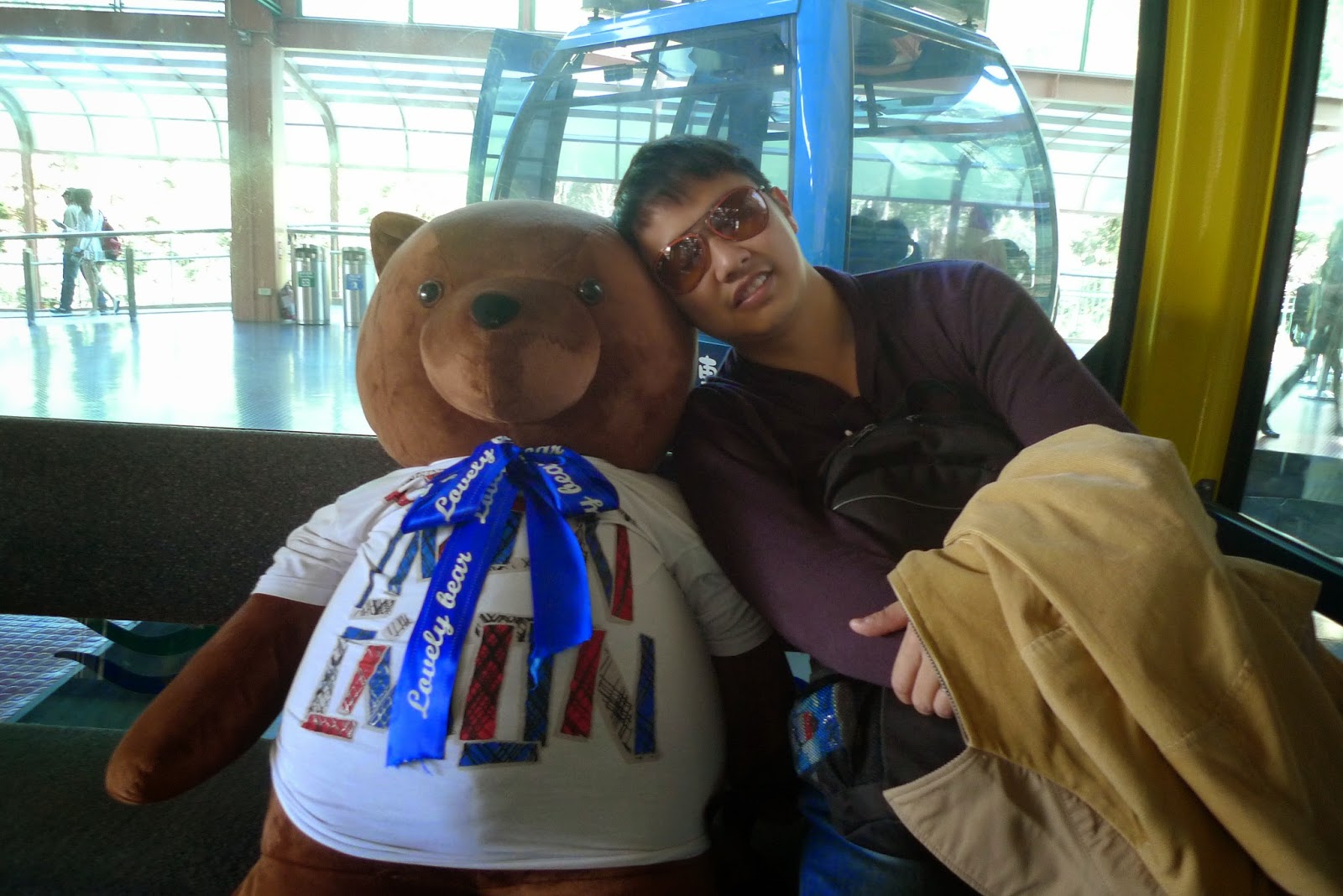 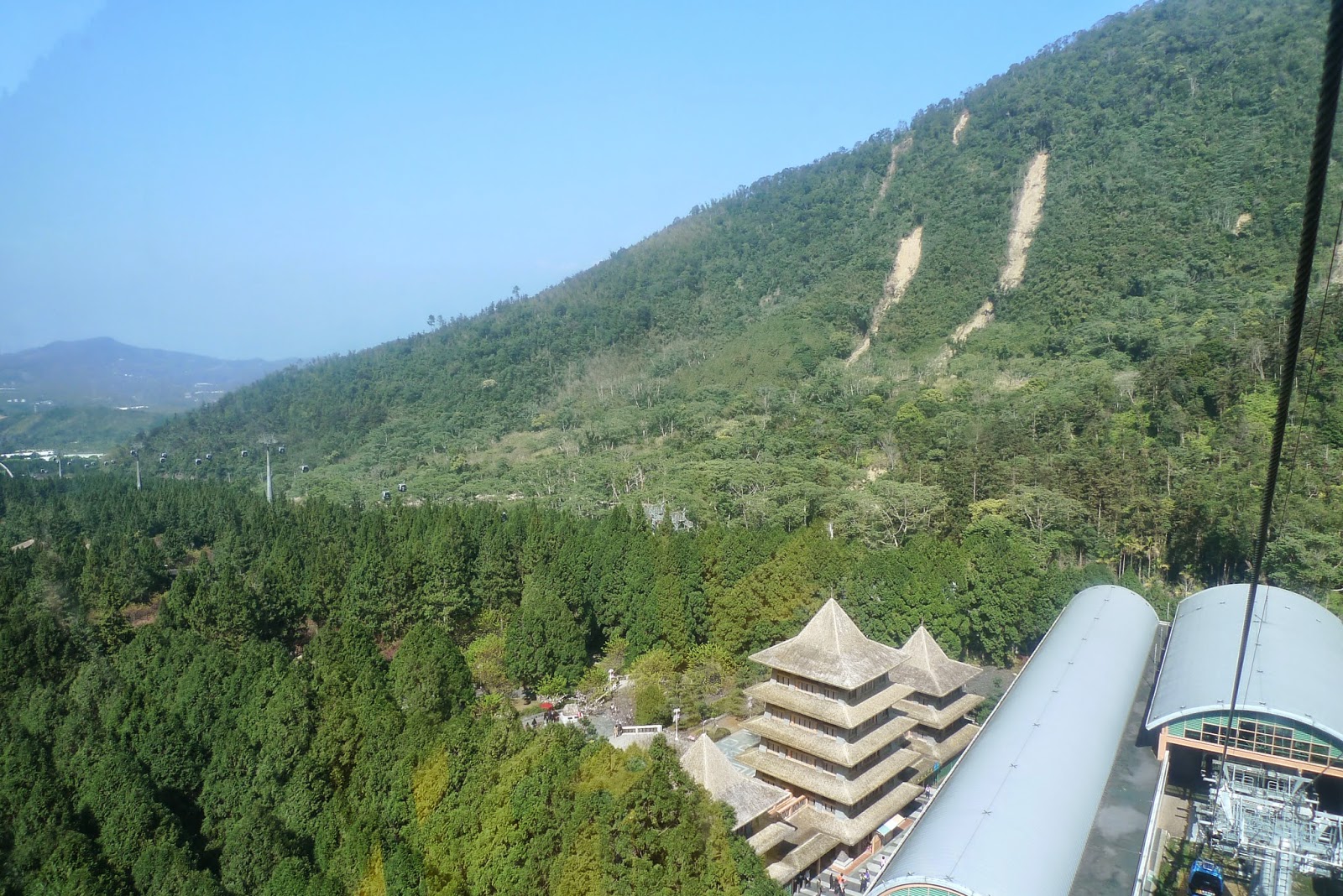 Can you spot the ropeway at the Formosa Aborigine Cultural Village?

We ran all the way from the cable car station to Itashao pier as we do not want to miss the next ferry. We managed to board the ferry before it departs. 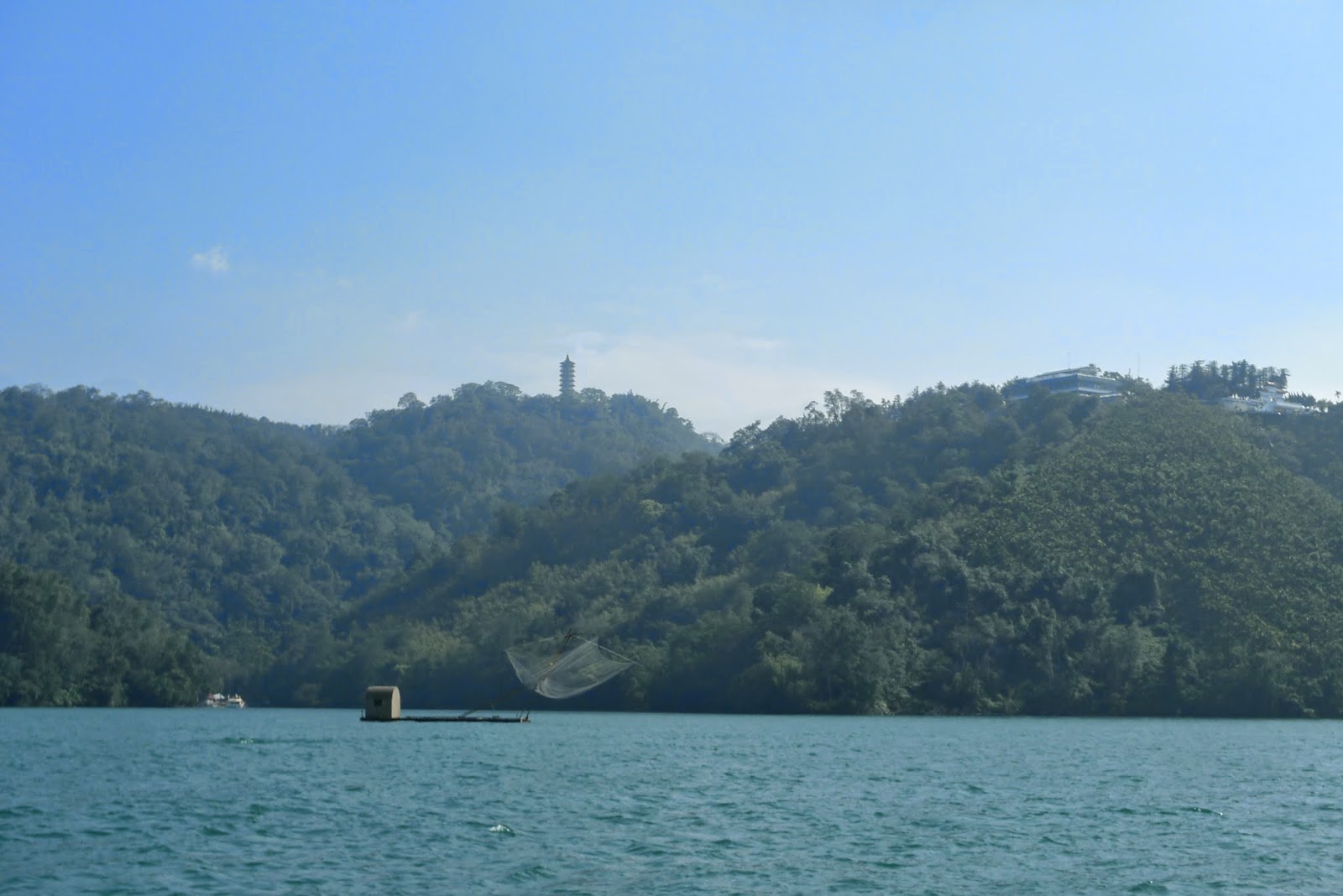 There is a famous Ah ma braised tea leaf egg 金门阿么茶叶蛋 stall at Syuang-guang pier. Each egg cost NT13 ~ S$0.40. The grandma who is selling the eggs is so famous that it bring to the notice of the tax authorities to check if this grandma is evading taxes. 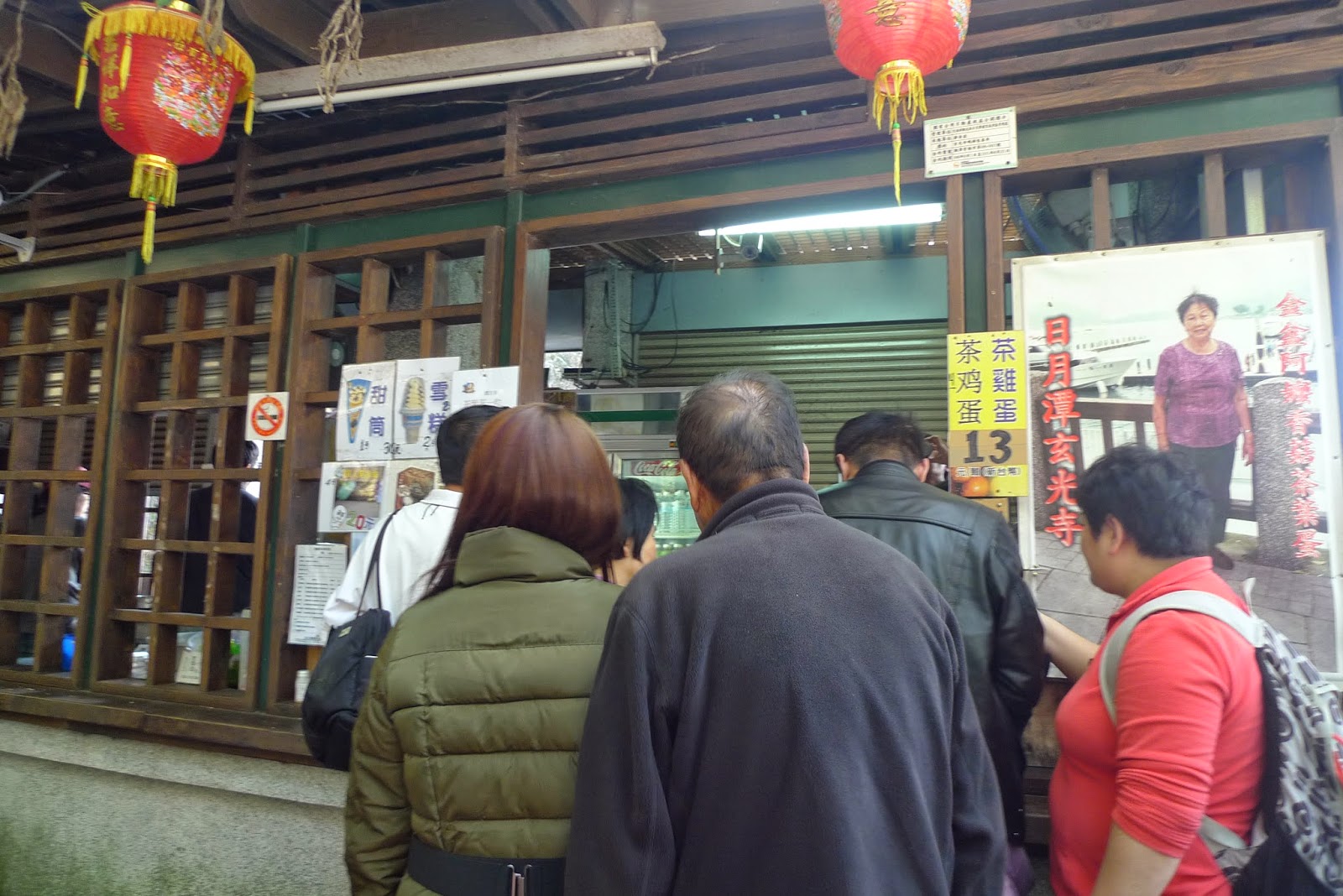 The egg is soaked with Assam tea leaves and is full of flavor, definitely one of the best tea egg which I have ever ate. 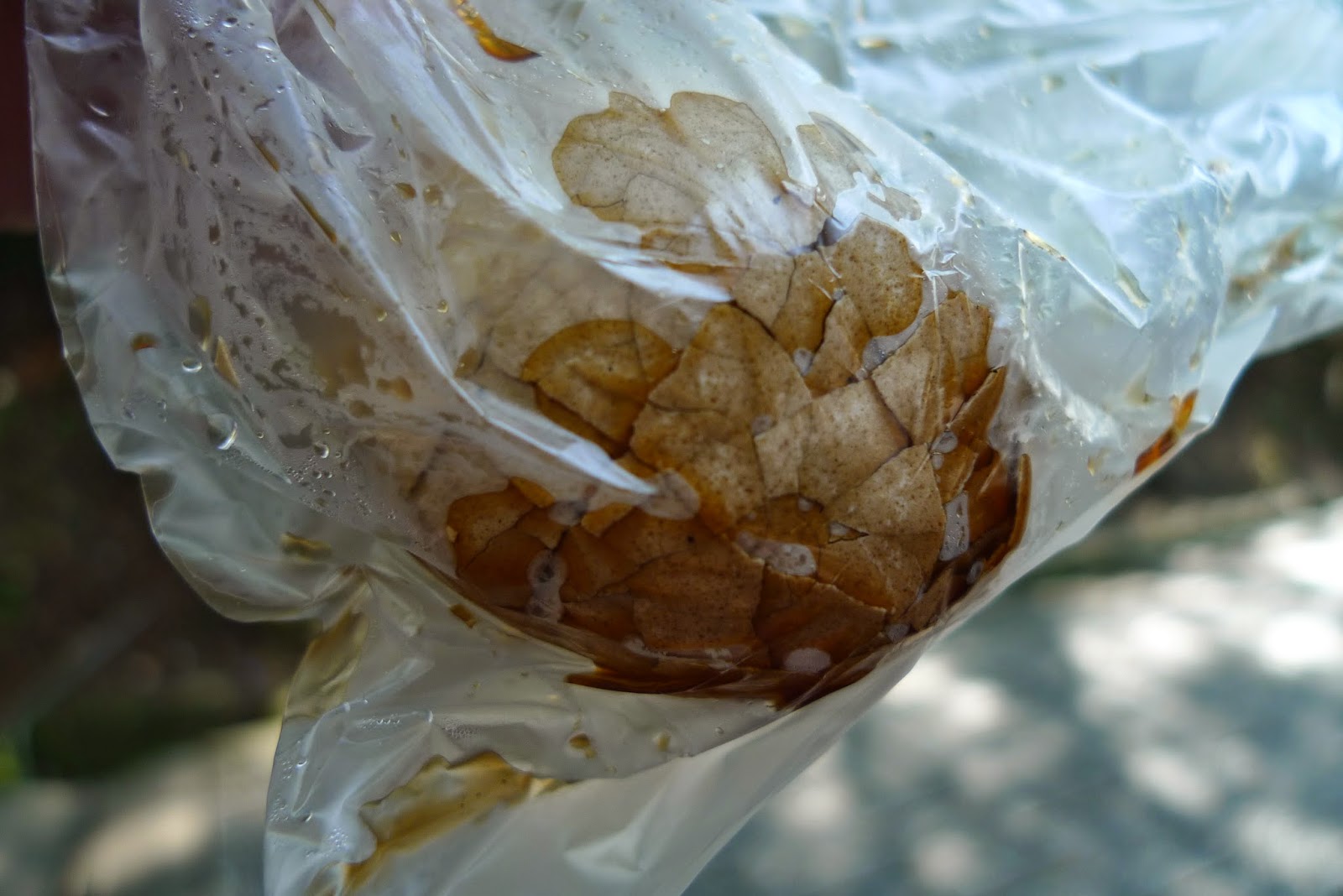 During the China-Japan War, Japanese took the Monk Xuanzang's remains away from Nanjing to the Tsen Temple of Saidama Ken in Japan. In 1955, the Monk Xuanzang's remains were returned back to the Syuan-guang Temple and moved to Xuanzang temple.  Xuangzang temple is located further up the hill and we skipped it because we are tired to climb the few hundreds flight of stairs. 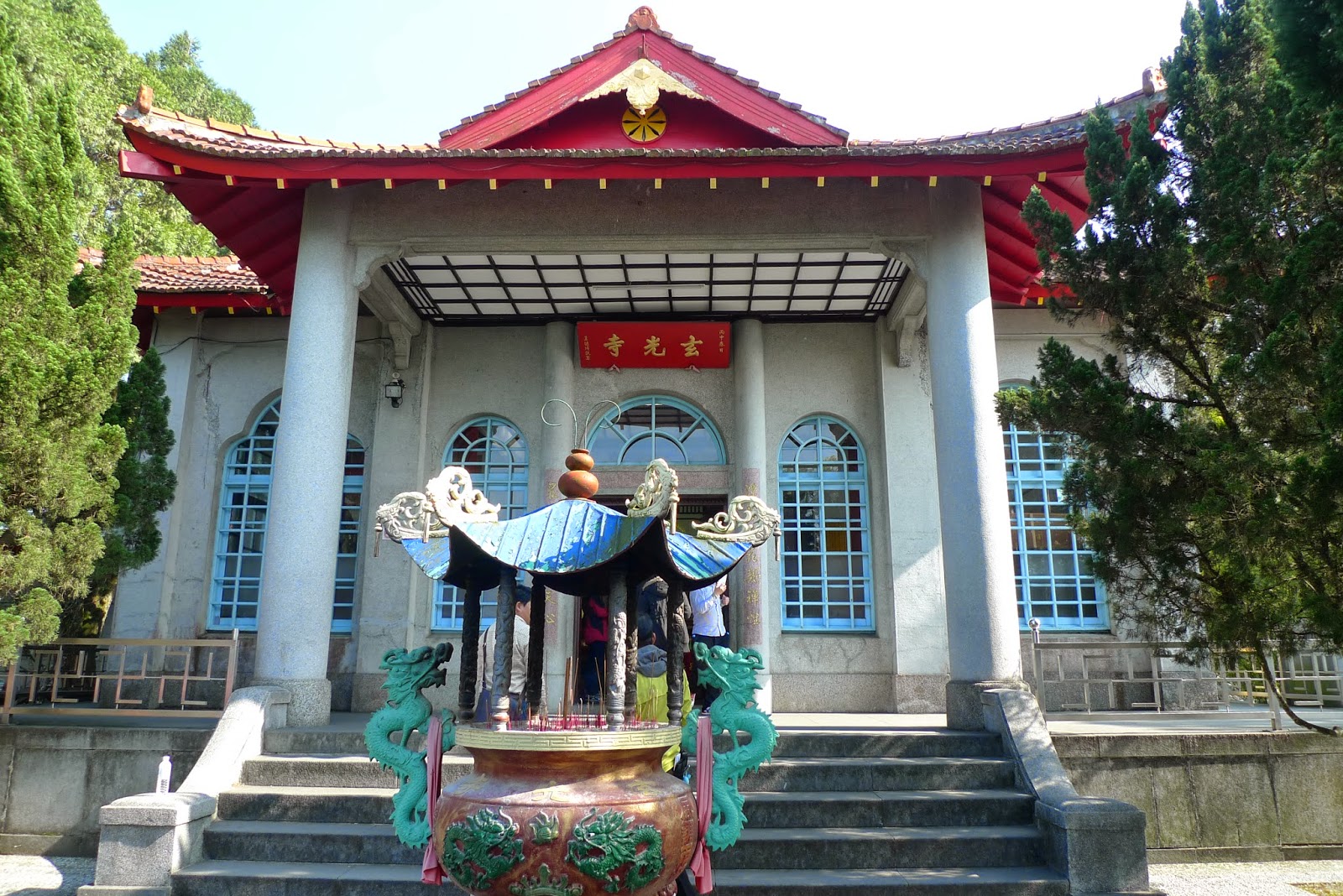 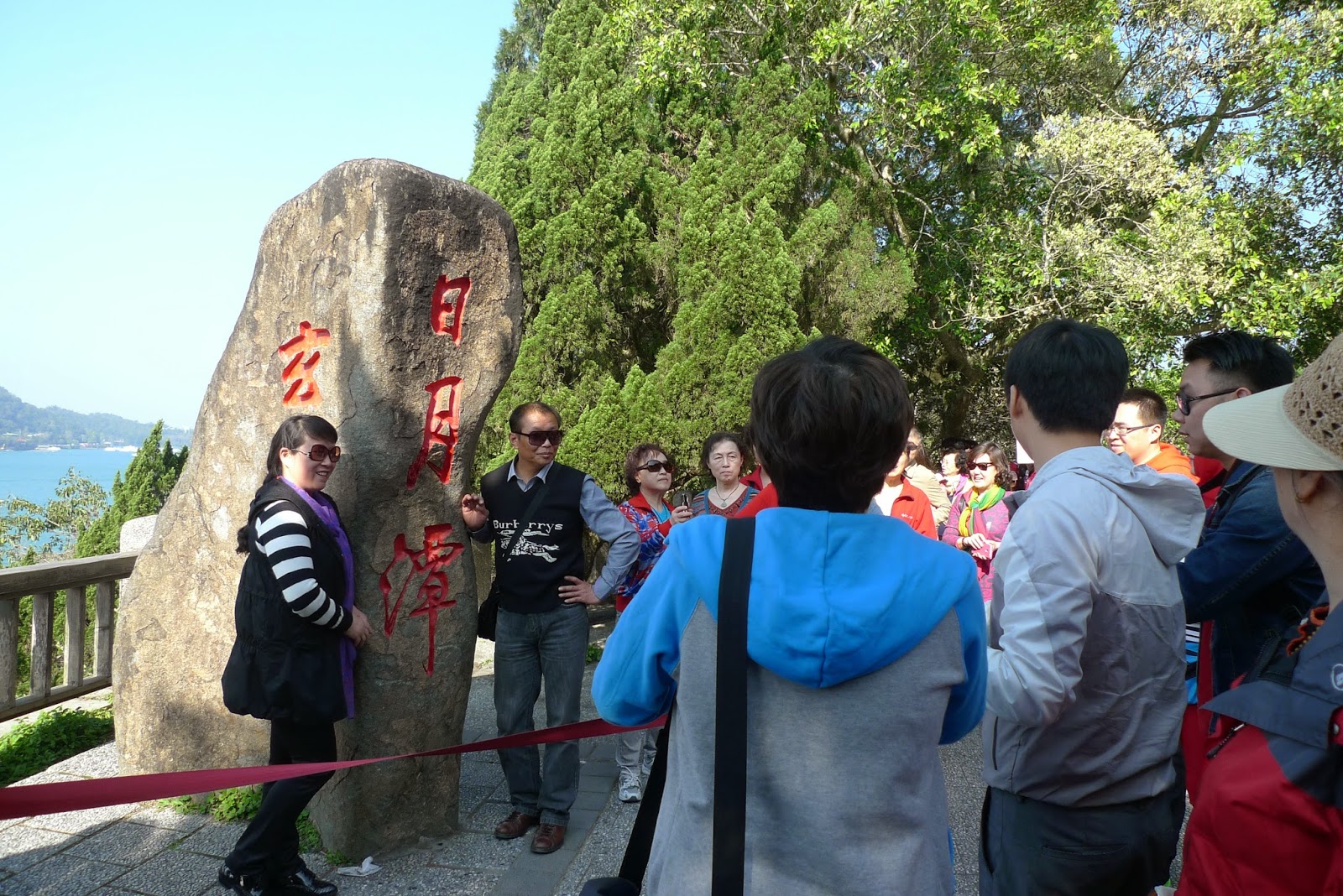 Lalu is an island in the centre of Sun Moon Lake. The island used to be much bigger, separating the lake into a part shaped like crescent moon and another part shaped like a round sun. When the island was still bigger, people used to live on it. Two events decreased the size of the island. First, construction of a dam in the 1930s raised the water level in the lake and thereby flooded almost the entire island. In 1999 the island shrank again during the 921 earthquake which resulted in the present size. 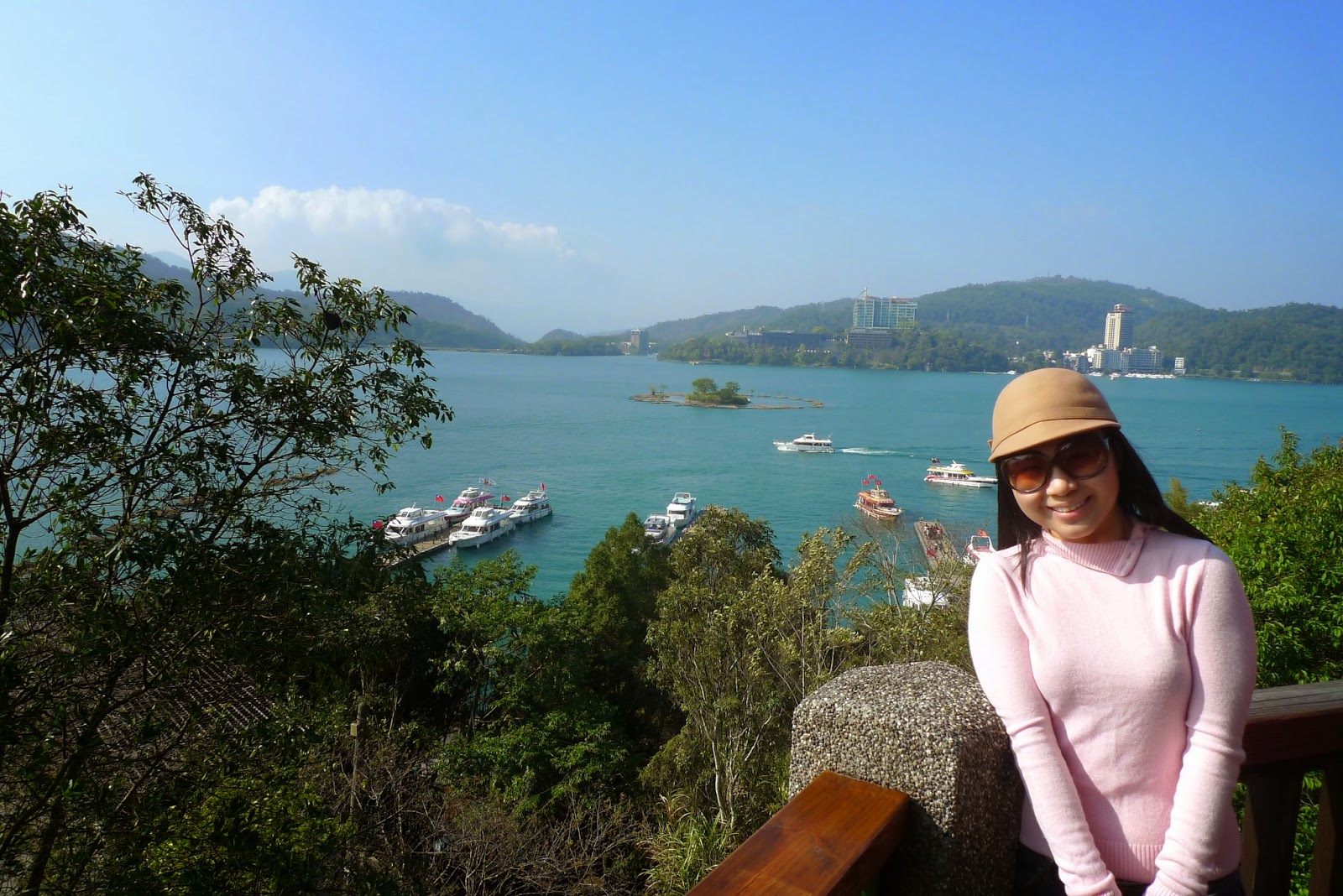 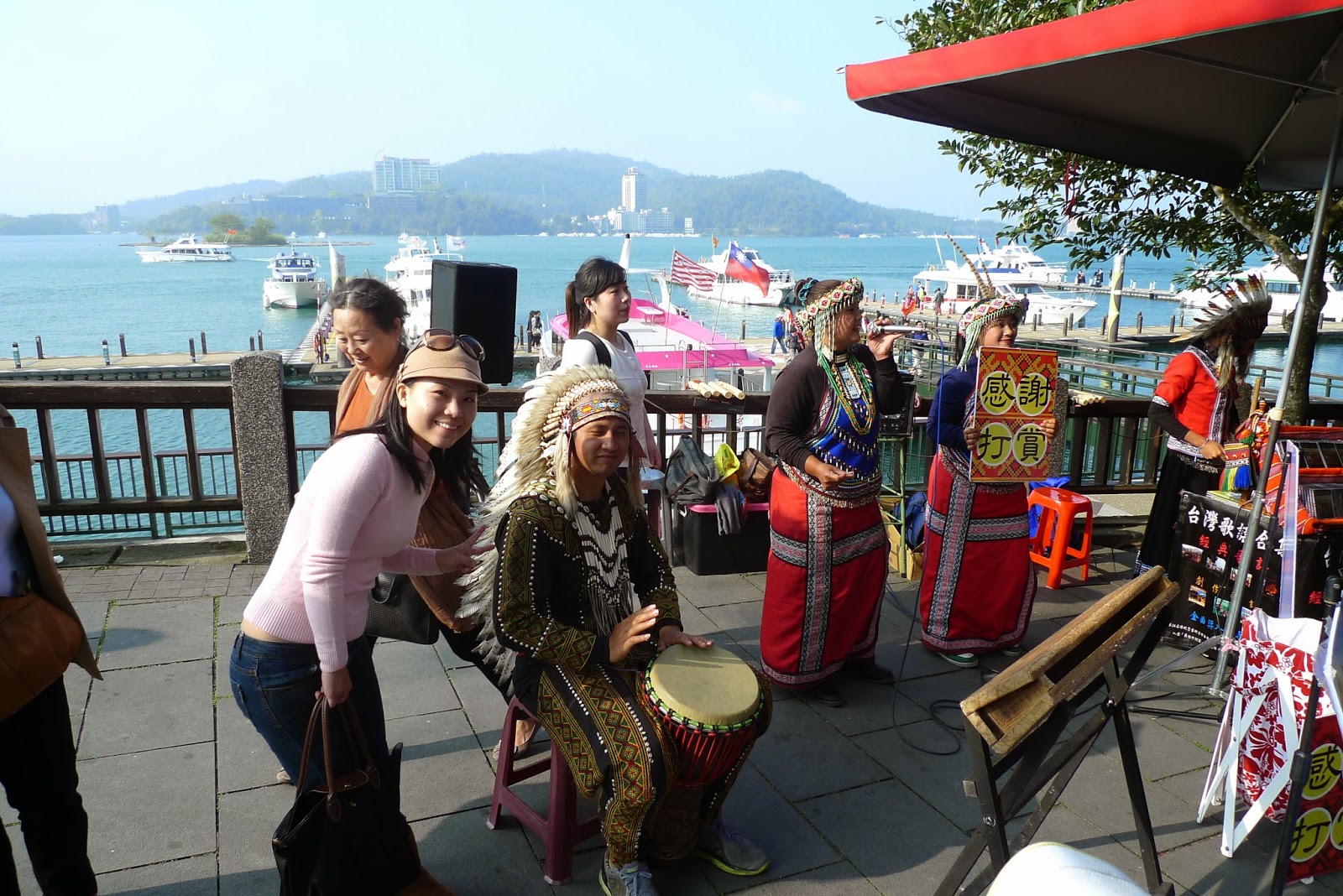 We return to the hotel for a rest and went out again in the evening. The room which I booked has no window but it doesn't matter since we are staying for one night. 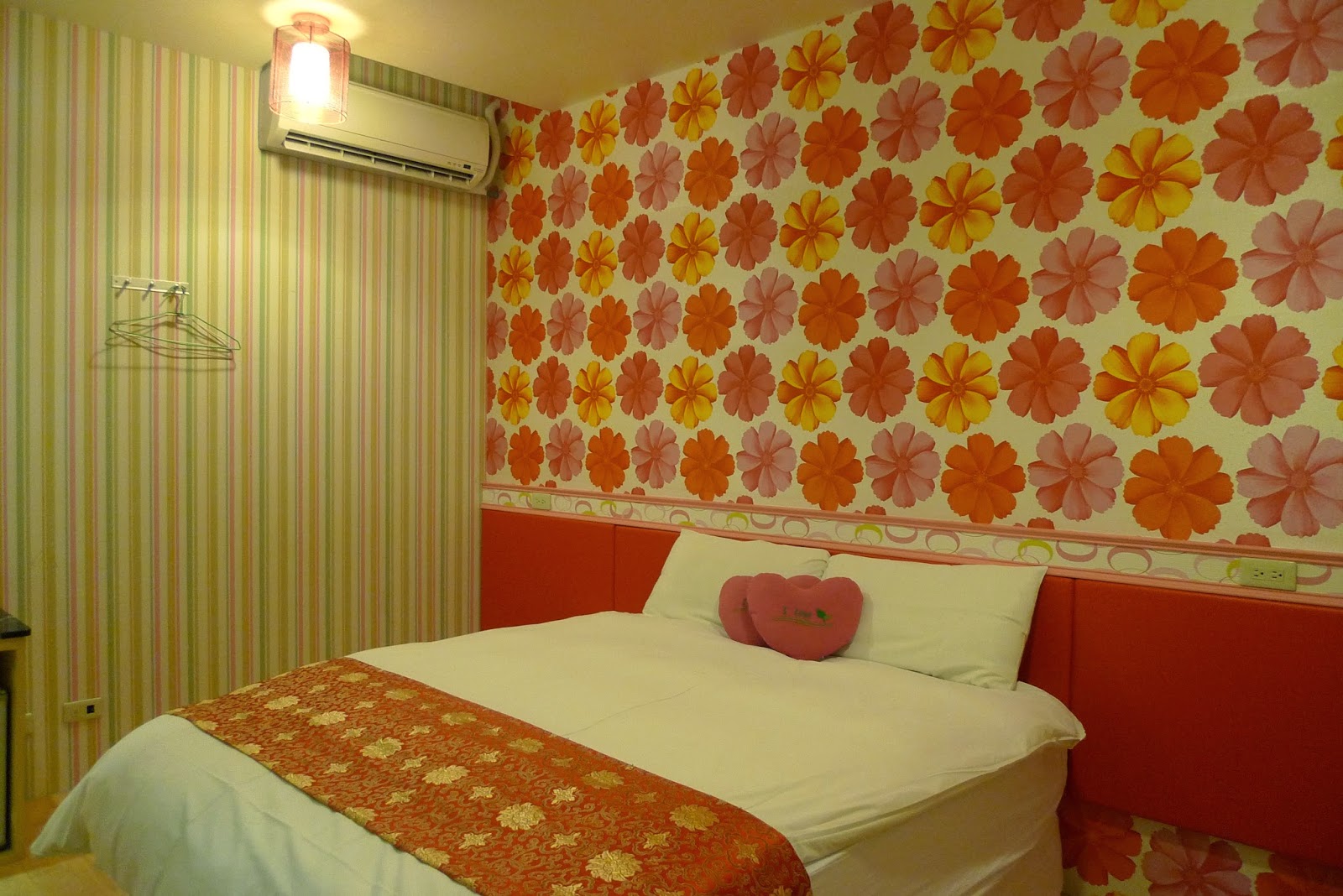 Room for the night

We have a bit of problem locating Sun Moon Lake Restaurant 日月潭 日月餐坊(Add: B2, No. 125, 日月潭水社村中山路) and asked a few locals before we managed to find it. We reached early at 6pm and were lucky to have a table. Those diners who came after us and have to wait for the existing diners to finish their meals as there are about 8 tables but the restaurant do not accommodate sharing of tables for diners.

I like the decoration of this restaurant as one feels homely inside here. The restaurant is full of Thao aboriginal craft such as the owl (auspicious animal for the Thao people) and the cashier table is converted from an old sewing machine. 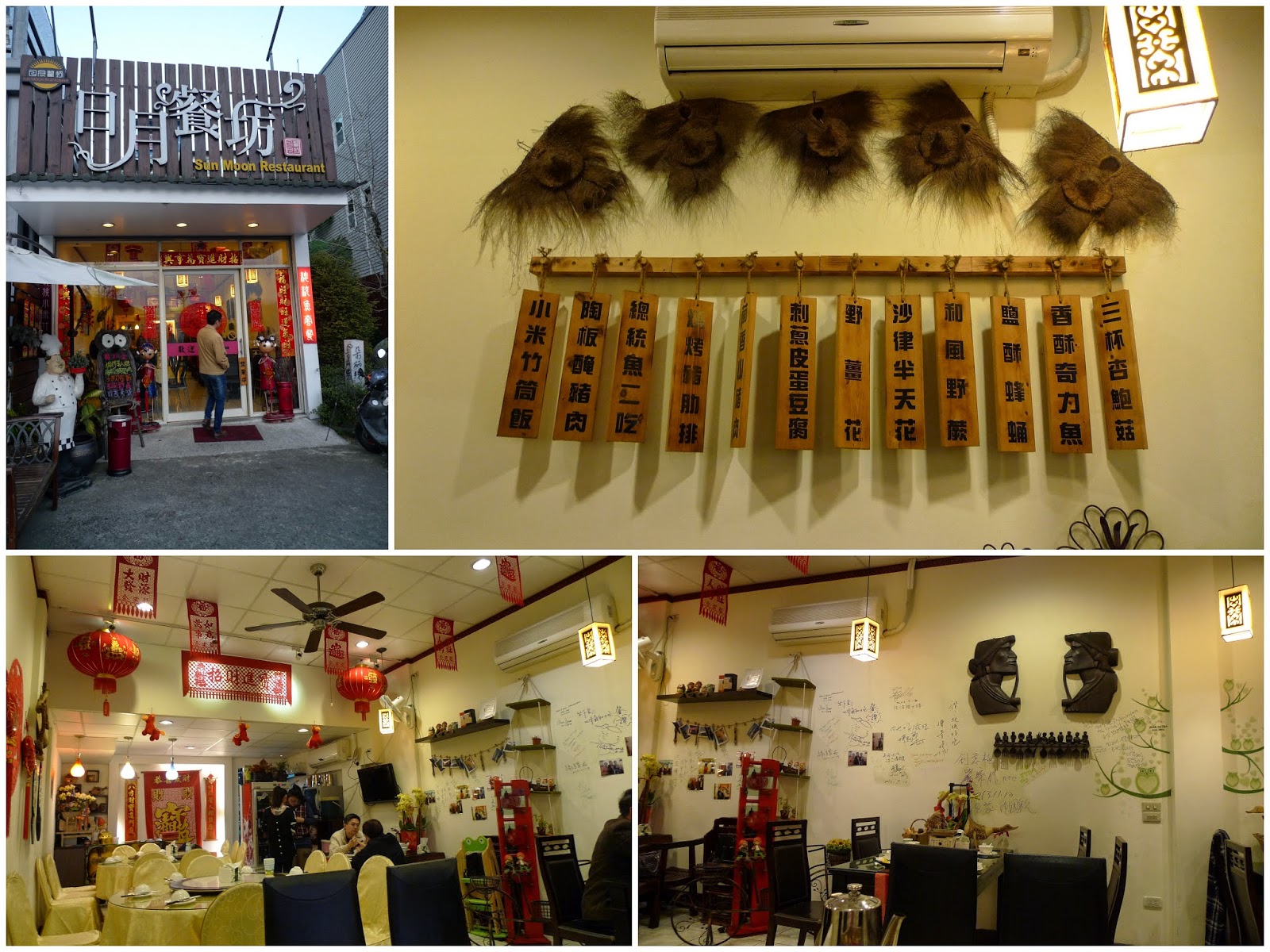 We ordered glutinous rice, wild boar pork, shaoxing prawn and a vegetable 过猫菜. We did not order the president fish 总统鱼 which is a famous fish from Sun Moon Lake because it's too expensive ~ S$50. The fish was called president fish as Chiang Kai Shek ate it when he visited Sun Moon Lake. 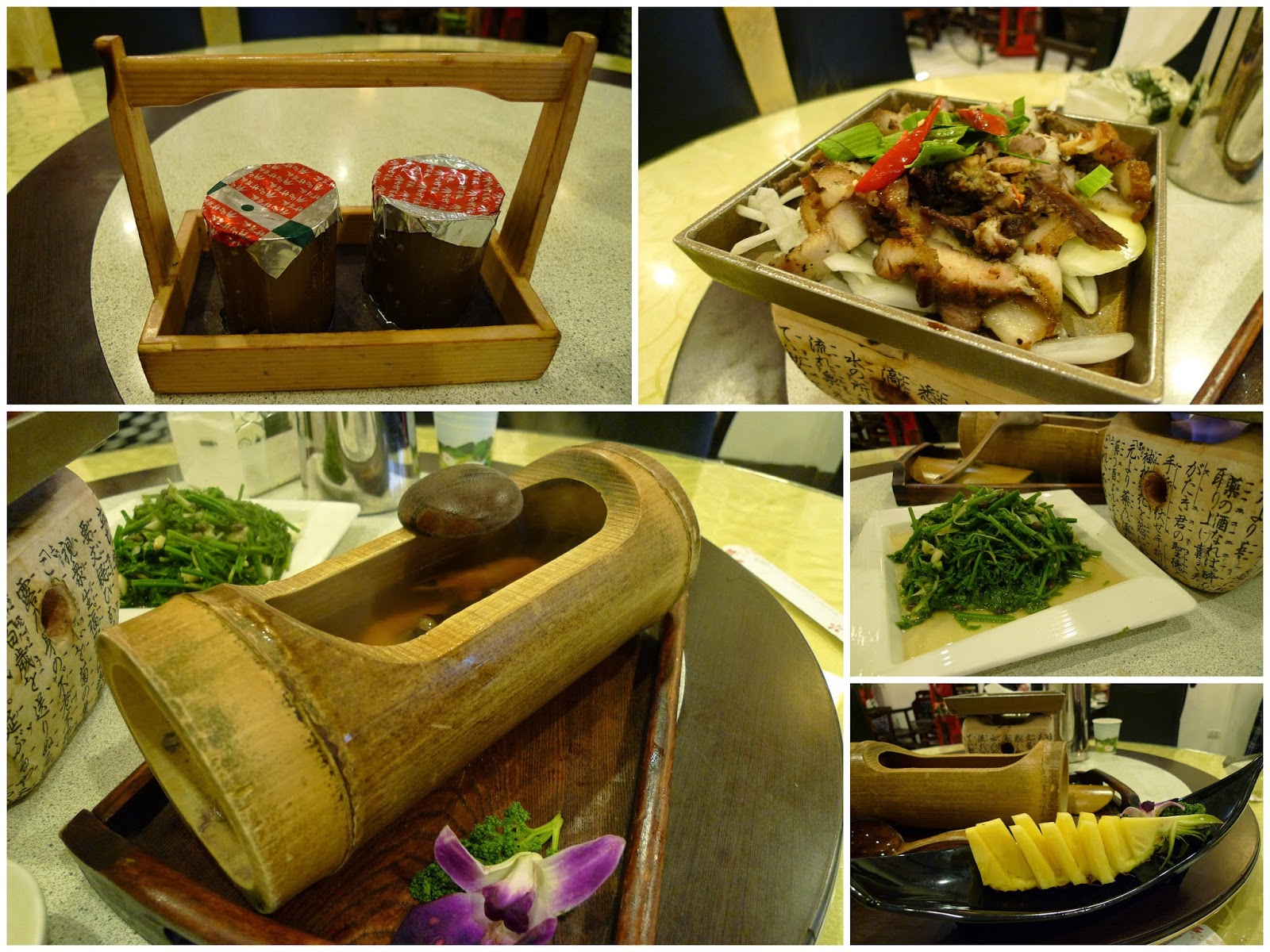 The night air was cold and can be chilling when the wind blew against us. We enjoyed the cool breeze while strolling back to the hotel.