Initially, I planned to wake up at 5.30am to watch the sunrise but I'm too lazy to wake up. In the end, I woke up @ 6.30am but there is no sunrise. I made a mental note to watch sunrise when I go to beach resort in the future. 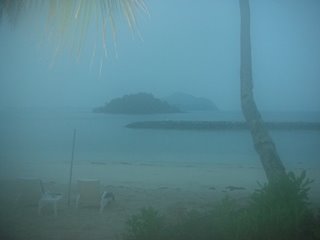 The breakfast spread is the same as yesterday. After breakfast, we went back to our room to pack up. After packing, we still have about an hour the check out time is 11am. Daiming suggested playing 7-up and the punishment is that the loser cannot sleep. In the end, everyone went to sleep cos it was raining and the weather was so good for sleeping.

We checked out at 11am and waited for the ferry which depart at 12.15pm. The journey back to Taman Leman Jetty is about 30min and rhen the journey back to Johor Bahru is another 2hrs. We informed the bus driver that we would be departing at JB checkpoint as we intend to shop around first. 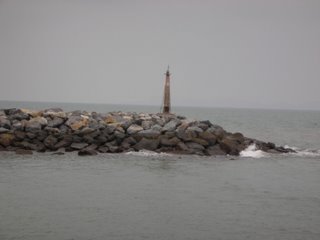 We had our lunch at City Square Secret Recipe. I order Chicken Cordon Bleu and Chocolate Fudge cake which only cost RM 24 ~ S$10 which is impossible to get this price in S'pore. After lunch, we decided to go to Holiday Plaza to shop. The taxi trip there cost RM 6 ~ S$2.50. Chew Hiang and I went to trim our eyebrow which cost RM 10 ~ S$4 and Daiming also trimmed his eyebrow. I was a bit shock initially as I seldom see guys trimming their eyebrow. It was the 1st time for Daiming.

Luckily, there was no jam and we went through both checkpoints at a breeze. Frankly speaking, I only went to Malaysia twice a year - once in Chinese New Year and the another during Ching Ming Festival. Sometimes the queue is at least an hour which is why I'm very reluctant to go to Johor Bahru.
>>Epilogue
Posted by Jerlin Tan at 9:23 pm