We had complimentary breakfast at level 1 beside the lobby. The breakfast is buffet style with a mixed variety of Asia and Western food. 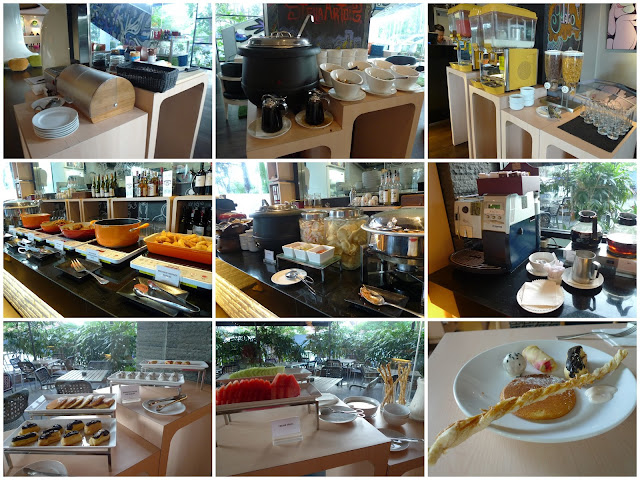 
Our first attraction in Surabaya is Suramadu bridge. This is the longest bridge in Indonesia and connects the mainland Java to Madura island. Actually I have asked the driver to stop the van near the shore for us to take photos, but there is no stopping point there hence we have to cross the bridge to Madura island. The toll fee is IDR70,000 ~ S$9 is payable when crossing over to Madura island. There is no toll fee for the trip back. 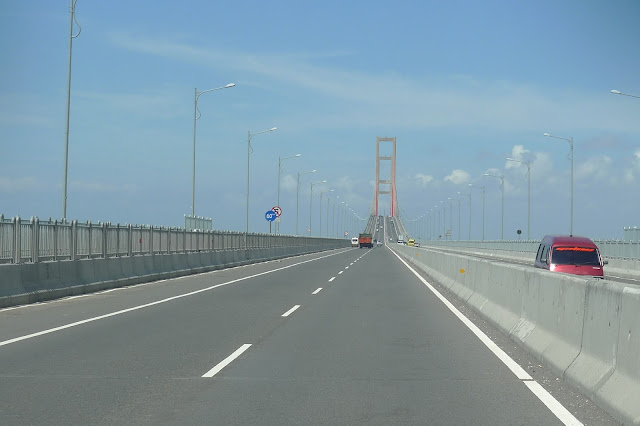 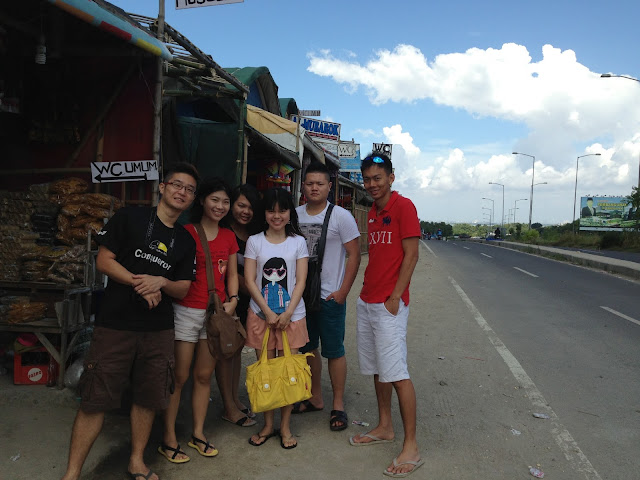 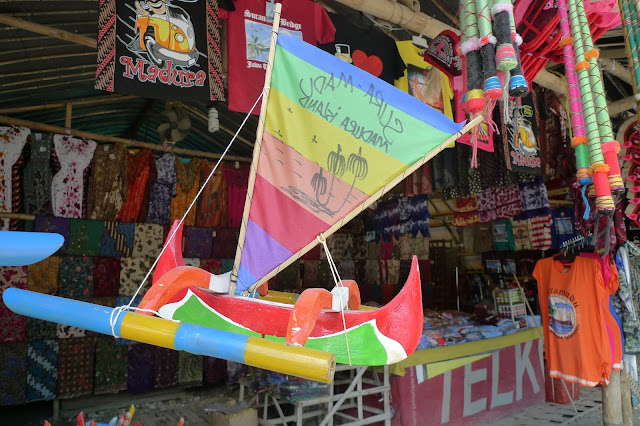 This boat reminds me of Lombok


We returned to Surabaya and visited Masjid Ampel. Masjid Ampel is the most sacred mosque in Surabaya hence female are required to wear conservatively even when one is nearby the area. We could not go near the mosque as we are wearing shorts hence we waited nearby for the guys who could went to the mosque with our guide. 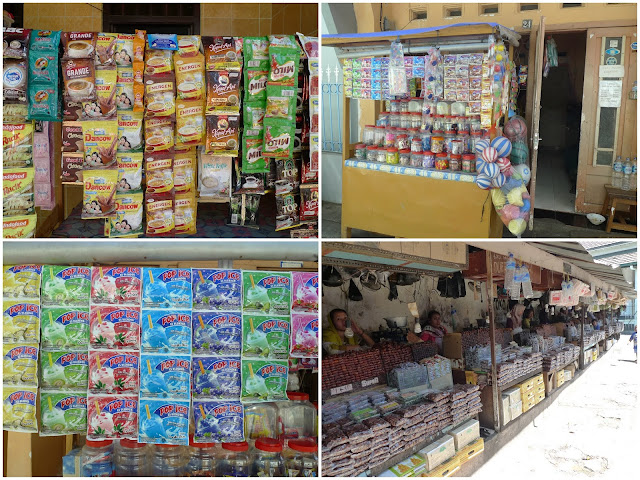 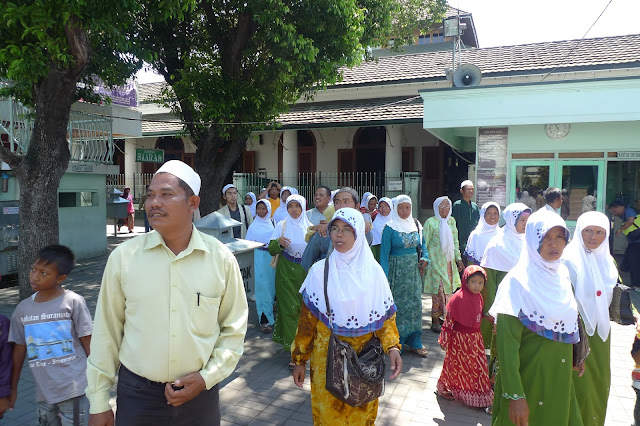 All females are fully covered and wearing hijab 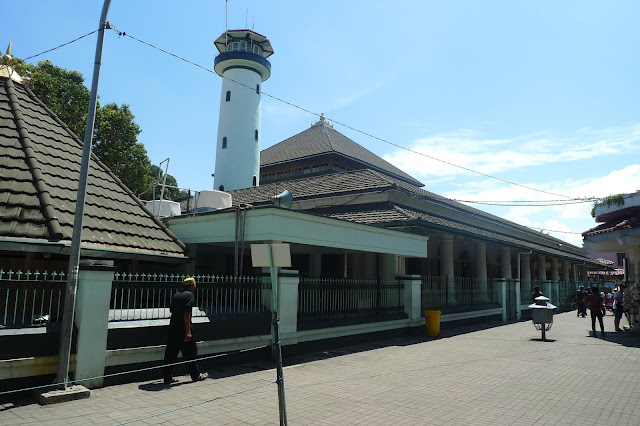 The driver has passed by Hotel Majapahit and we took photos from the road. I have planned to have high tea here but we didnt return later due to terrible traffic jam in Surabaya. 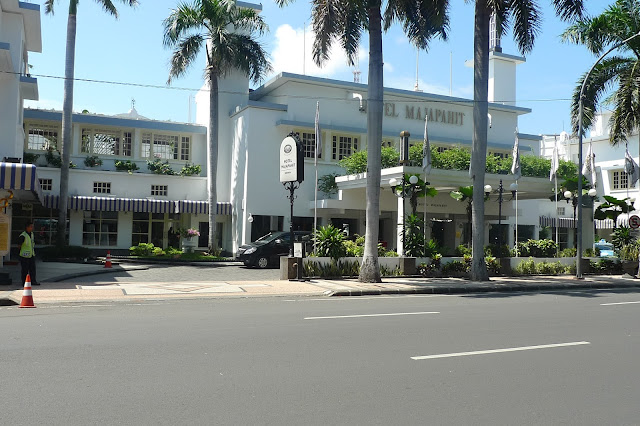 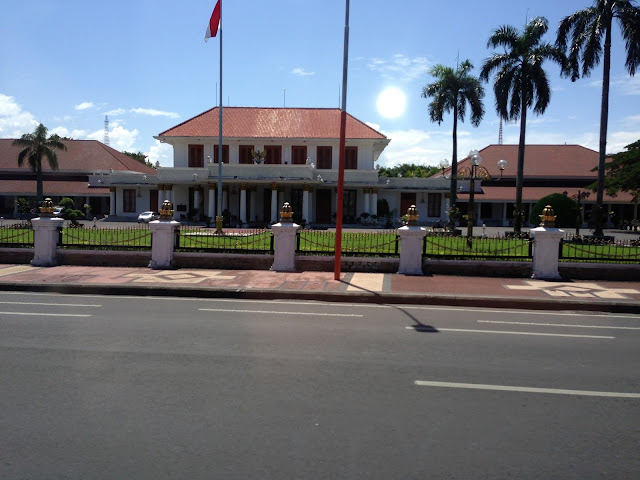 
We visited Masjid Al Akbar Surabaya which is the largest mosque in Surabaya. I have forgotten the opening hours of the minaret but it is not open during 12 - 1pm and admission is IDR5,000 ~ S$0.60. Females are required to be dressed conservatively and renting of the robe is available here. 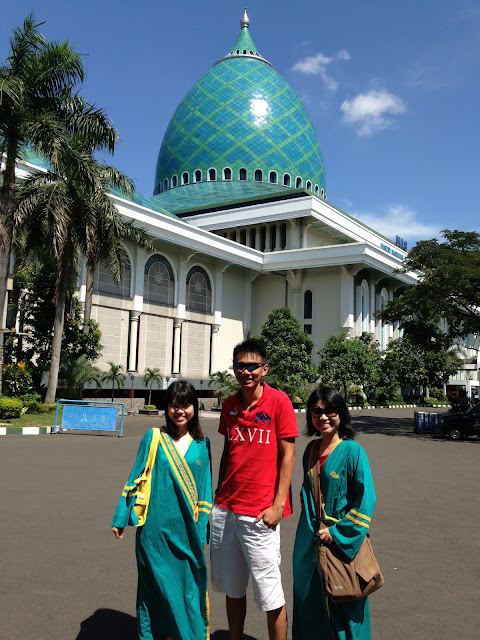 The lift from the ground level to the top of the minaret is small and extremely slow. I feel that it took almost 5 min to reach the top which is 65m tall. The view from the top is not spectacular at all and the viewing panel is quite dirty. 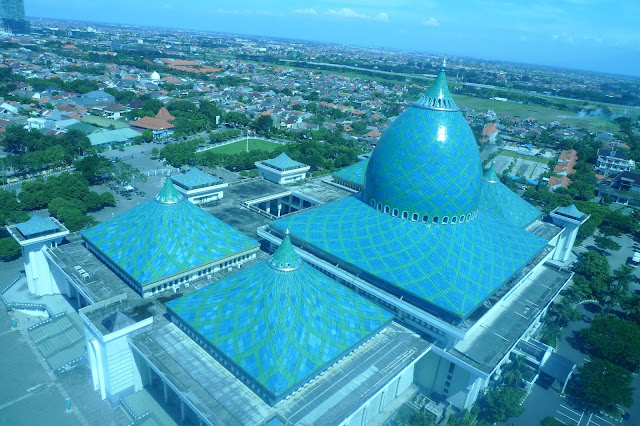 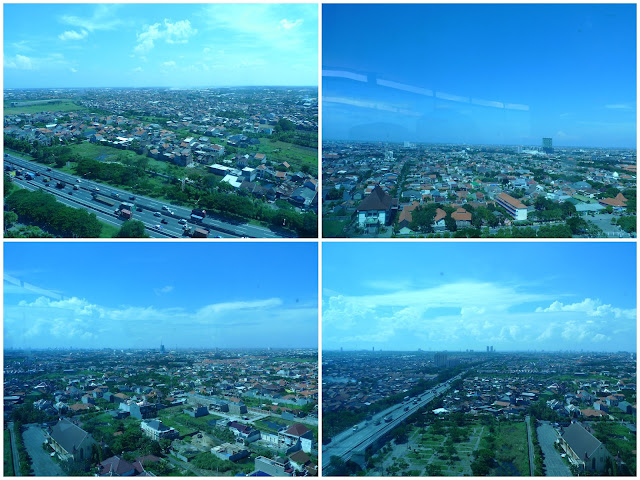 View from the minaret


We had a tour around the mosque after coming down from the minaret. 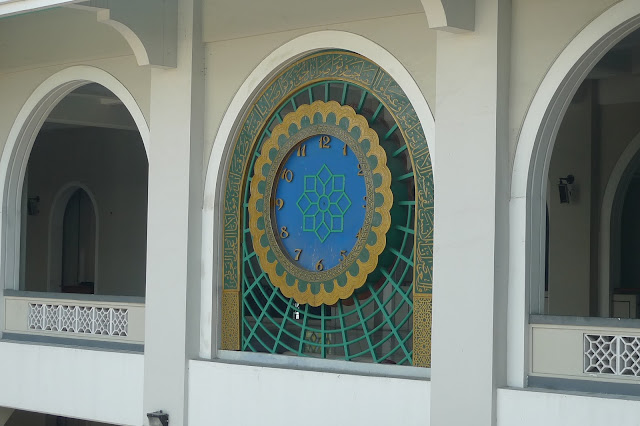 A clock with missing hands 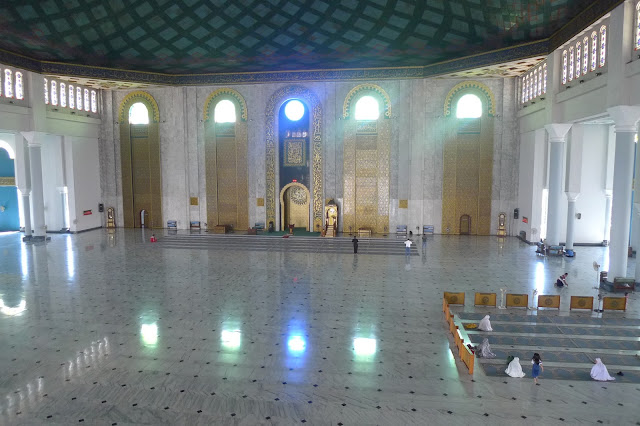 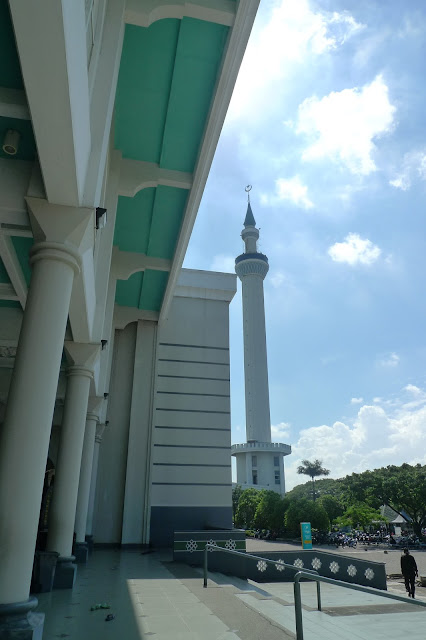 We had lunch at Ayam Bakar Prima Rasa and there are few outlets in Surabaya. 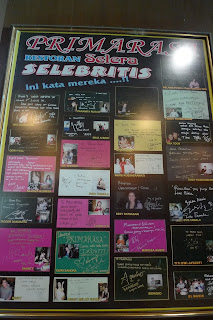 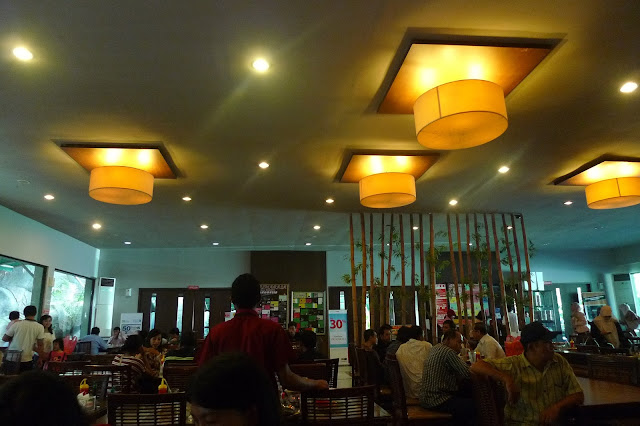 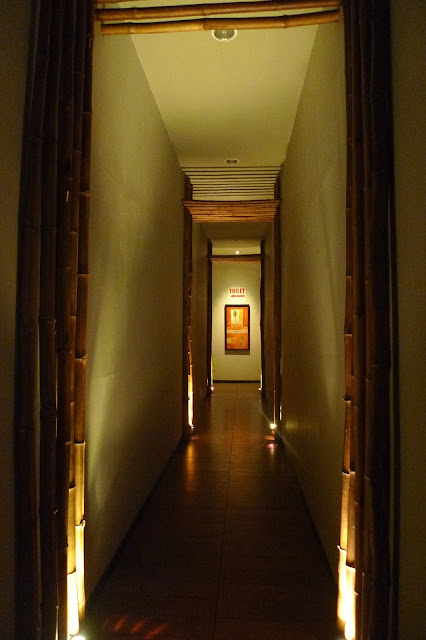 Corridor leading to the washroom


We ordered ayam bakar, gurami bakar, gurami goreng and satay. Gurami fish is quite a popular dish here as it is recommend in most of the restaurants. 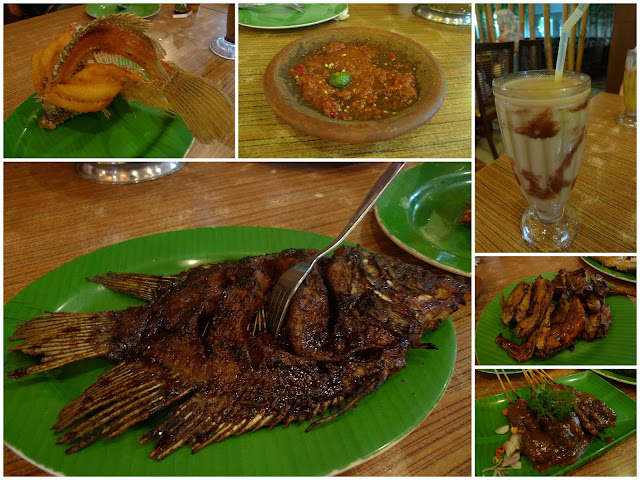 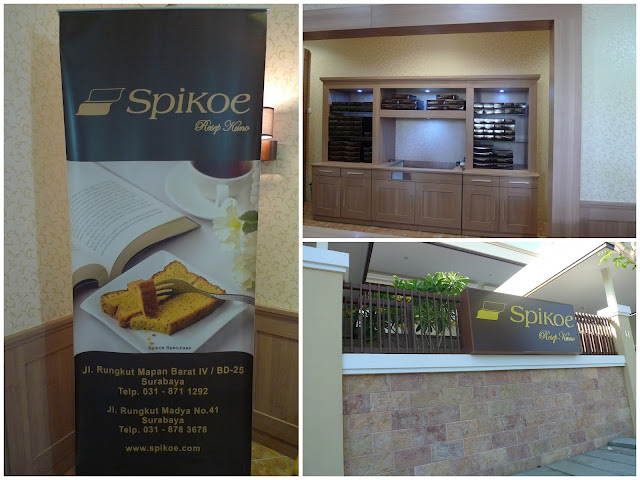 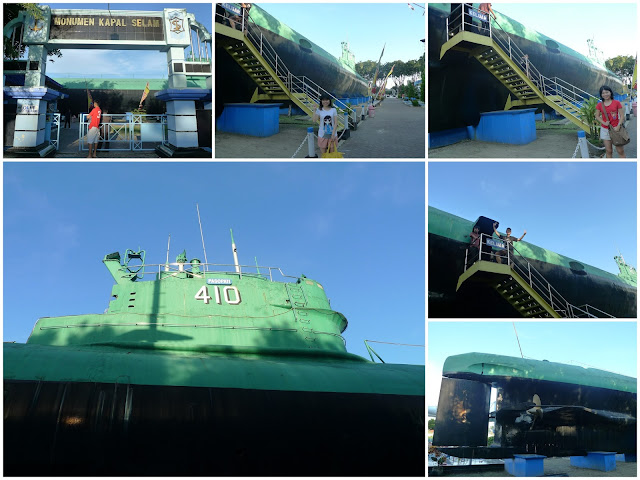 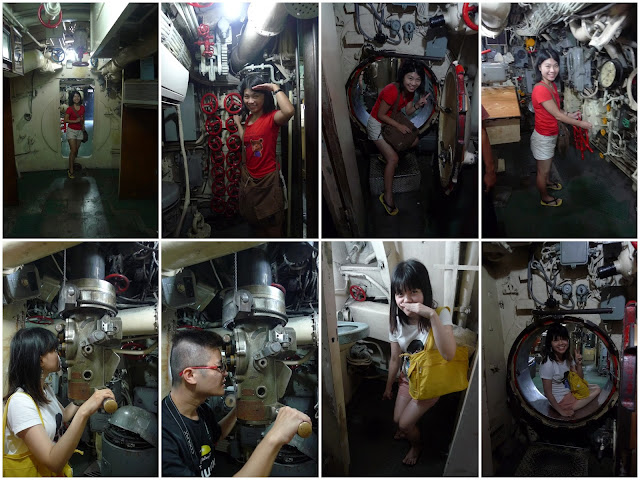 
There are few statues of the crocodile and shark in Surabaya. Surabaya is locally believed to derive its name from the words "sura" (shark) and "baya" (crocodile), two creatures which, in a local myth, fought each other in order to gain the title of "the strongest and most powerful animal" in the area according to a Jayabaya prophecy. 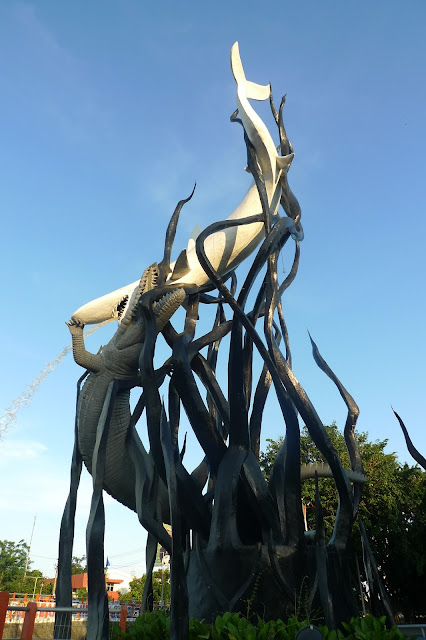 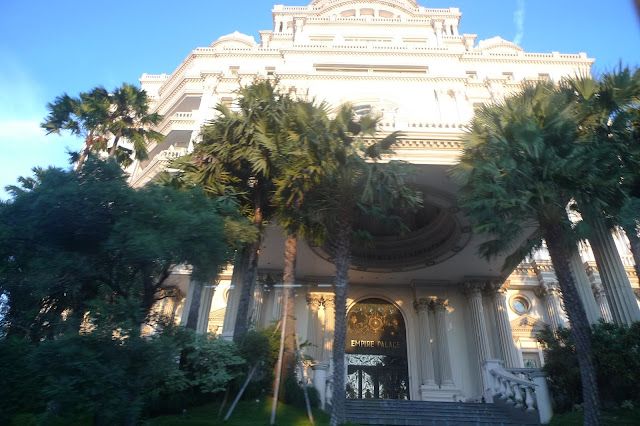 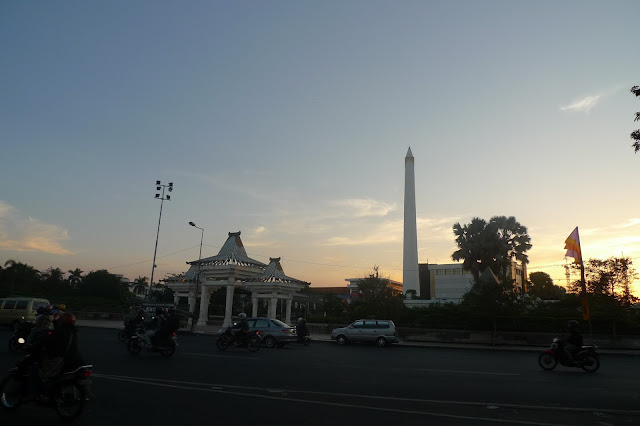 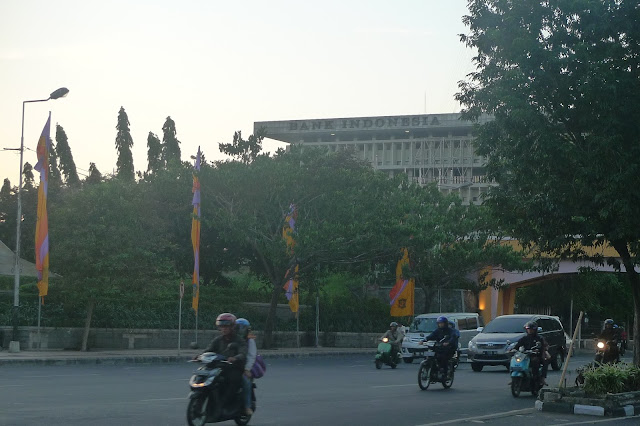 
Our driver seems to have a bit of difficulty finding Masjid Cheng Ho and by the time we reached the mosque, the sky has already darken at 7pm. Our guide told us that we can take photos from the road and can not enter the mosque. Masjid Cheng Ho looks like a Chinese temple from afar and doesn't resemble a mosque at all. 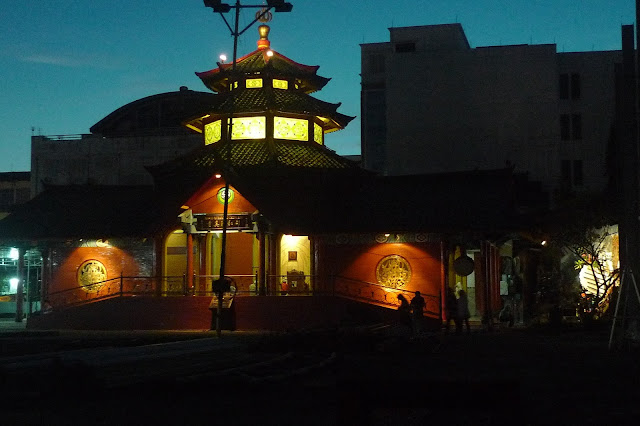 
We had dinner at D' Cost Seafood. The waiter here is not proficient in English hence we pointed to those photos hanging on the wall to place our order. The food served is mediocre and I am very disappointed with the food eaten in Surabaya. 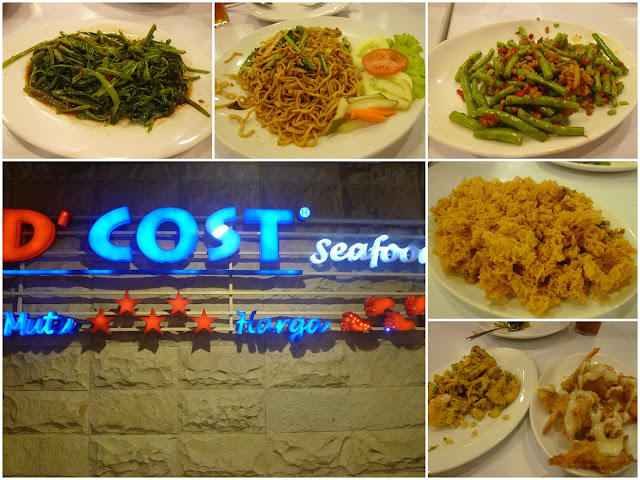 After our dinner, we told the guide that we want to go for massage. The driver drove to a street where there are several massage shops. However these massage shops look sleazy hence we return to the hotel and rest for the day.