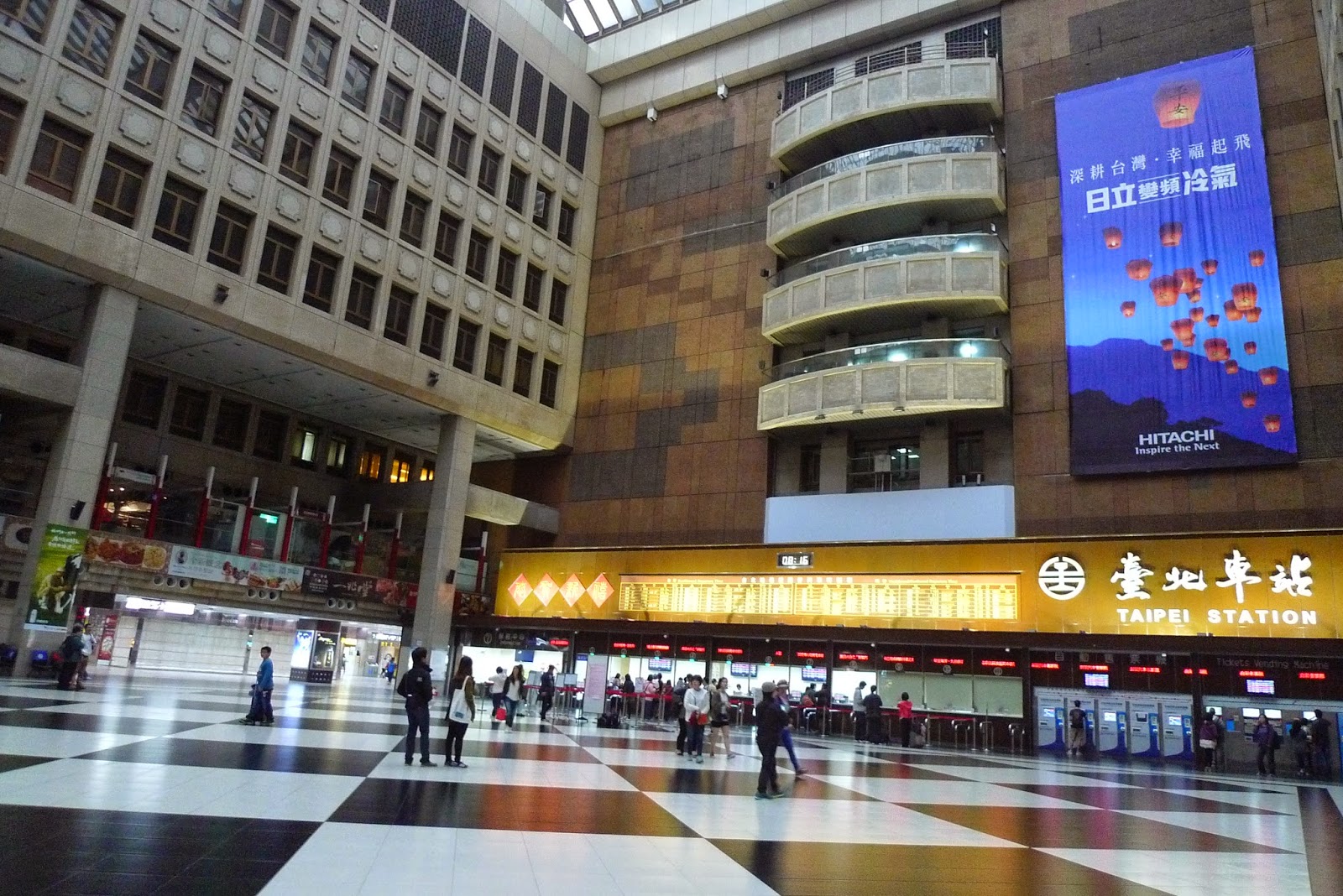 
We board the Pingxi train at Badu station and it's almost full when it departed. When the train reached Ruifang, not all the passengers at the platform are able to squeeze into the train. 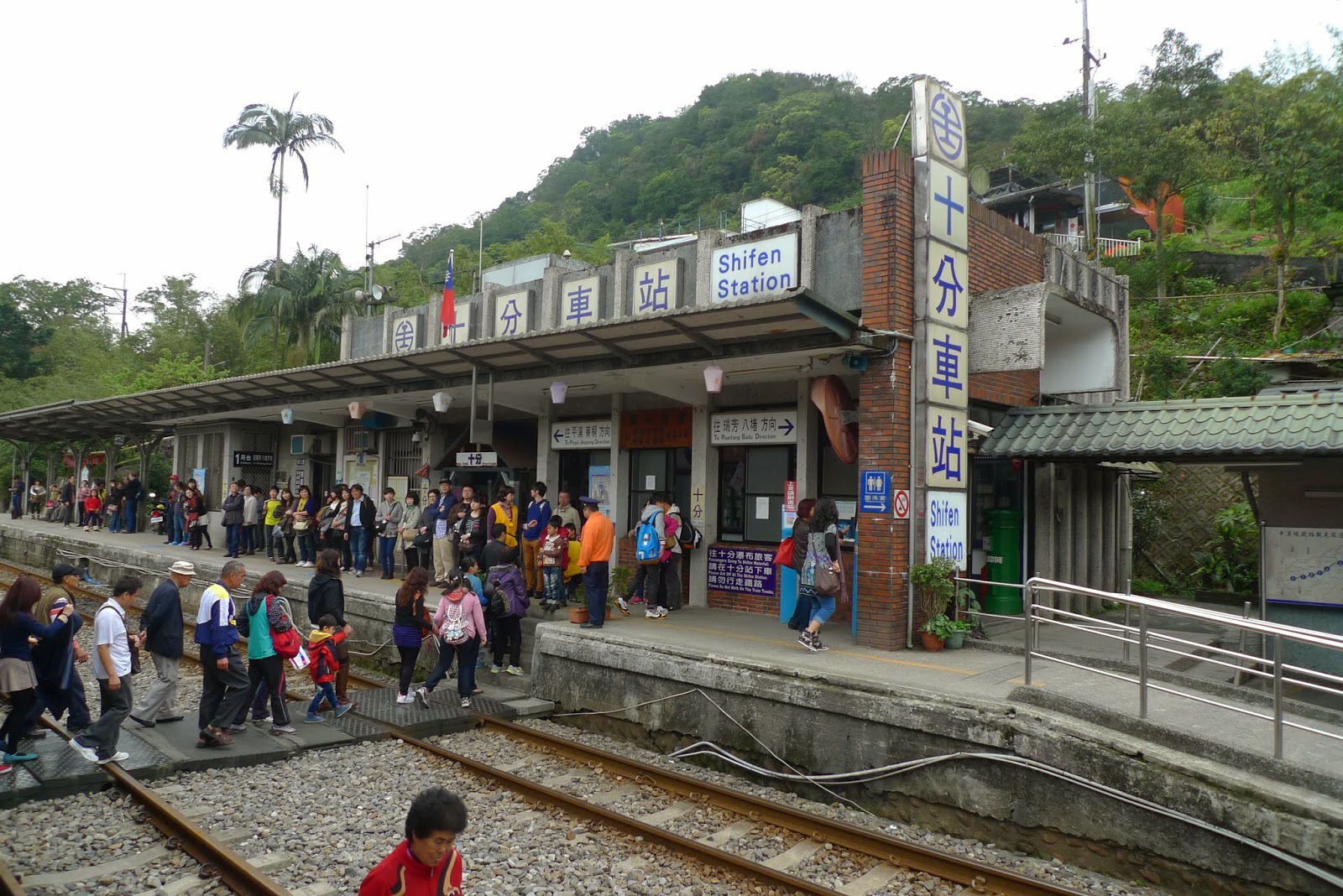 
Jingan Suspension Bridge is located behind the train station which connects the village of Shifn and Nanshan. The suspension bridge was originally used for transporting coal and later, the government renovated it to become a pedestrian bridge. 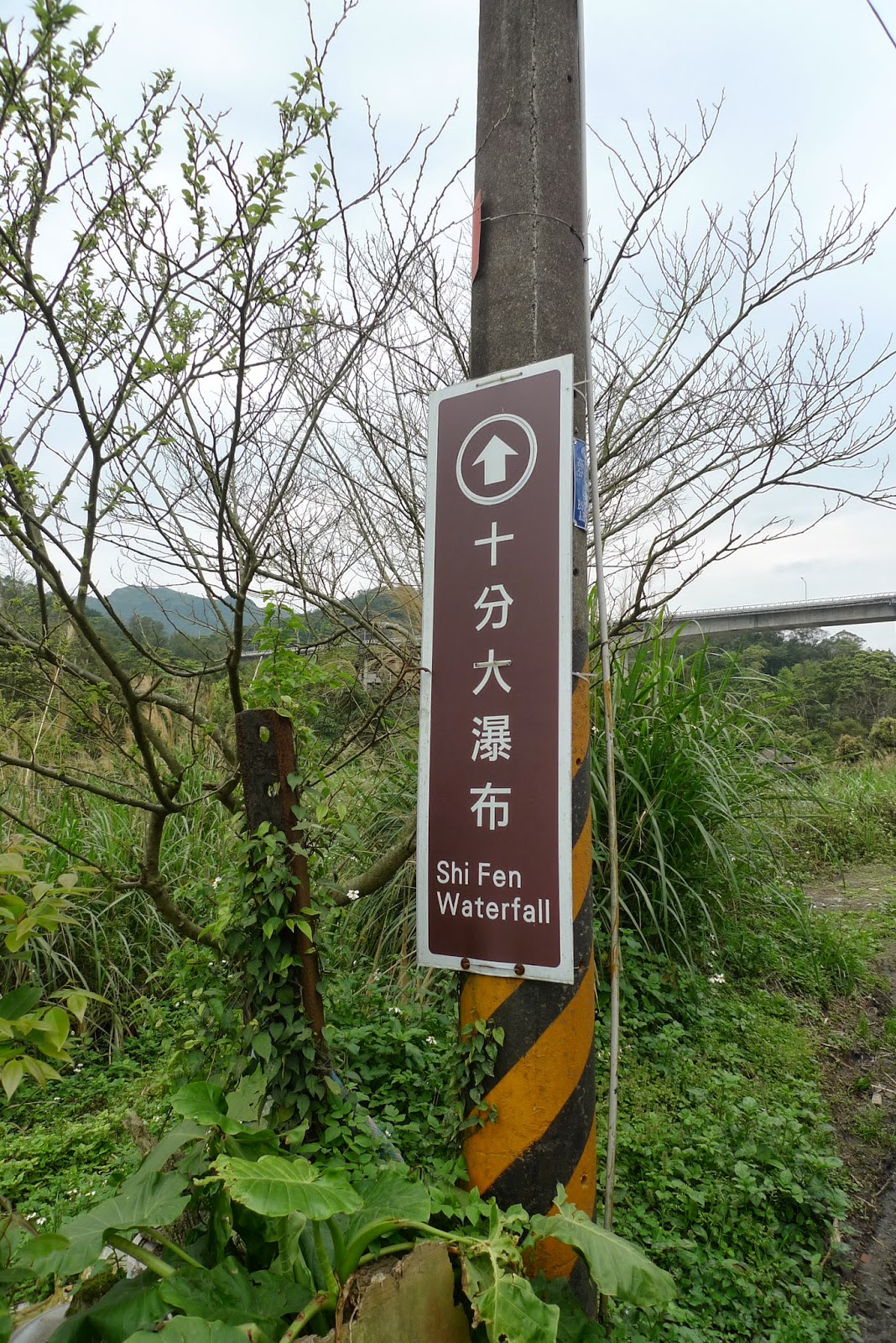 Midway to the waterfall, there is a visitor centre which has restrooms and drinks vending machines.

Pink flowers along the roadside 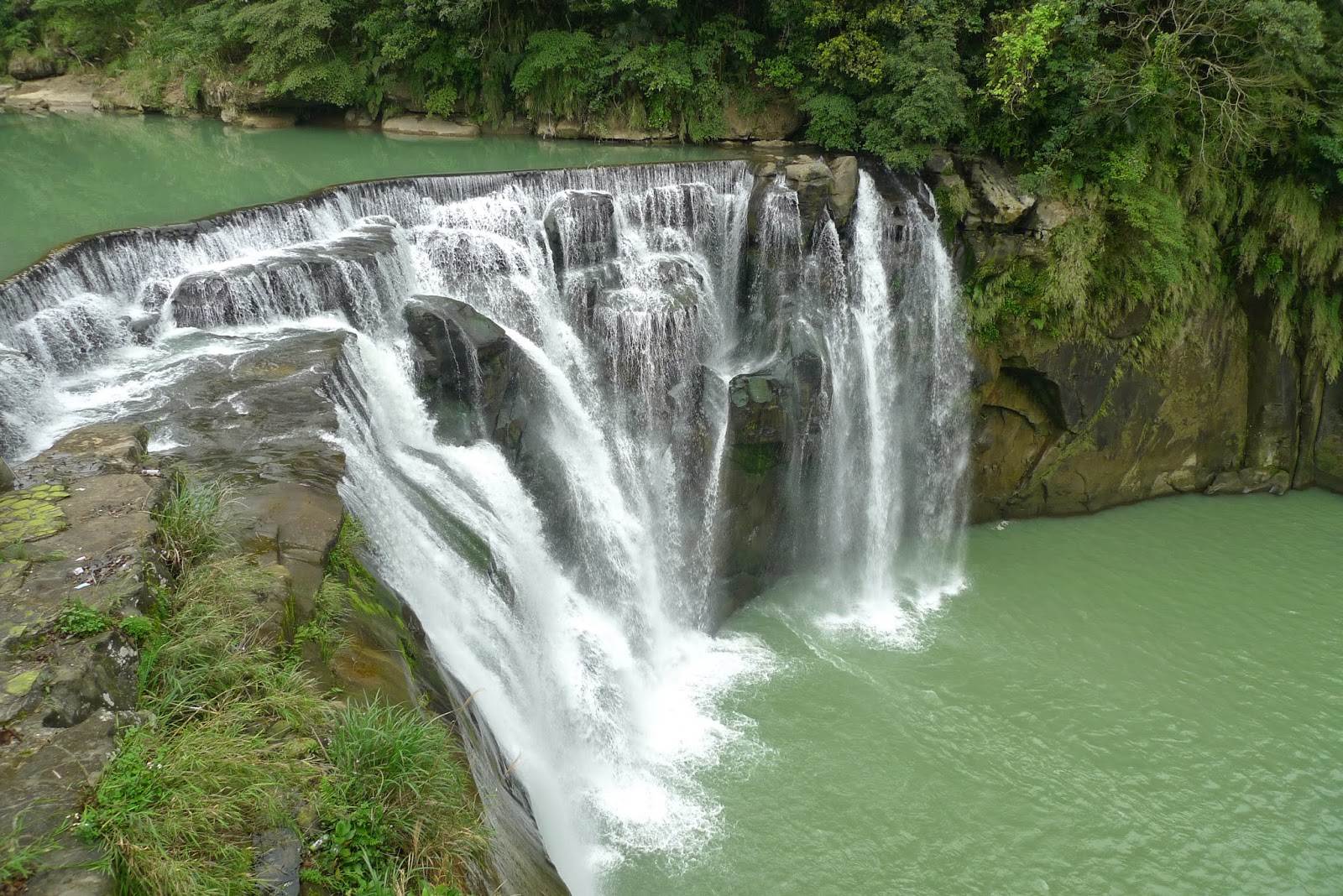 The admission ticket includes a cafe discount voucher which we used it to buy a cup of cuppa at Shifen waterfall. 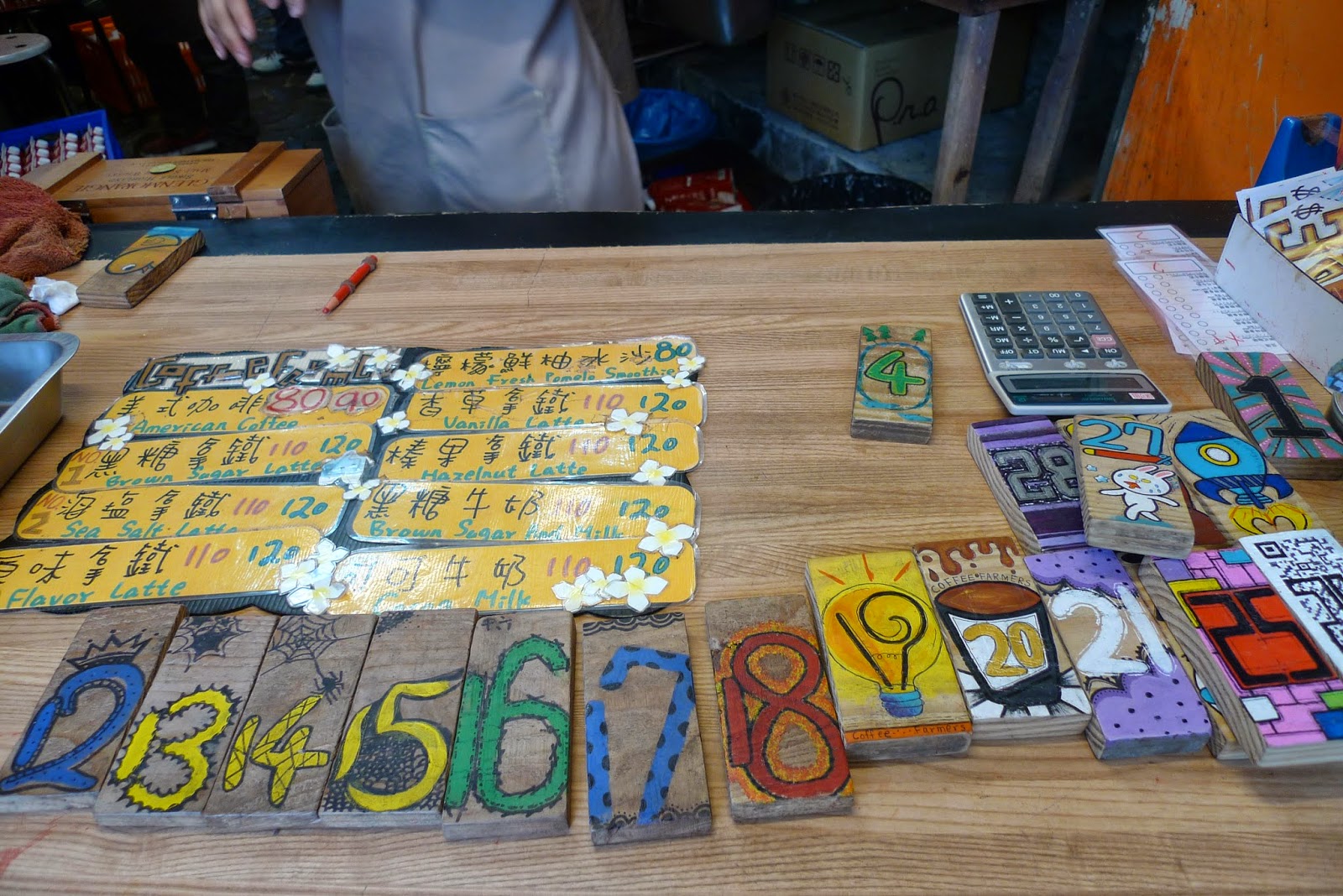 Having a cup of cuppa

We took a different route back to Shifen station where we walked along the railway track to Guan Pu suspension bridge. As the train frequency is about an hour interval, it's relatively safe to walk on the railway track. 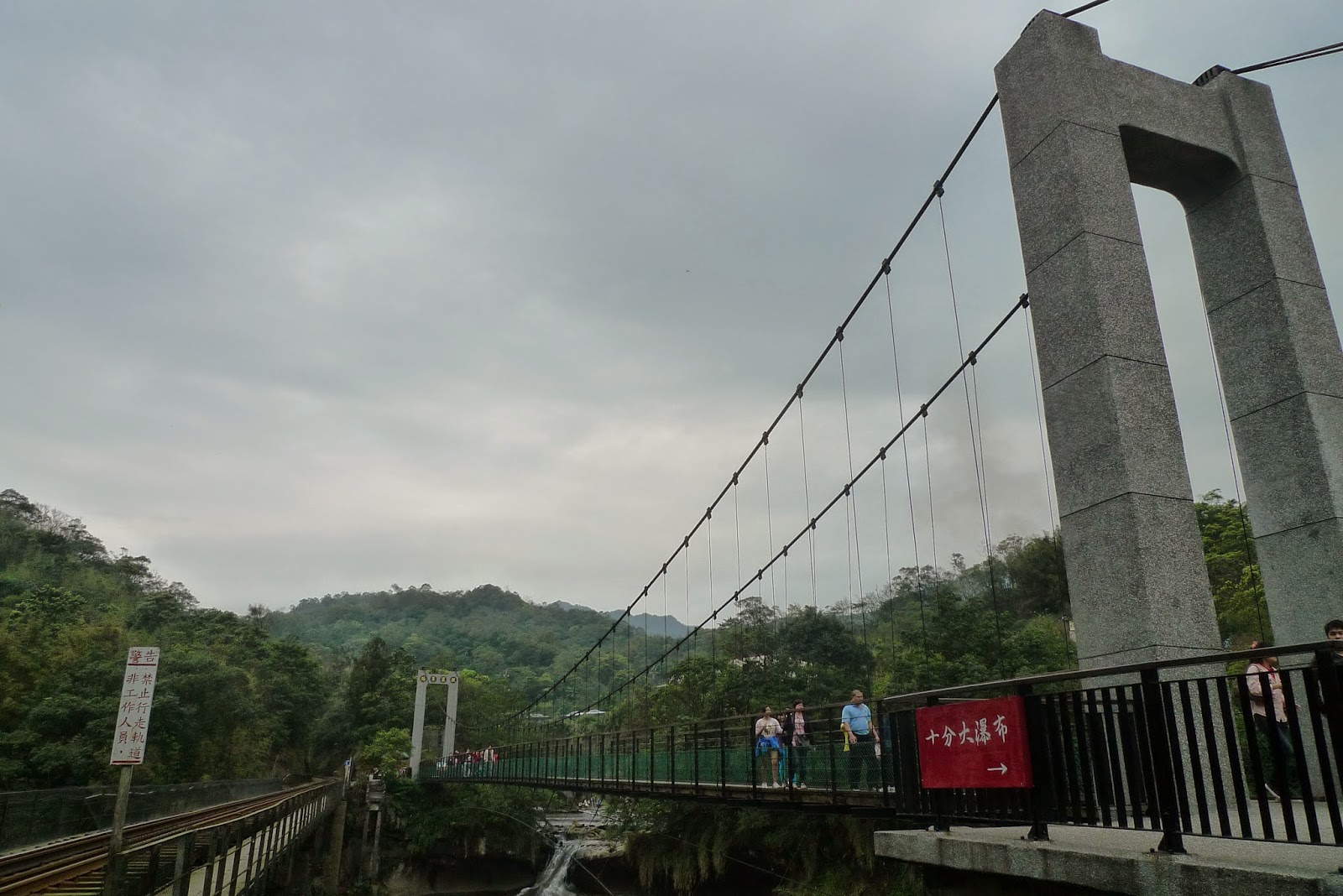 
After a long period of erosion, two unusual caves were formed in the rocks surrounding the waterfall. With water cascading down between these caves, the waterfall looks like a pair of glasses from afar, hence its name.

There is a nougat stall which sells a variety of flavors and we bought almost every flavor which range from rose, osmanthus, rosella, strawberry, chocolate, black sesame, peanut, almond, to green tea, mango, coffee, pumpkin etc.

There are many food stalls and we bought finger food such as BBQ wild boar meat and ngoh hiang to cure our hunger pang. 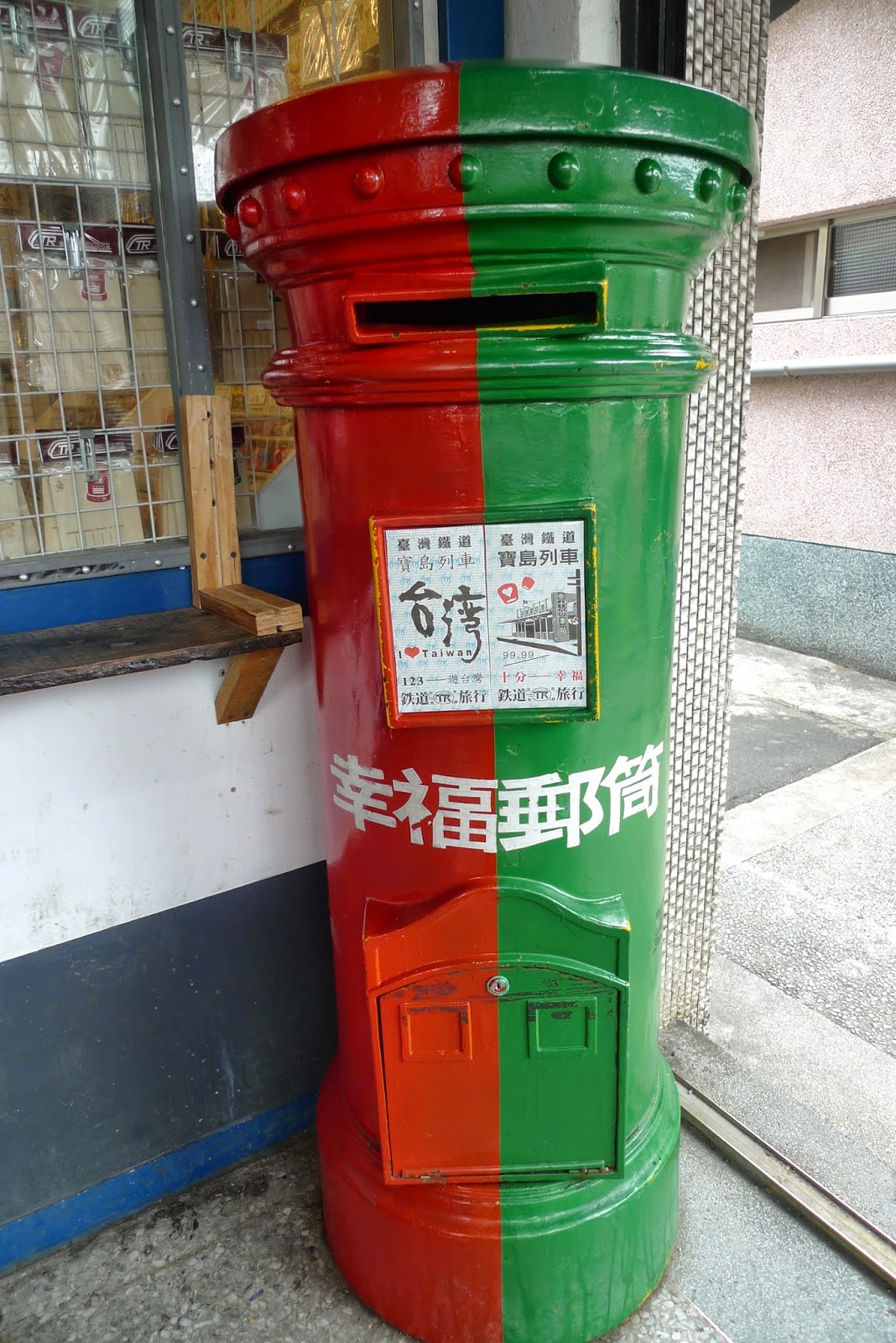 We waited for the next train to Jingtong station but the train was delayed for almost an hour so when the train finally arrived, we have to squeeze our way into the train.

Sitting at the platform and waiting for the train

I'm surprised to find osmanthus ice cream at Jingtong station as it is not a common ice cream flavour. The ice cream taste like normal vanilla ice cream with a fade osmanthus flavour.

Visited by famous actors and actresses

There is a famous shop in Jingtong selling chicken roll. In fact there is no chicken meat and the roll is in fact made of ingredient which includes yam, onion, beancurd skin and flour. In the past, the families are too poor to afford meat hence they use the beancurd skin to roll the leftover vegetables and deep fried. The Yang family chicken roll tasted like ngoh hiang albeit slightly harder.

Jingtong station was built by the Japanese in the 1930s and is one of Taiwan's four remaining wooded railway station. It is ranked as one of the Top 100 Historic Century-old Buildings in Taiwan. 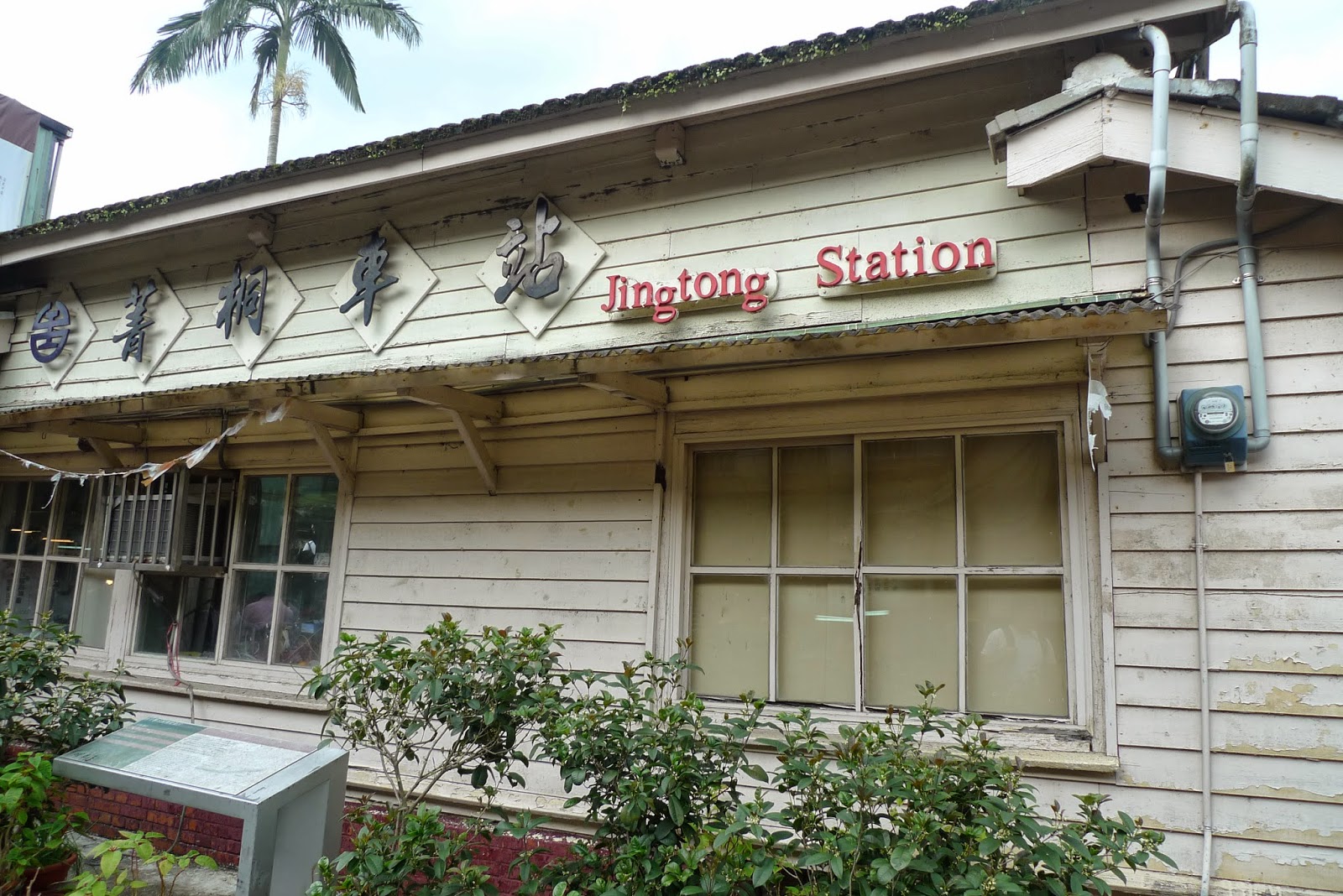 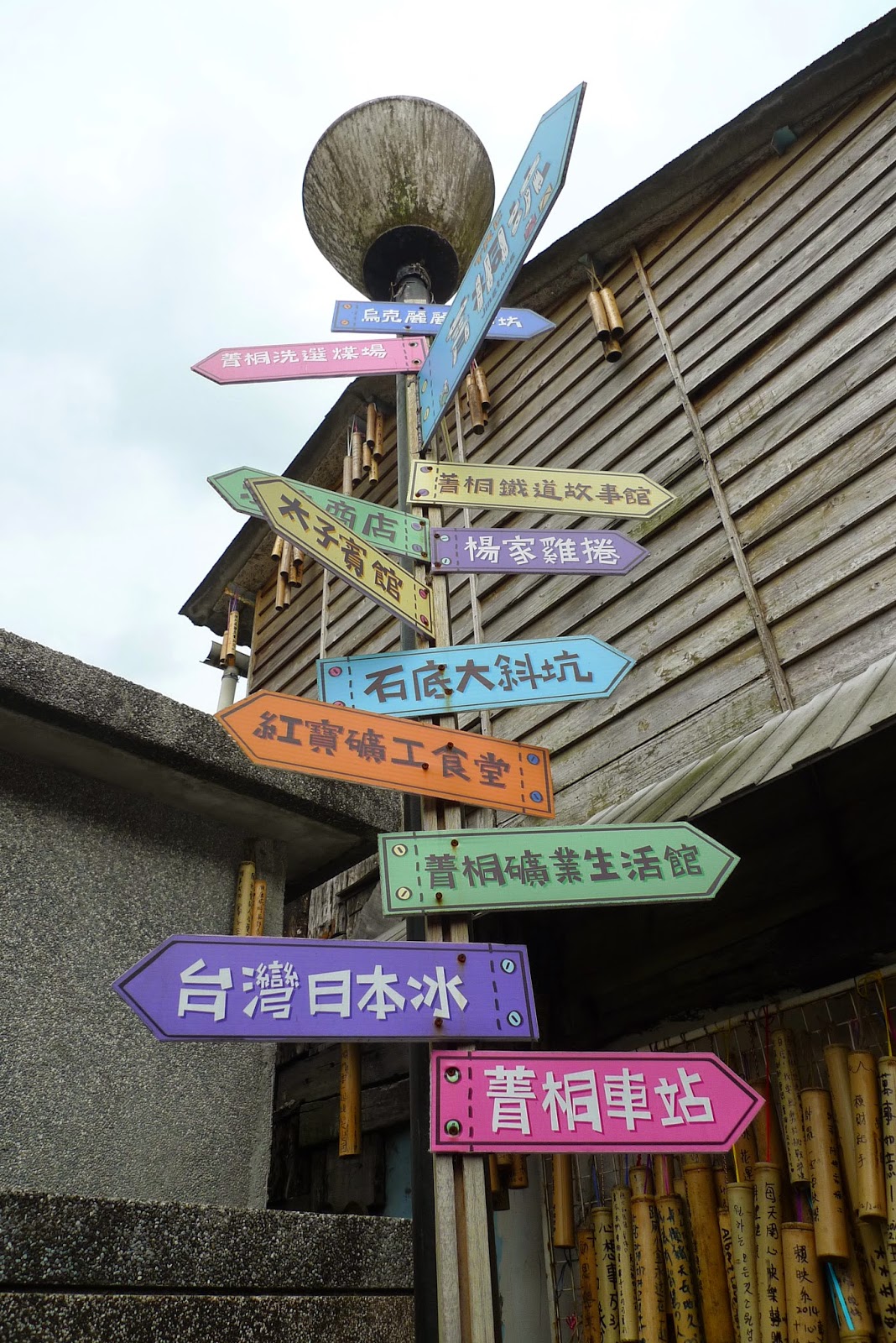 We bought a bamboo roll for NT40 ~ S$1 and wrote our wishes on it before hanging at the railway station.

Opposite Jingtong station is Jingtong Coal Memorial Park, a former underground mining site. The below photo is a scene depicted in the movie "You are the apple of my eye" where the lead actor and actress dated during their college days.

We then took the train to Pingxi station. Although this station is not as famous as Jingtong station but the lanterns and the bamboo rolls hanging at the station gives it a vintage and nostalgic feel.

We saw many people releasing sky lantern here. I purposely planned Pingxi to be our last station as I wanted to release the sky lantern here. Pingxi is the only place in Taiwan where sky lanterns can be released legally, as it has been deemed a safe location due to its location high in the mountains, its significant annual rainfall, and high humidity level. However, it has since spread to other stations along the Pingxi line.

The sky lantern originated in the 19th century when the villagers packed their belongings and retreated to the mountains to hide from the bandits. When Lantern Festival came, somebody would be sent back to the village to see if the bandits had gone. The scout then released a sky lantern so the villagers would know it was safe to return. 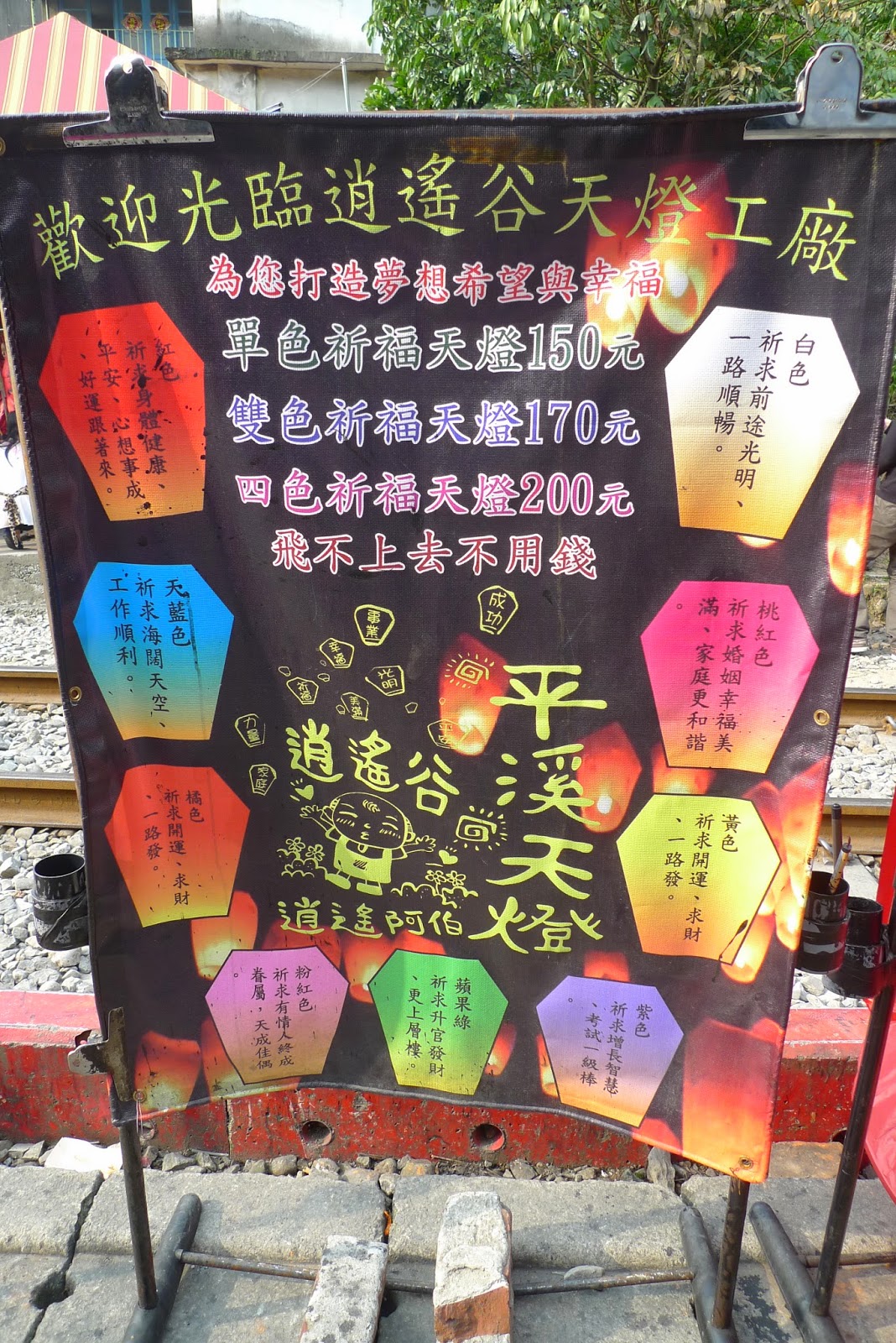 Explanation of the lantern colours

All the stations which we went today has an old street and Pingxi is no exception. The old street is the most happening place in the town and lined with many food stalls and cafes. 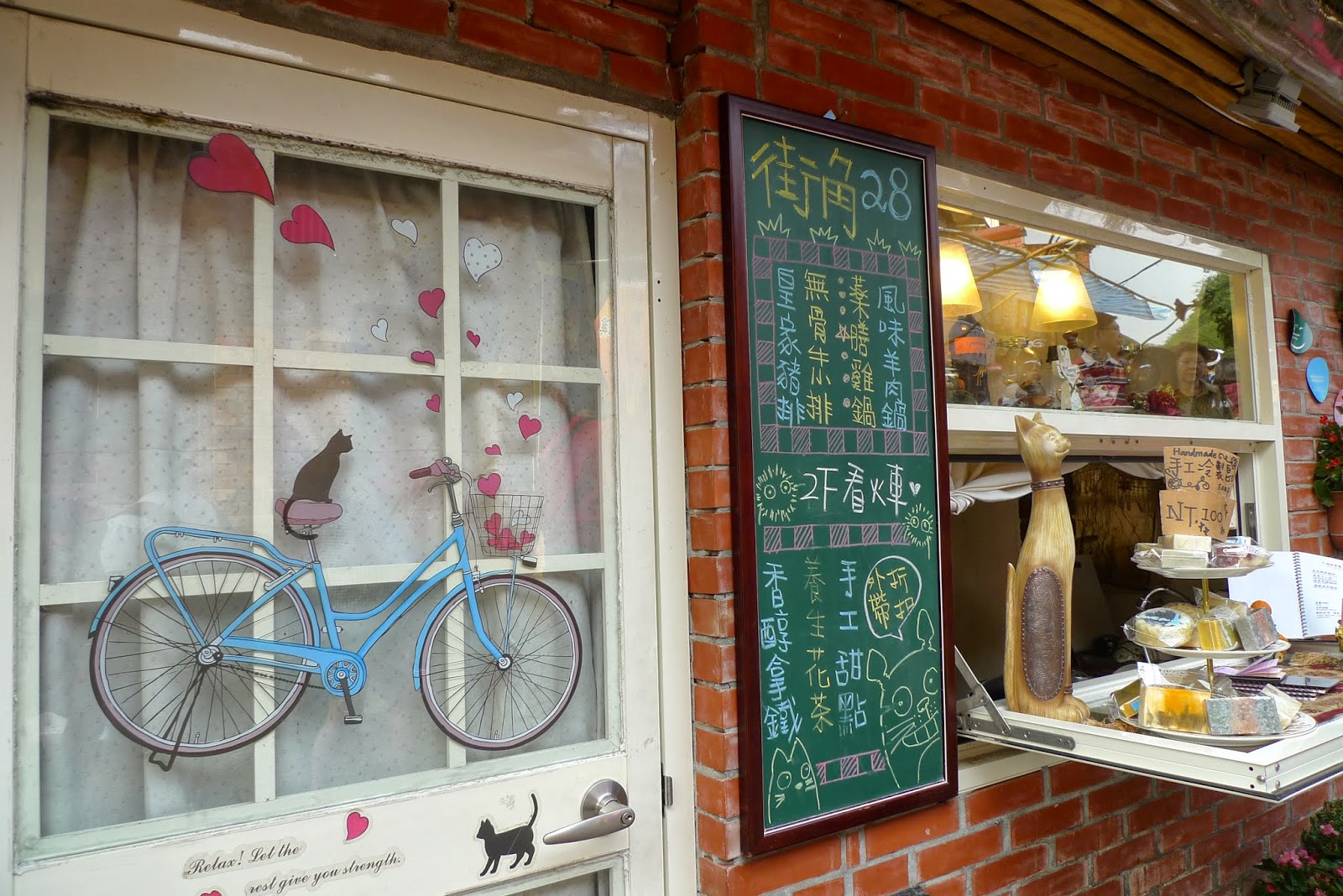 We tried the traditional flour tea (mian cha)  which is made by mixing water with flour made from husk or wheat. It taste like those black sesame paste/ peanut paste and goes well with you tiao.

This is another stall which I would recommend. It's a one man show where the boss will squeeze the fishball from the paste and customer have to scoop the fishball themselves and payment is self service. There are 2 fishball in a bowl which cost NT10 ~ $0.50. The fishball is freshly made and extremely chewy.

We bought the 4 colours sky lantern (NT200 ~ S$4) which is slightly more expensive than the plain colour sky lantern (NT150 ~ S$3). We wrote our wishes on the sky lantern with each colour represent different meaning. The shop assistants will be around to help the customer to release the sky lantern and take photographs for them.

Our turn to release sky lantern

Up up up it goes

We made the wise decision to board the train from Pingxi to Jingtong and then back to Ruifang otherwise I doubt we can squeeze into the train as it's packed to the brim.


By the time we reached Taipei, it's already 7pm. We then took metro to Taipower Building Station where the Shida night market is located. We didn't ate much but we tried the 盐水鸡 and 生煎包 which are popular food at Shida market. The clothes stalls here are more then the food stalls but we left empty handed. 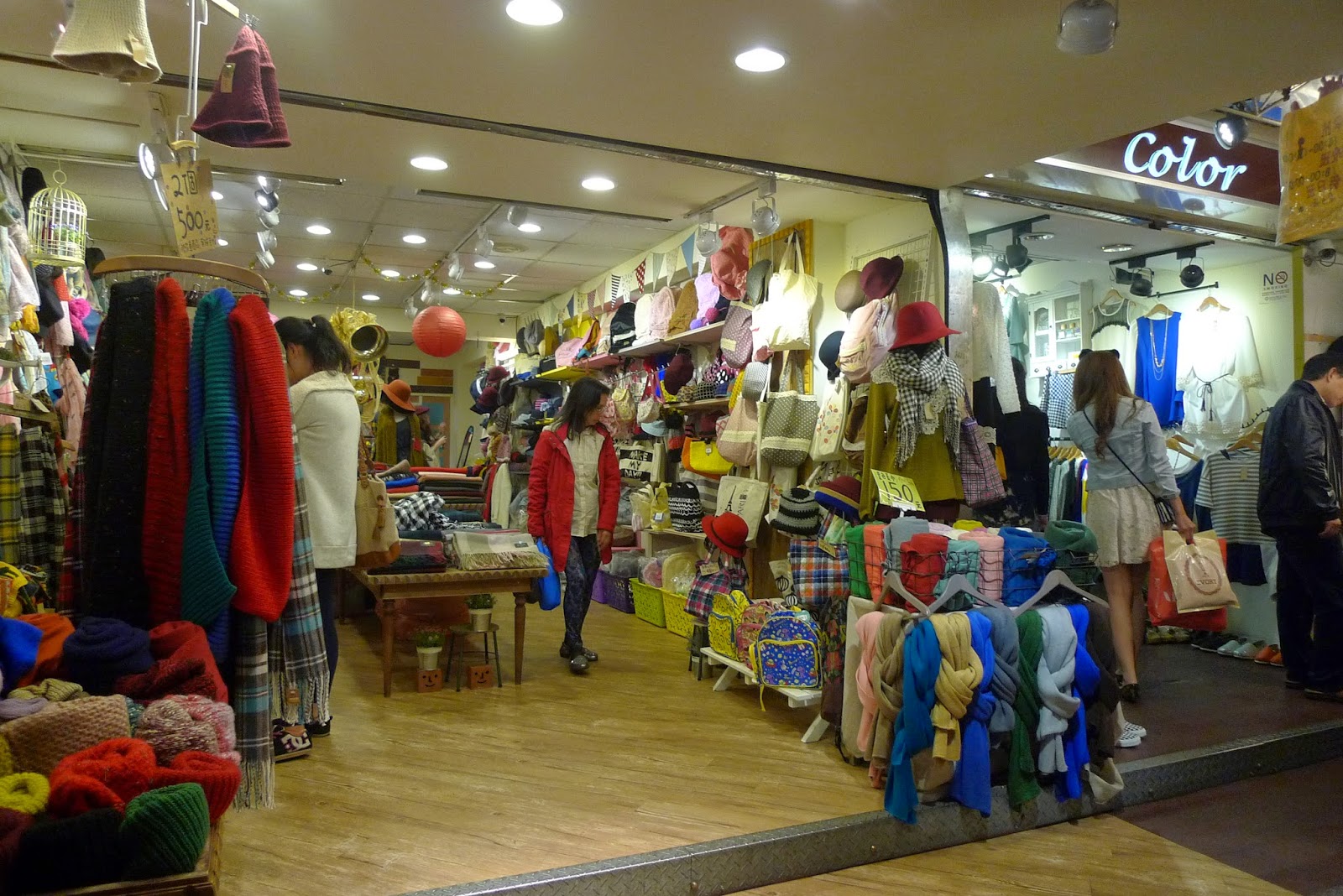