This time, my destination is Macau. When I told people that I'm going to Macau, their reaction is "Are u going there to gamble"? Well, Macau has much more to offer than gambling, there are lots to eat, lots to see and getting around is easy. Macau is also known as the crossroad for the meeting of East and West cultures.

Macau has an area of 28.2 sq. km compared to Singapore 682 sq. km which is relatively small. Macau comprised of the Macau Peninsula, Taipa, Coloane and the reclaimed area COTAI (which is formed from the combination of Taipa and Coloane). 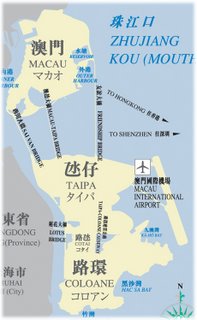 Why did i chose Macau? Initially, Macau was not my destination. I was planning to go Bangkok for shopping with my sis. However we changed our plan as we intend to bring our parents for a holiday. We feel that Hong Kong or Macau would be a more ideal destination if we are going with my parents, somemore Bangkok is not very safe due to the coup when we were planning our trip. Then we were planning to go Hong Kong but the airtickets became super expensive as we are going in peak period. Therefore we chosed Macau. In the end, my parents changed their mind so end up only my sis and I are going to Macau.

For those who watched Korean drama - Goong, you will notice that the last episode was filmed in Macau. Although I like this drama a lot but I'm going to Macau not because of this drama.

We bought Tiger airticket immediately when the airticket are released (typical Kiasu Singaporean - bought the ticket in Sep for Dec trip). I was afraid that the air ticket for peak season would be snap up very fast. For those who wanted to travel during public holidays and peak season, there would not be any airline promotions for this period, so don't wait for promotions, better grab it once the tickets are available for booking.

My departure ticket cost $39.98 and return ticket cost $49.98 but add up to $234.21 after adding taxes. When there is promotion, it only cost about $8.88 for one-way trip excluding tax. But too bad, I'm not travelling during the off-peak season, otherwise I can save on the airfare. Just went to the website and checked, if i were to book now, the airticket would cost me $249.98 & $299.98 for departure and return flight respectively excluding taxes which is $460 more. That's a lot of money.

The accommodation in Macau is not cheap. Well, I only managed to find one hostel in Macau - Augusters Lodge. However, we didn't booked the hostel as there was no en-suite bathroom. For me, a clean room is sufficient cos most of the time I will not be spending in the hotel room except for sleeping, so I do not find it necessary to book a 5 star hotel. Most of the cheap hotels are located at the red-light district area and we felt that it would not be very safe for 2 girls at night. In the end, we booked our 3 nights with Kingsway Hotel, a 3-star hotel which is located in the area where there are lots of better hotels. Although it's a 3-star hotel, but it's not cheap and cost $357 for 2 people w/o breakfast.

Macau’s official currency is Pataca (MOP$). Initially I was worried that I could not change Pataca in Singapore as I have not seen money changer selling Pataca. For general information, Pataca is linked to the Hong Kong dollar (HK$) which is accepted as currency in Macau, which is similar to using Brunei dollar in Singapore. The exchange rate for SGD to HKD is quite favourable now, the exchange rate on the day that i change to HKD was SGD1 to HKD 4.975. In the past, the exchange rate was about SGD 1 to HKD 4.5. So this translate into more money for spending.

Hi, Rainy_Girl
Thanks for your up-to-date information about travelling to Macau.

I am going to HK via Macau this weekend. It will be my first time to fly with Tiger Airways.

Hope u have a nice trip