My niece & nephew took a cab to my house and picked us before continuing the cab journey to the airport. We reach airport at around 6.30am as the flight to Jakarta is 8.10am. All of us were feeling so sleepy in the morning.

After checking in, we had breakfast at MacDonalds. Tiger airways has shifted to Terminal 2 as Budget Terminal is closed and demolished to make way for Terminal 4. I'm surprised that we have to take the airport bus to board the plane. I wondered why are the areobridges available for other Tiger Airways planes. 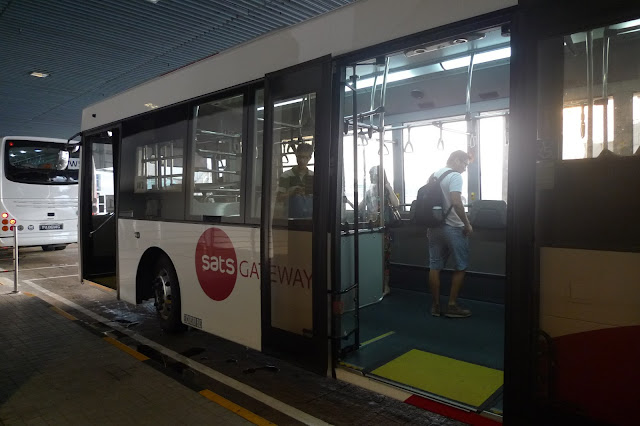 Airport bus to the plane


After the stewardess has distributed the immigration card, she distributed a packet of peanut to every passenger. 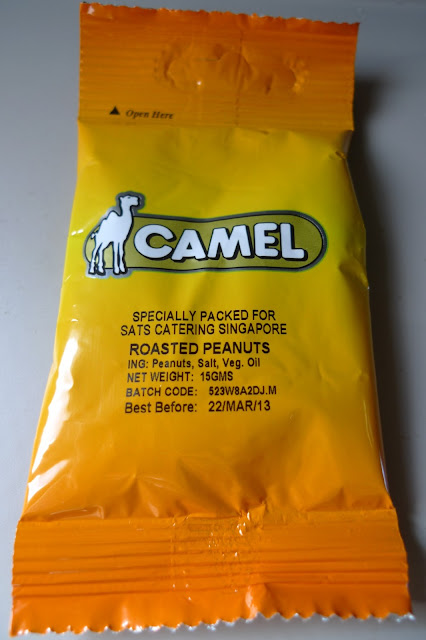 
After 1.5hr, the plane landed at Soekarno-Hatta International Airport. As Jakarta is GMT+7, we have one hour more in Jakarta. There are aerobridges at the airport hence we are shaded from the sun. 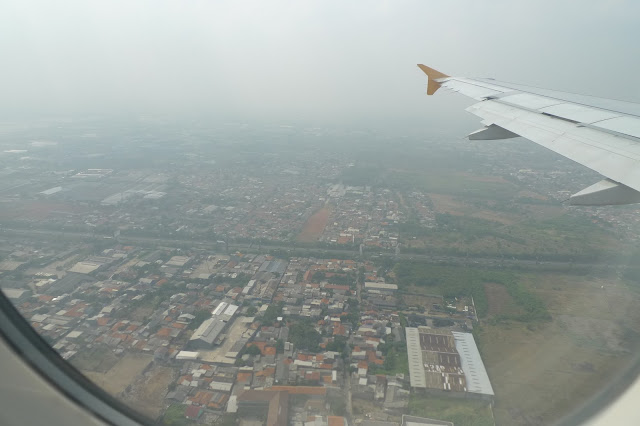 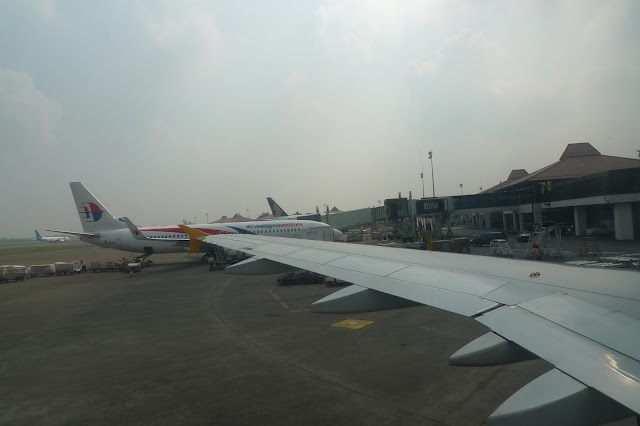 The immigration queue is not long as there are quite a lot of counters open. After exiting the arrival hall, I search for blue bird taxi counter and a guy came forward and approached us. Then he directed us to follow him and I sensed that something is wrong. I saw the counter and why should we be following him? Then it turn out that he is touting for passengers. We rejected him and queue up at Blue Bird taxi counter. Blue bird is the most reliable taxi in Jakarta so we always took Blue Bird to get around. There is airport surcharge depending on the zone. The fare from the airport to the hotel including airport surcharge cost IDR98,000 ~ S$13. 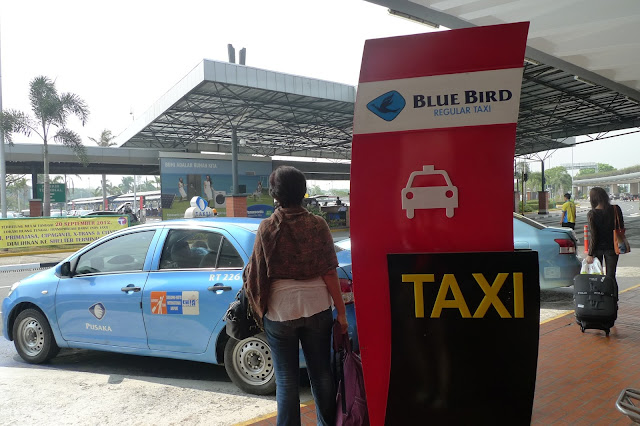 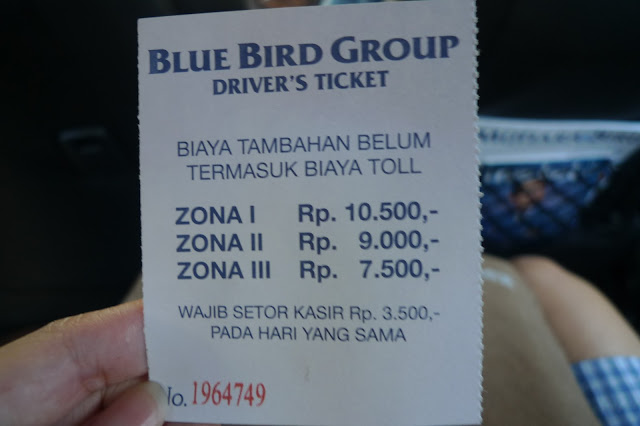 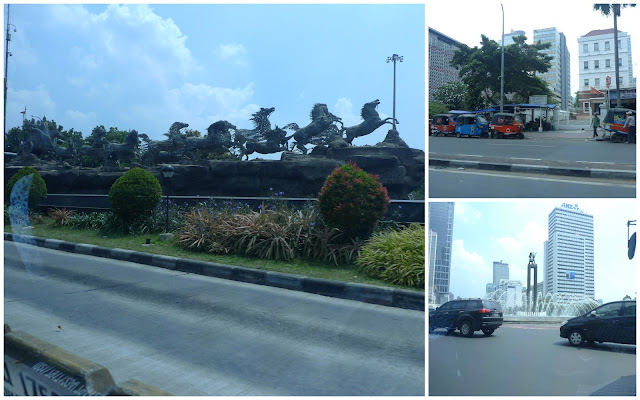 On the way to hotel

As it's not check in time yet, we left our bags in the lobby and went out. There is a taxi stand outside the hotel so it's very convenient. The standard taxi rate for Blue Bird is IDR6,000 flag-fall and IDR3,000/km after the first 2 km. It cost us less than S$5 for every trip around Jakarta. 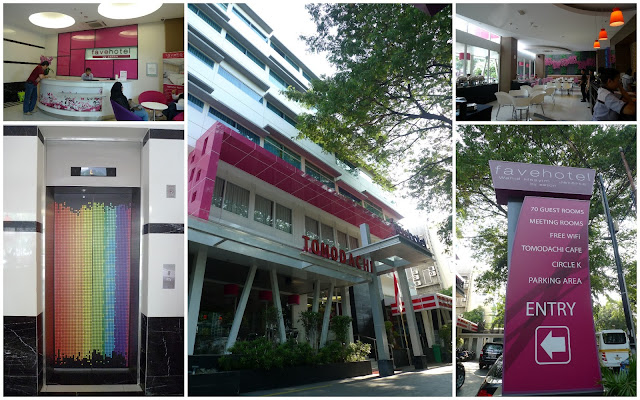 Since it already 11plus, we head for lunch first. Pondok Laguana is not yet open when we reached hence we waited outside for almost 15min till it open at 12pm. We ordered Tahu udang (deep friend tofu with seafood and vegetable filling), Fried & Grilled Gurame, satay and Es kopyor (iced young coconut drink). The tahu udang and fried gurame are delicious but the grilled gurame is too sweet to our liking. 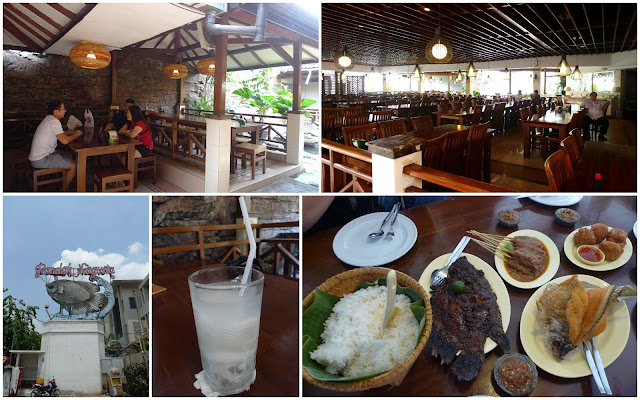 After lunch, we took a cab to Istiqal Mosque. Istiqal mosque is the largest mosque in the South East Asia. This national mosque of Indonesia was built to commemorate Indonesian independence, and named "Istiqlal", an Arabic word for "independence. 3 of us have to wear a robe before entering the mosque as we are wearing shorts. Then we have to wash our feet. A staff from the mosque guided us and at the end of the tour, he requested for a tip. I felt that this guide shouldn't be asking for tips but nevertheless I gave him IDR30,000 ~ S$4. 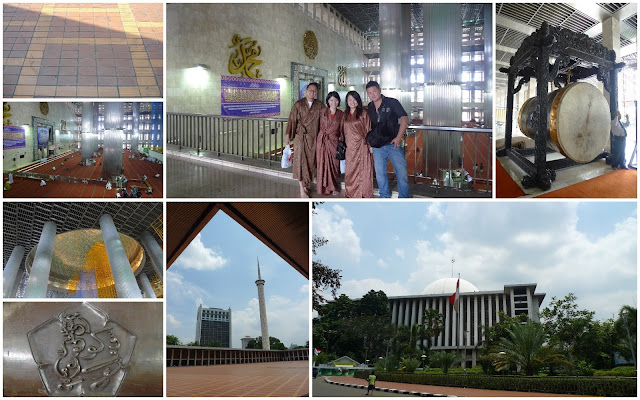 We crossed the road to Jakarta Cathedral which is just directly opposite Istiqal mosque. When we entered the cathedral, there is a newlywed couple taking photographs at the altar. We rested for a while inside the cathedral as it was so hot outside. 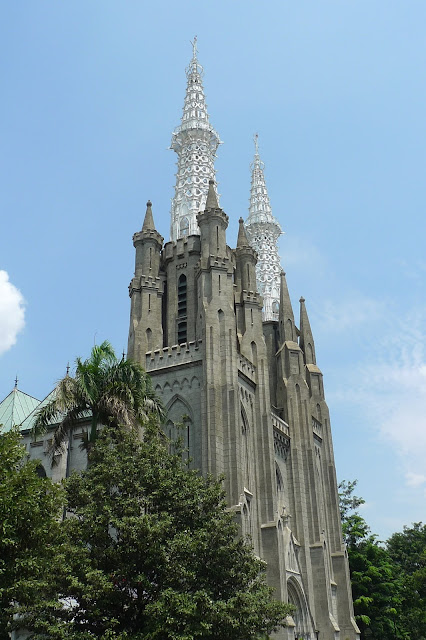 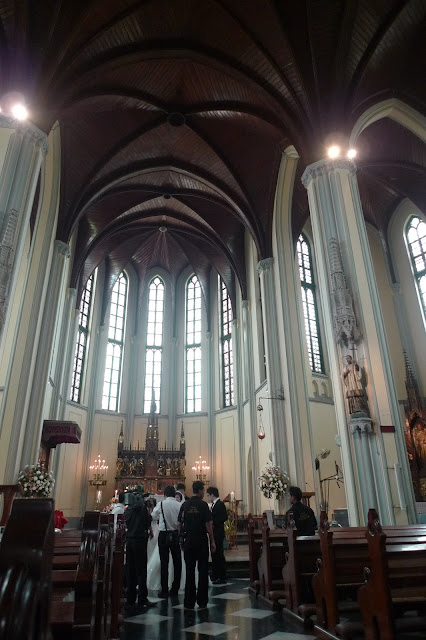 We are not allowed to bring our bags into the museum, my niece and nephew help us to safeguard our belongings. There are no lockers for depositing the bags hence they didnt went in with us. The museum displayed the history of Bank Indonesia and Indonesia's economy in general. It worth spending at least 1/2hr in the museum as there is English explanation on the exhibits. 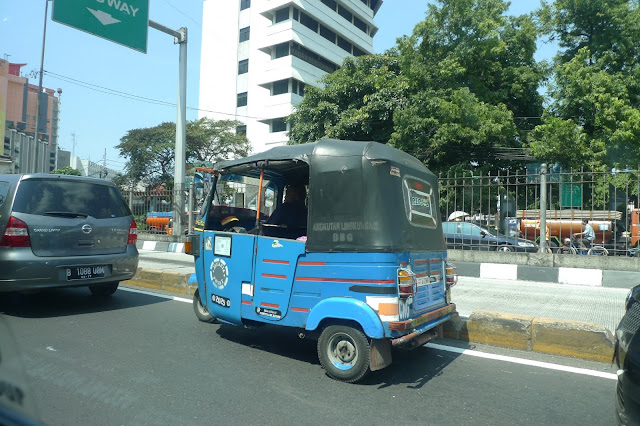 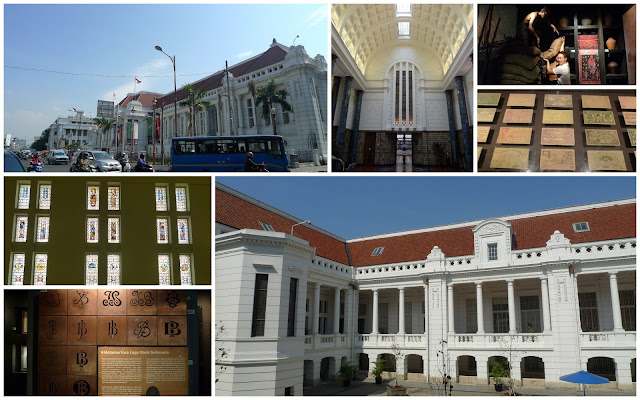 Museum Bank Indonesia is located at Kota Tua area hence we walked around for a while. It was scorching hot so we went back to the hotel shortly. 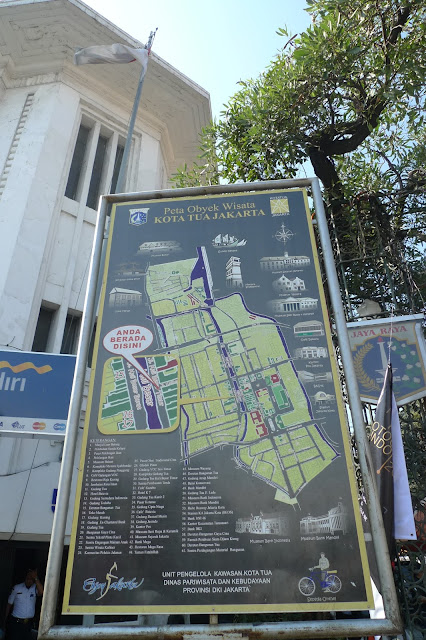 There is spa beside Fave Hotel Wahid Hasyim and we went in to check the price. The massage is not cheap and cost at least S$50 an hour so we return to the hotel. 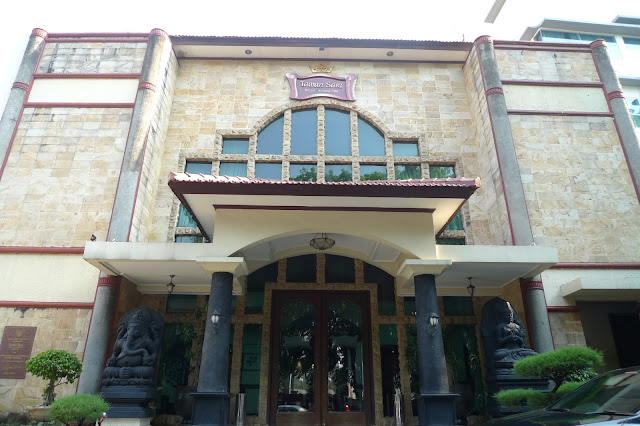 All of us are tired as we woke up so early in the morning. We went back to our room and took a nap. 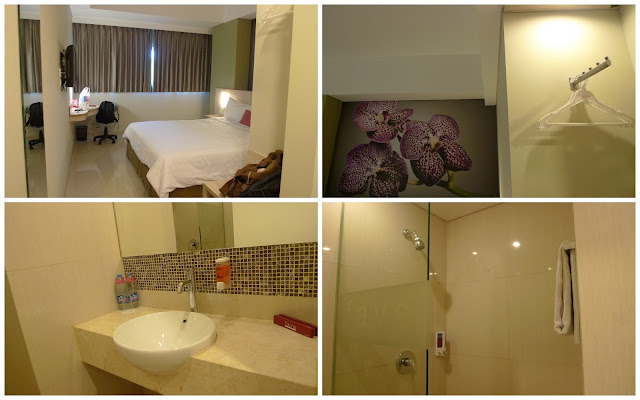 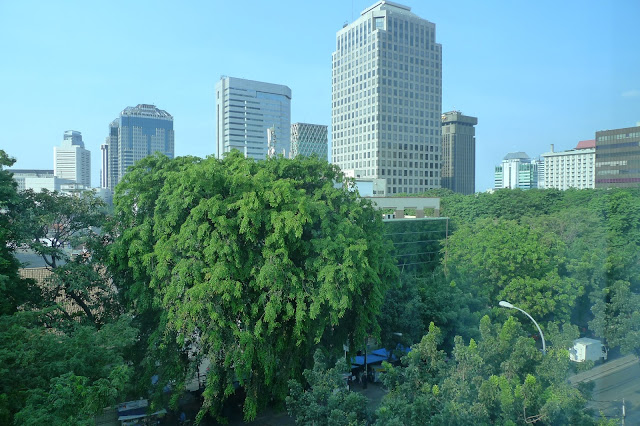 View from the room

We woke up at dinner time and took a cab to Oasis restaurant. Add: Jalan Raden Saleh 47, Jakarta Pusat.

This restaurant is very posh. Once we stepped into the restaurant, someone will rings the gong and the door will "magically" open leading to the dining area. There is also live band singing and performing. The band will even visit table by table and sing a song for the guests. 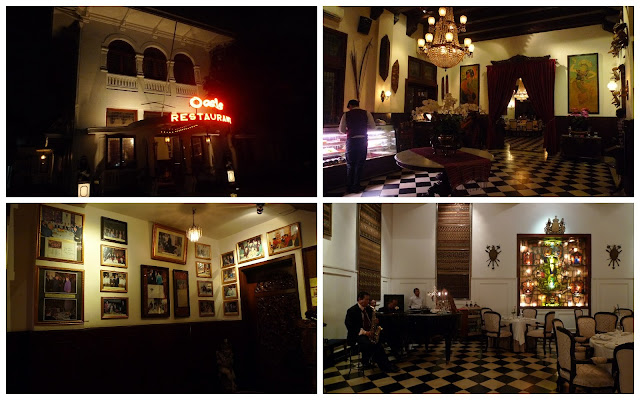 As no forumers wrote the pricing of the food in Oasis, I have no idea how much is it. I choose  to eat Oasis as Rijstaffel is served here but the pricing of S$50 turn me off. I ate Rijstaffel in Yogyakarta and it only cost S$15. In the end, we ordered western set meal which cost S$35. I don't find it worth spending so much but that is the cheapest meal which we can find in the menu. 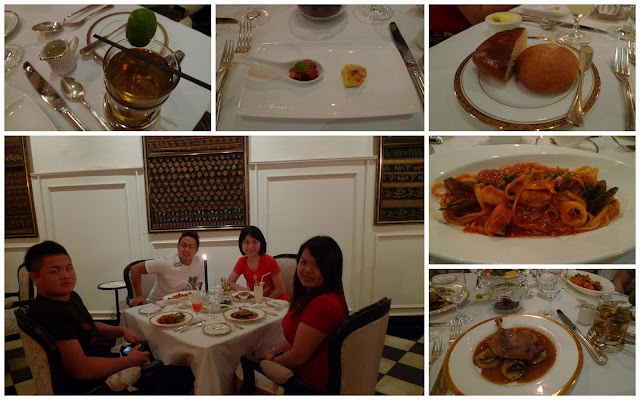