We woke up early today for the alms giving at 7am. I was disappointed when I saw only 2 monks coming as I thought it's a depict of the alms giving in Luang Prabang. Nevertheless we gave the set which Noot has helped us to prepare to the monks and get chanted by the monks to wash away our bad deeds. It's really an unique start on my Birthday. 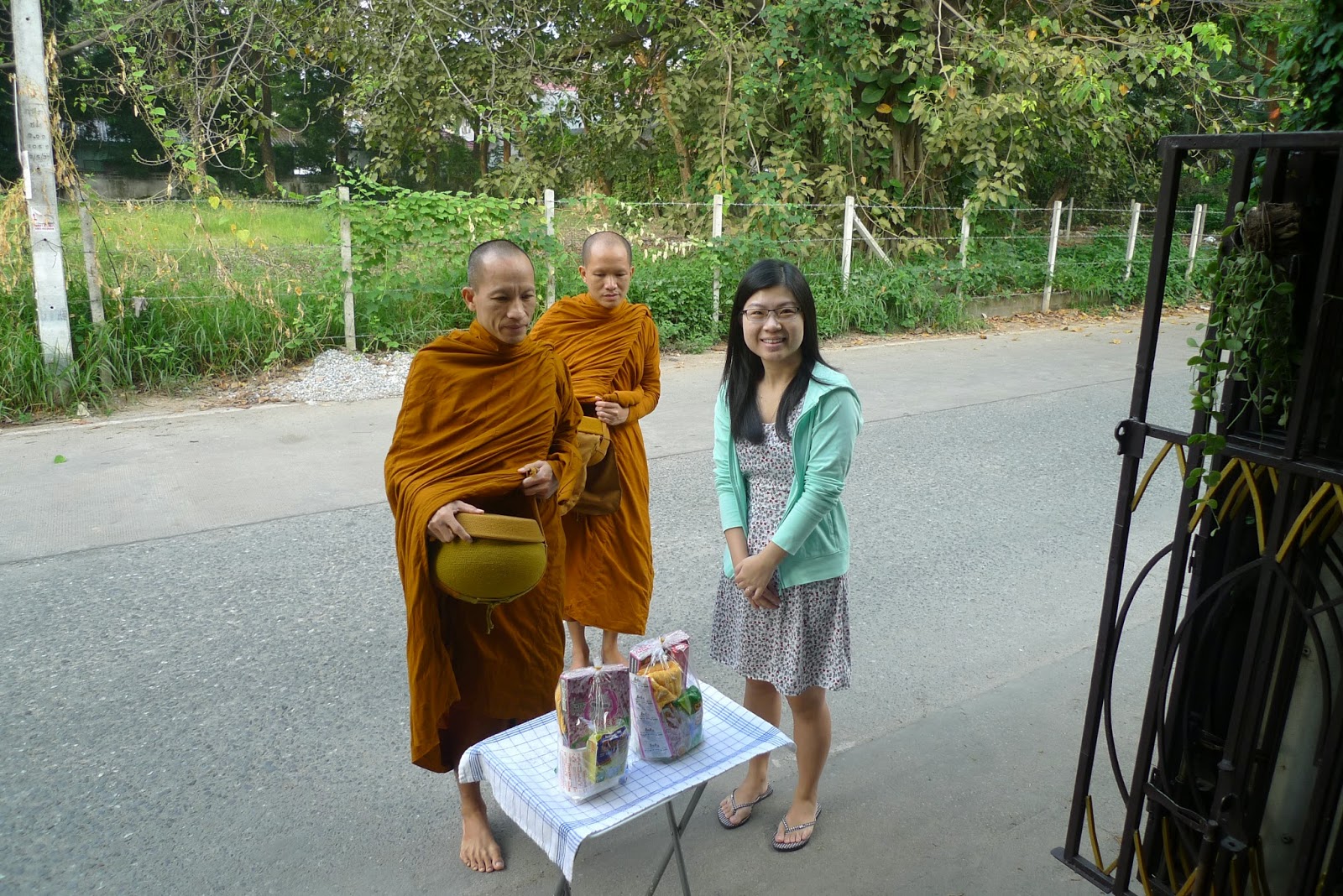 We then had Western breakfast which we has chosen yesterday. The chef has sprinkled cheese flakes on the omelette or scrambled egg and it taste good! After breakfast, Noot gave us the list which we then chose what we want for tomorrow breakfast. 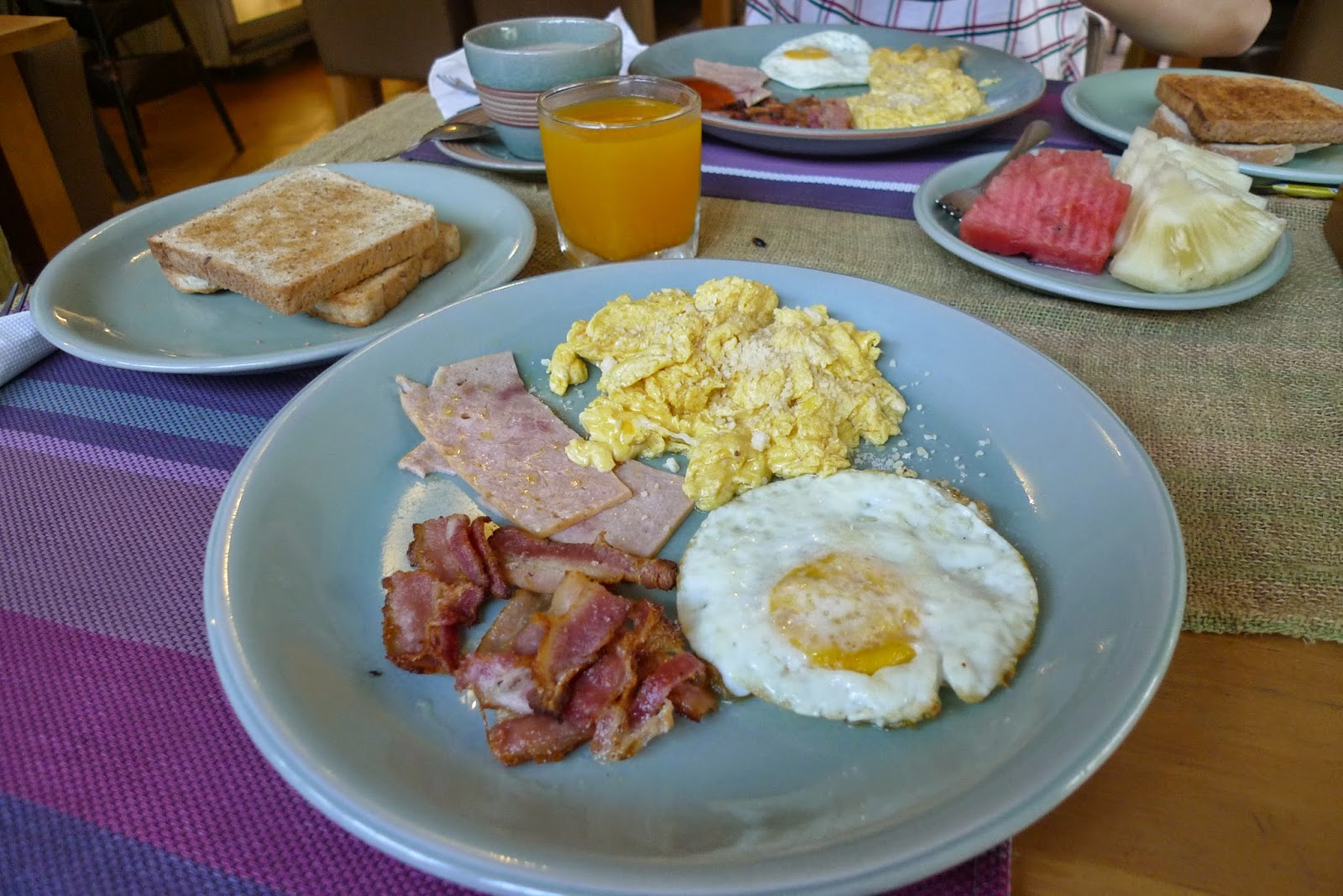 We walked from the guestouse to Wat Lok Molee which is 10min walk away but we felt like walking for 20min under the hot sun. The temple is serene and peaceful as it is located outside the old city wall and away from the tourist path. There is a large chedi at the back of the temple but climbing up the chedi is prohibited. 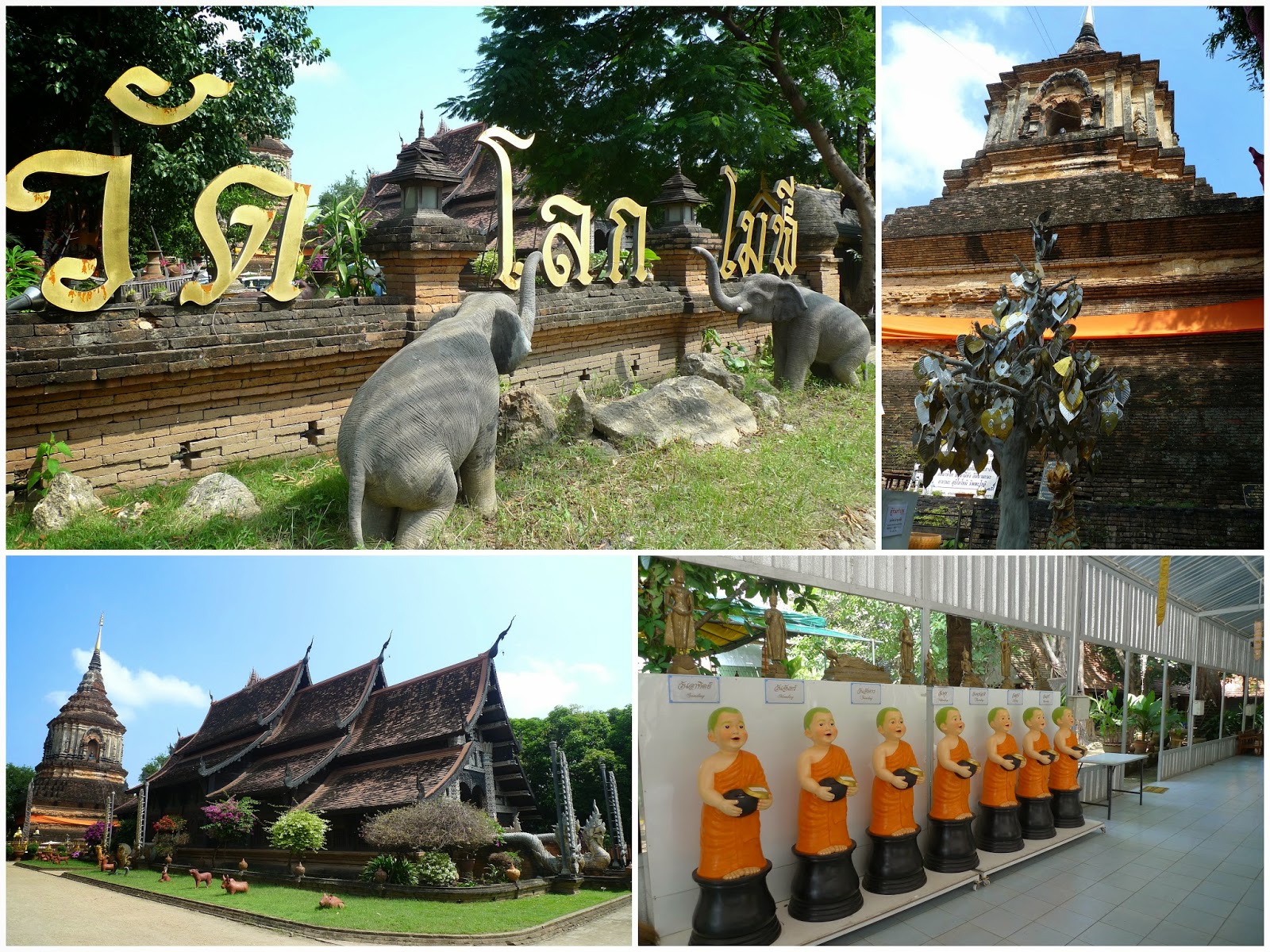 We then took a songthaew to Wat Si Suphan. It only cost us THB20 each which is less than S$1 and from then on, we try to take songthaew wherever possible as it's much cheaper than taking tuk tuk. Most of the songthaew we seen in Chiang Mai is red in colour which ply around the city but there are other colours too: Green (To San Sai & Mae Rim), Yellow (To Sanpatong), White (To Mae Taeng & San Kum Pang) and Blue (To Lamphun). 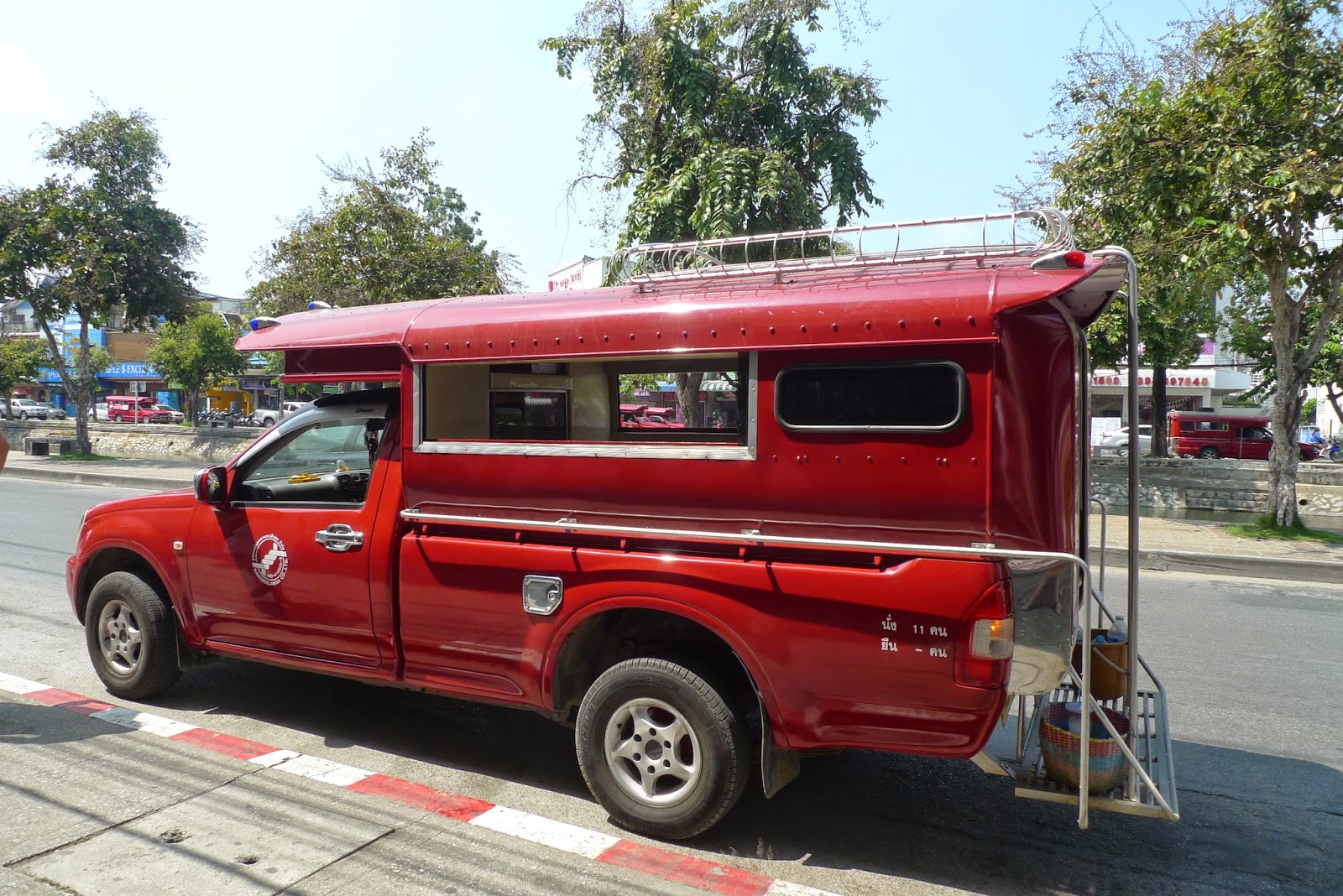 Wat Si Suphan is located at Wualai Road and what is so special about this temple is that it's silver in colour. It's like a miniature of Chiang Rai Wat Rong Khun (White temple). Women are forbidden to enter the ordination hall. 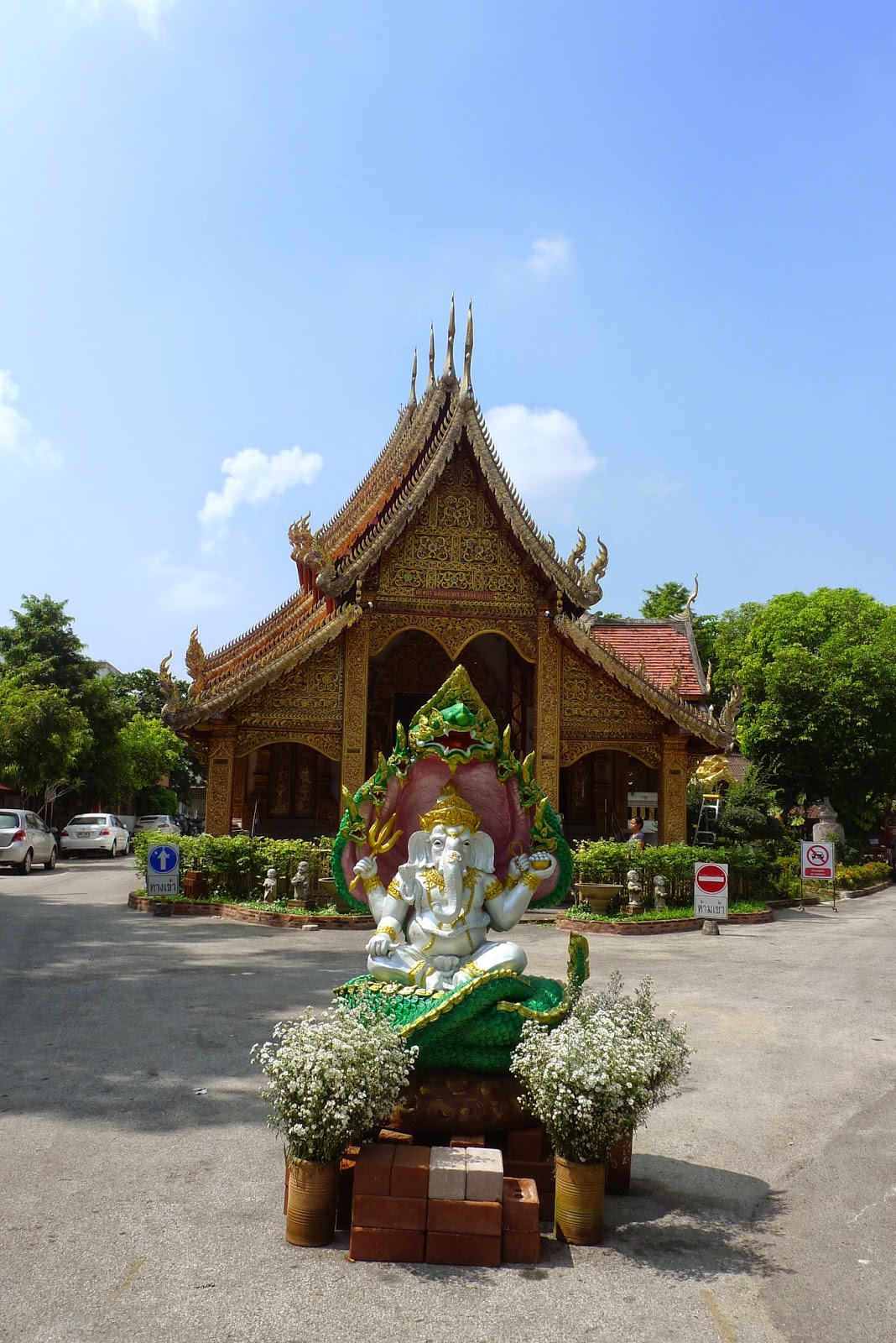 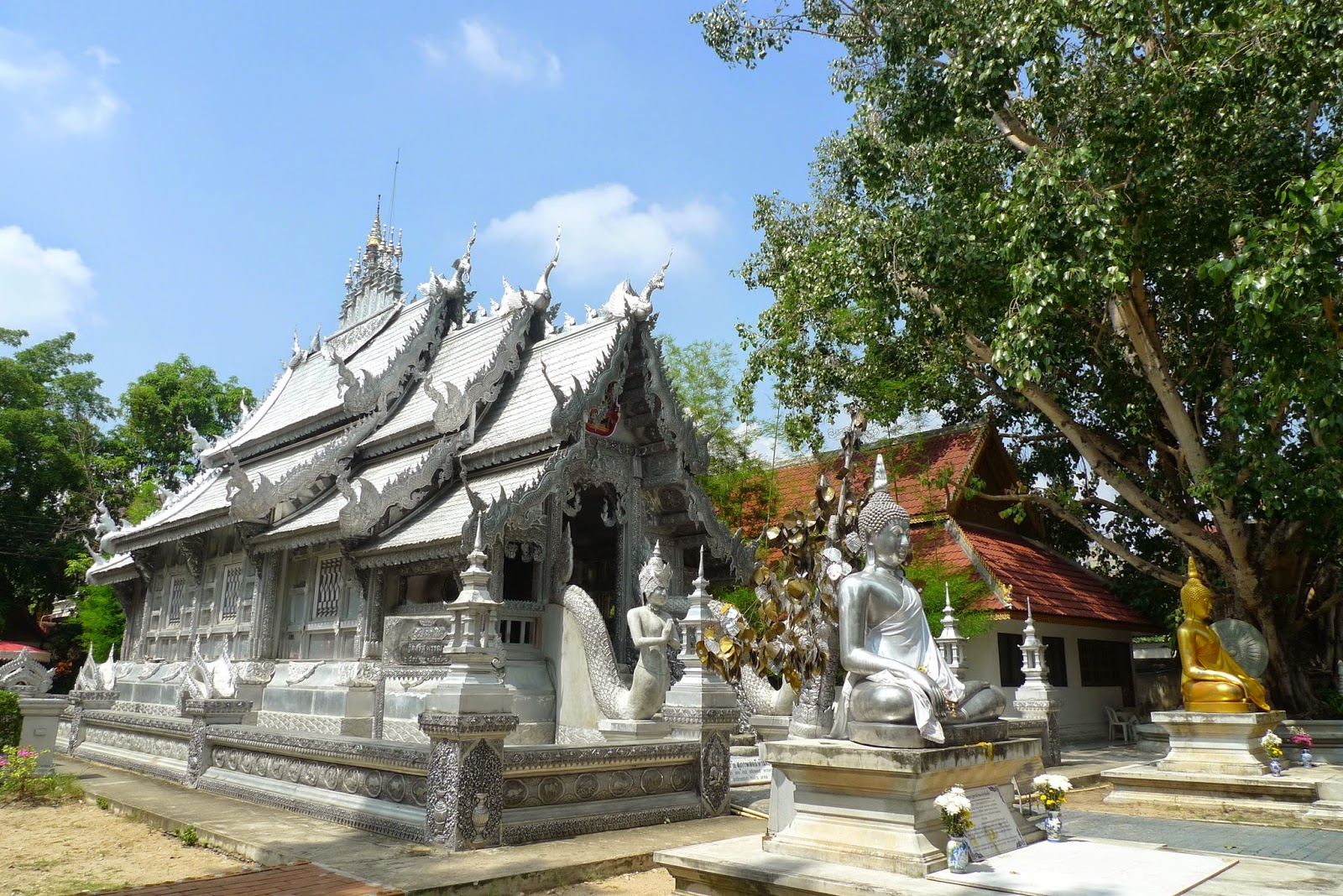 The songthaew driver which drove us from Wat Lok Molee to Wat Si Suphan was waiting for us as he rather wait for us for 15min here than to search for new customers. Songthaew business is very competitive as we often see many songthaew plying along the same road. We asked the driver to drop us at Aroon Rai restaurant but it is open for business at 4pm so we took another songthaew to SP Chicken for lunch.

SP Chicken (Add: 9/1 Sam Lan Soi 1 (the small road beside Wat Phra Singh), Opening hours: 11am - 9pm) is an Isaan restaurant famous for their gai yang (chicken). The restaurant was even featured in the New York Times. When we first sit down, we were given Chinese and Japanese menu but I requested for an English menu. The staff must have mistaken us as either from China or Japan.

We ordered half roasted chicken, grilled pork and spicy green papaya salad with salted crab and coke for THB220 ~ S$8. The roasted chicken is marvelously succulent with crispy skin that we are yearning for more after emptying the whole plate. The grilled pork is a bit charred but it's tender and taste like our local char chiew. The som tam is quite spicy and we still prefer the som tam from Som Tam Nua. 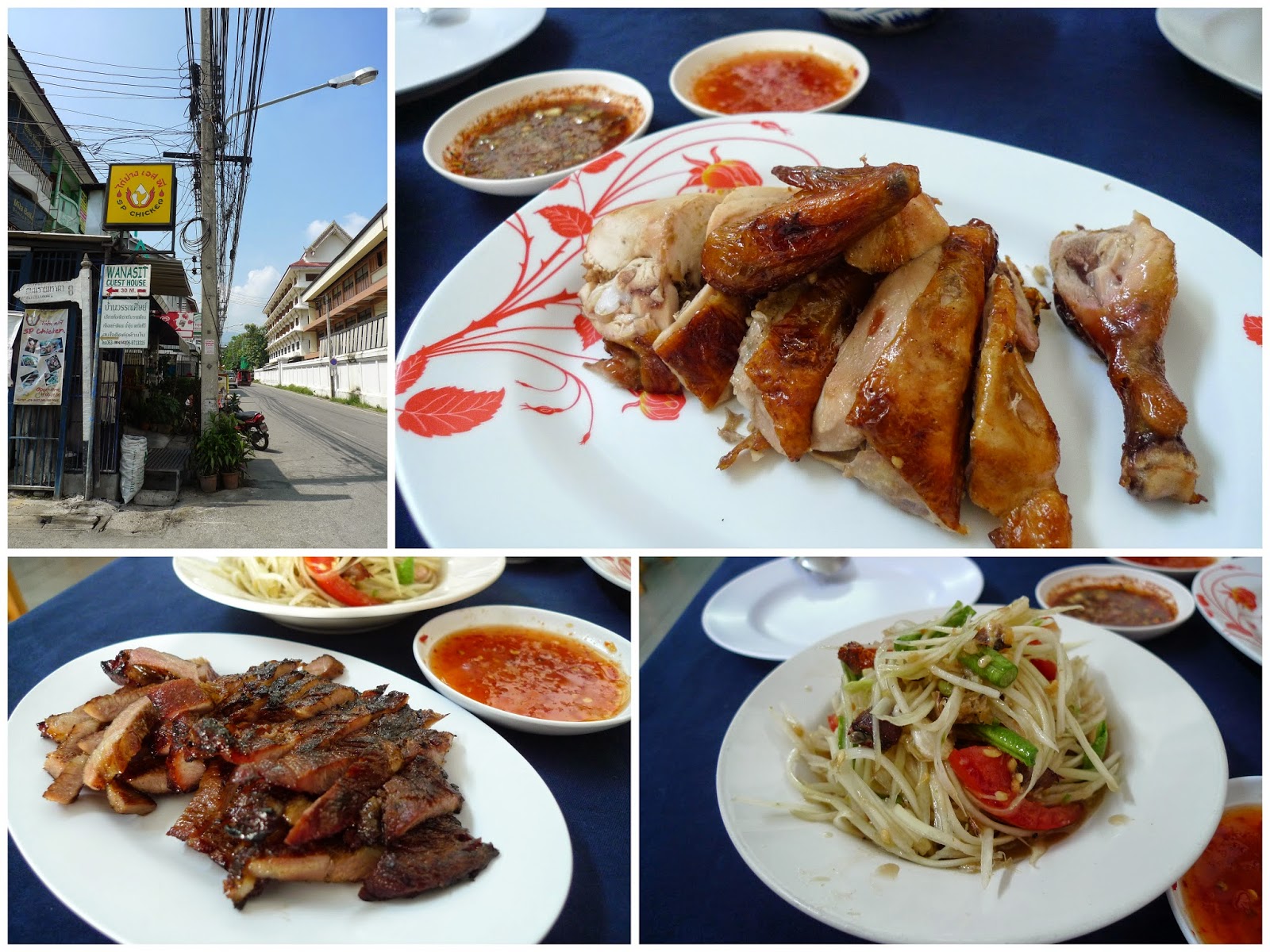 We popped by Wat Phra Singh which is nearby and there is an admission fee of THB20 ~ S$0.80. Rental of sarong or shawl is free here as visitor cannot enter the main hall with sleeveless shirt or short/ dress above the knee. The temple houses an important Buddha statue: the Phra Buddha Sihing which gives the temple its name. 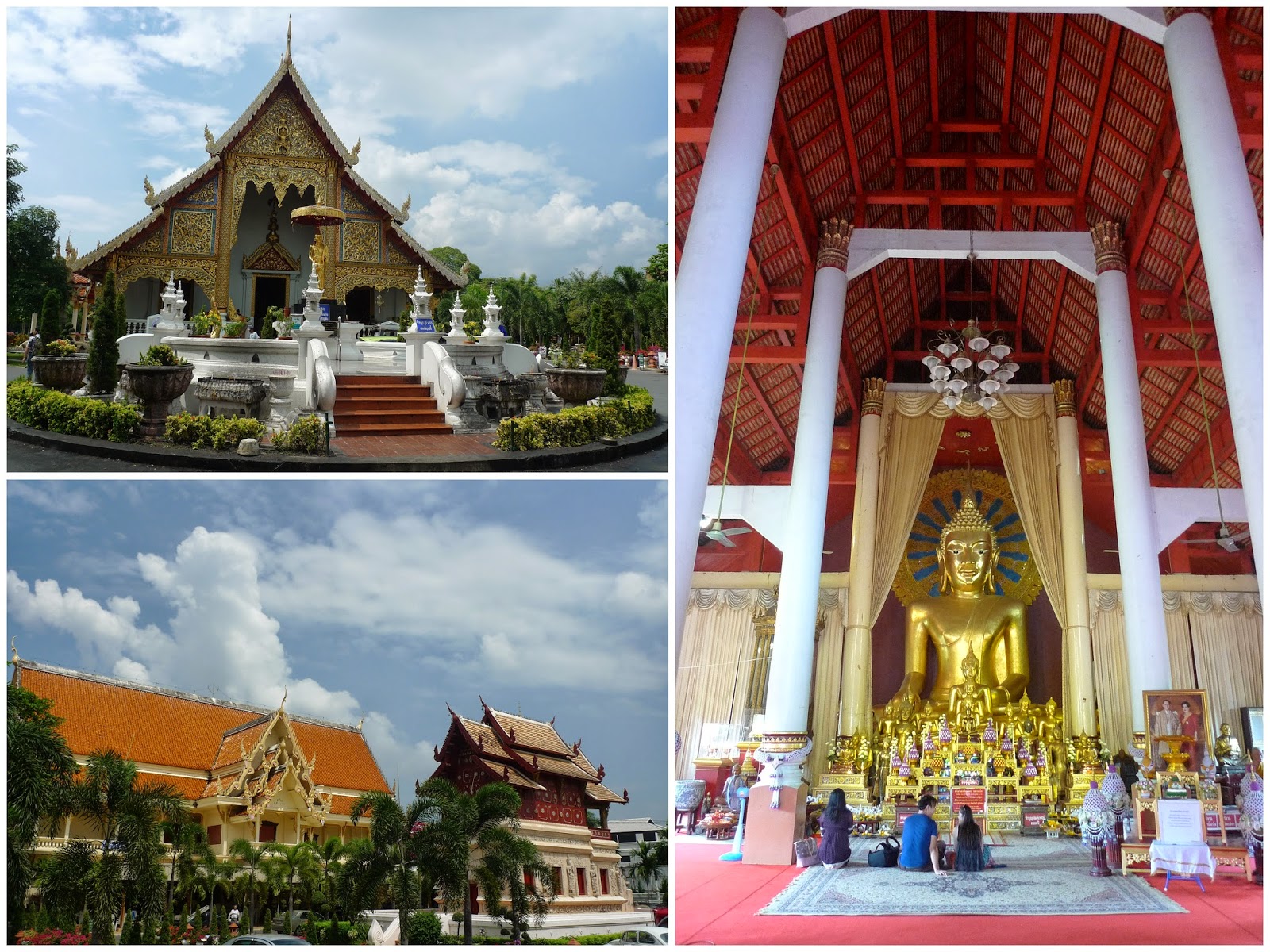 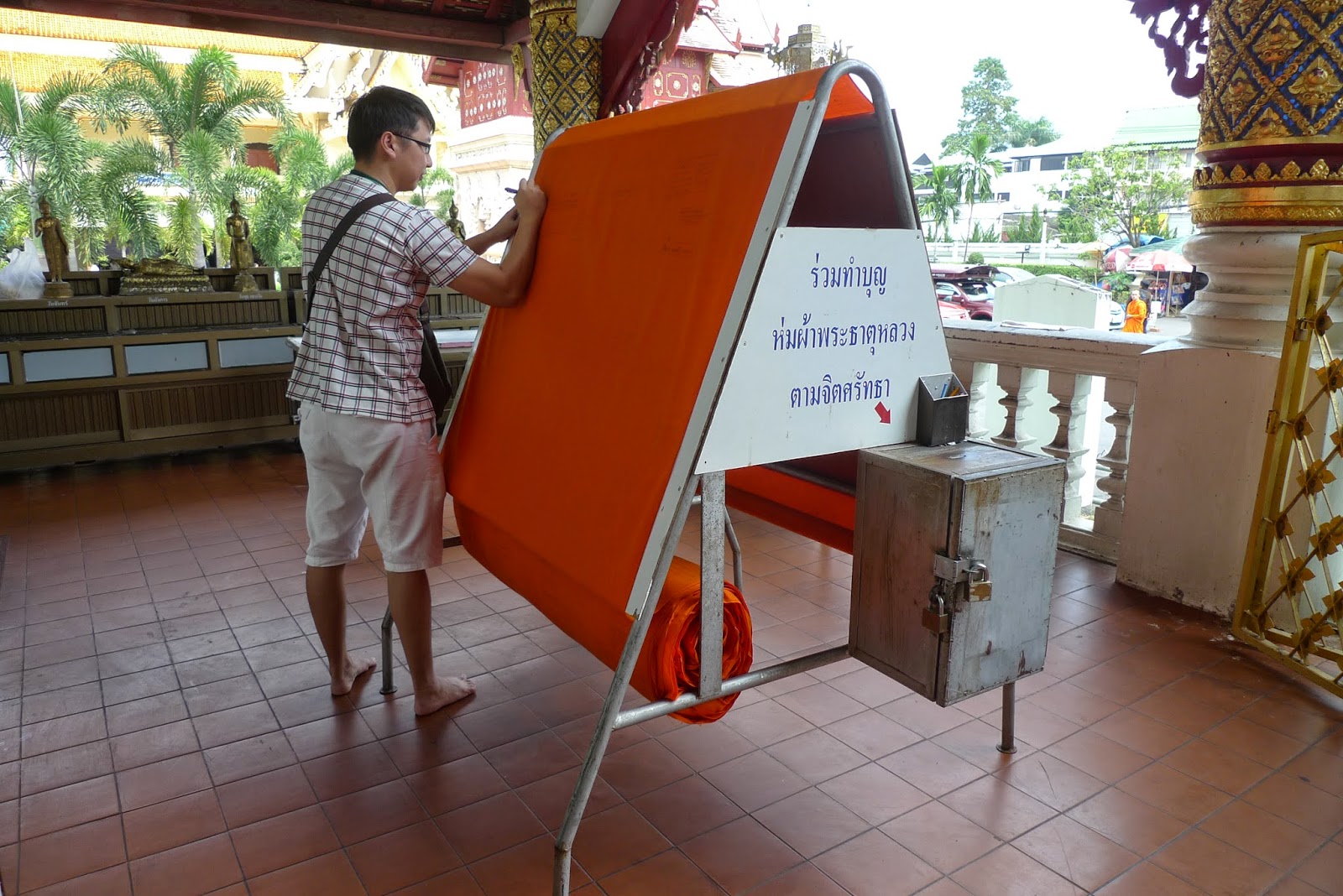 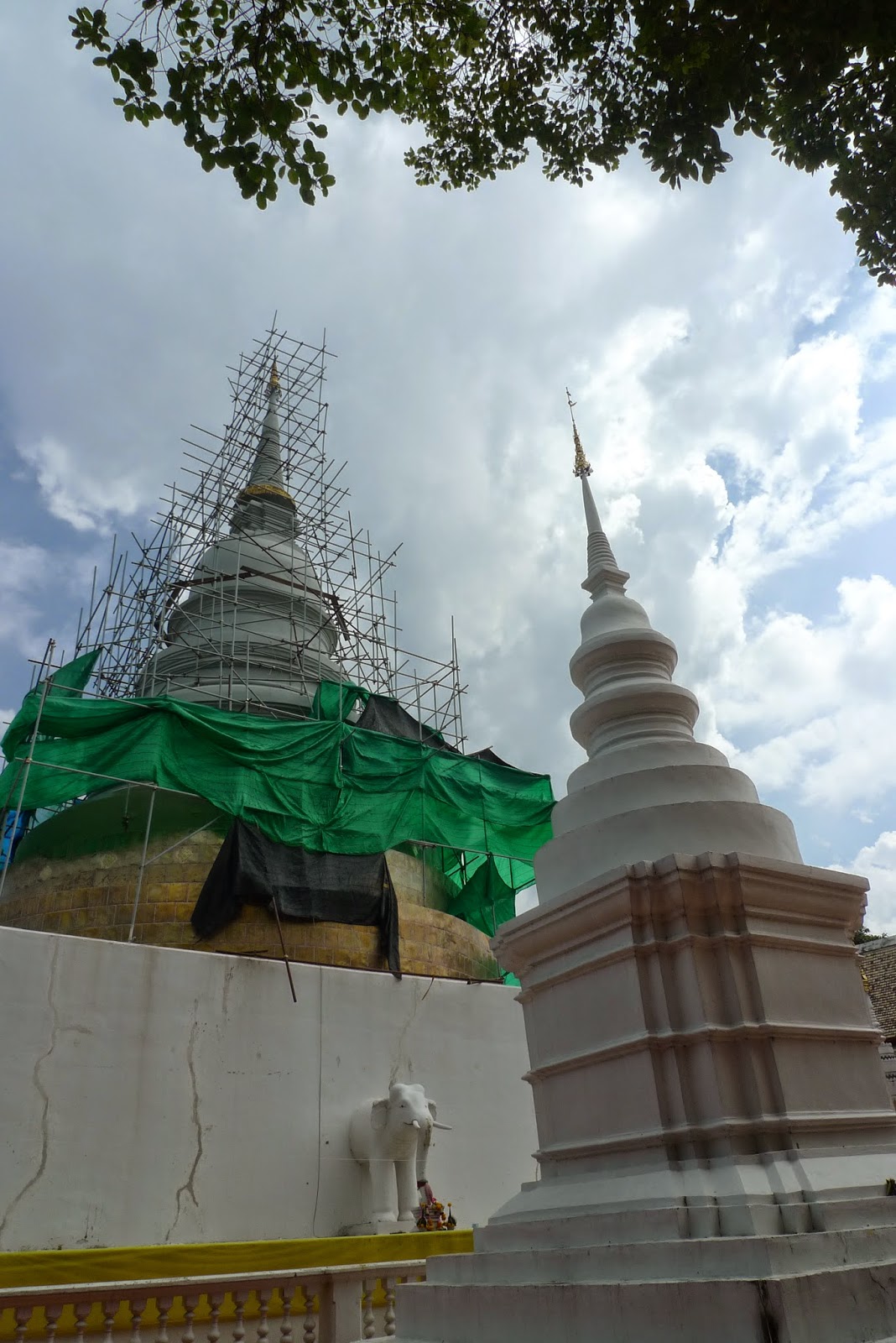 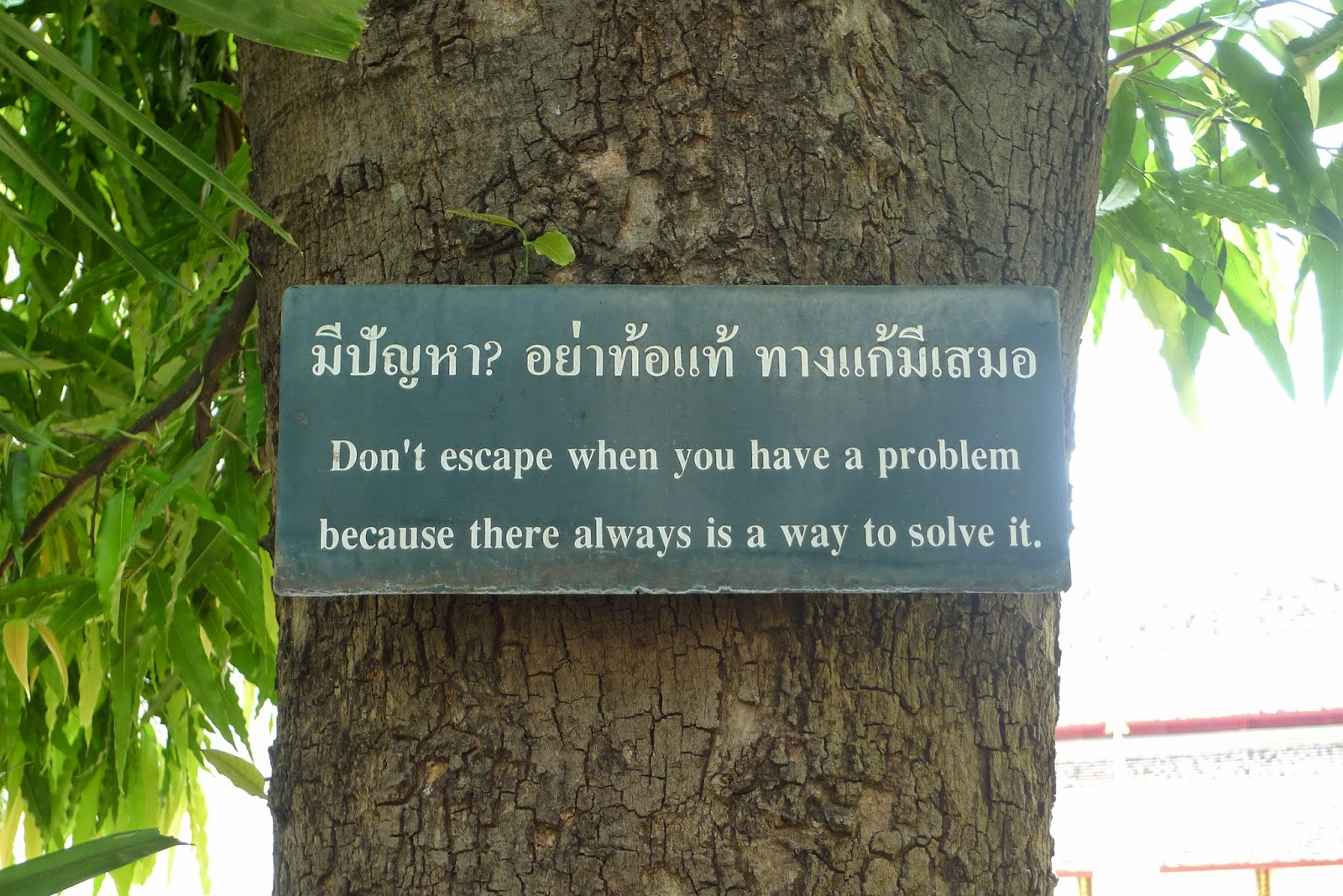 We then walked to Wat Phan Tao at Prapokklao Road. Wat Phan Tao means "The Monastery of a Thousand Kilns" as the site was used for the casting of Buddha images intended for Wat Chedi Luang, which is adjacent to the monastery. Wat Phan Tao is entirely made of teak wood and is one of the very few remaining in Chiang Mai. 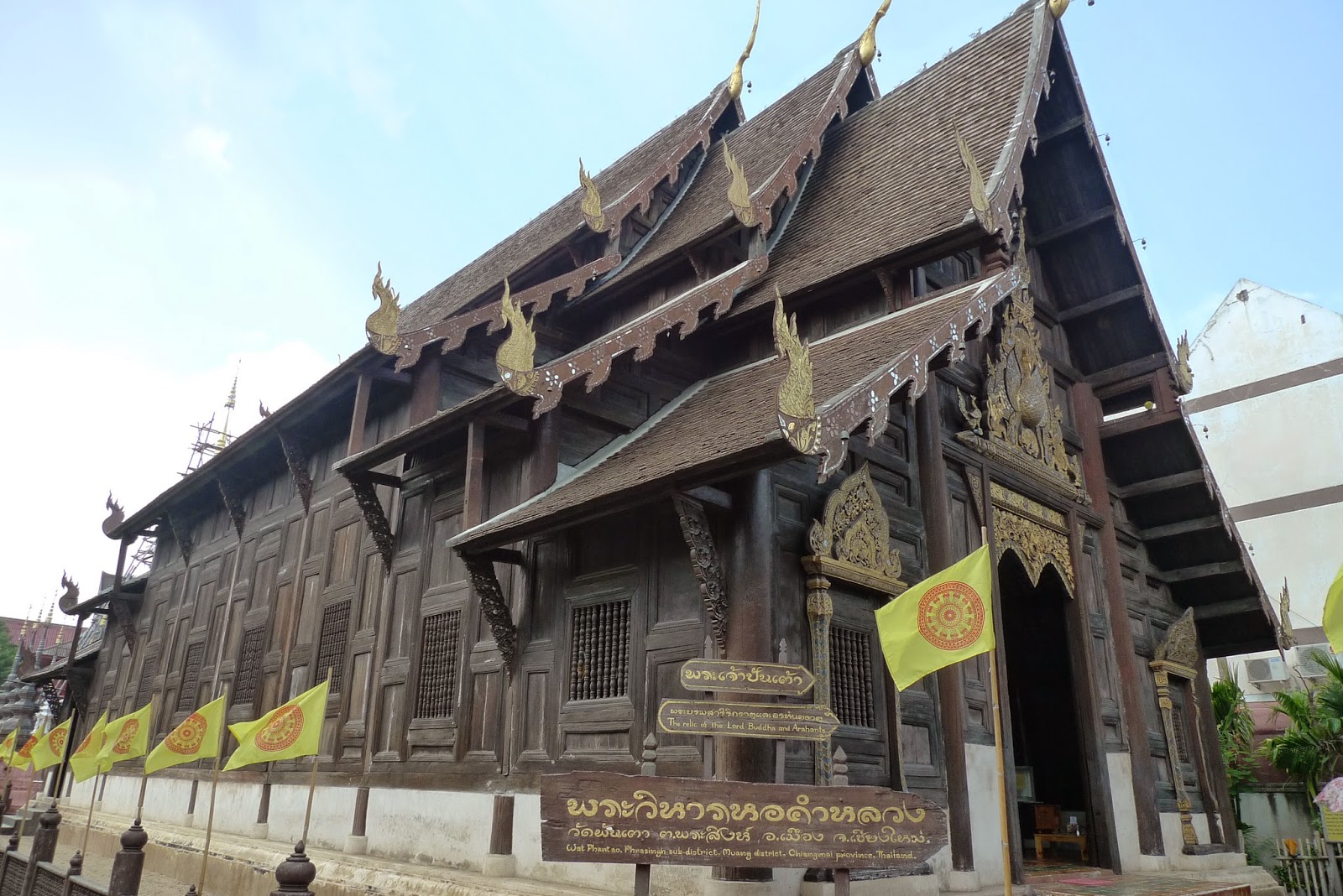 We saw devotees clipping THB20 note on a stick and insert the stick on a Styrofoam ball. It is indeed an unique way of donating. 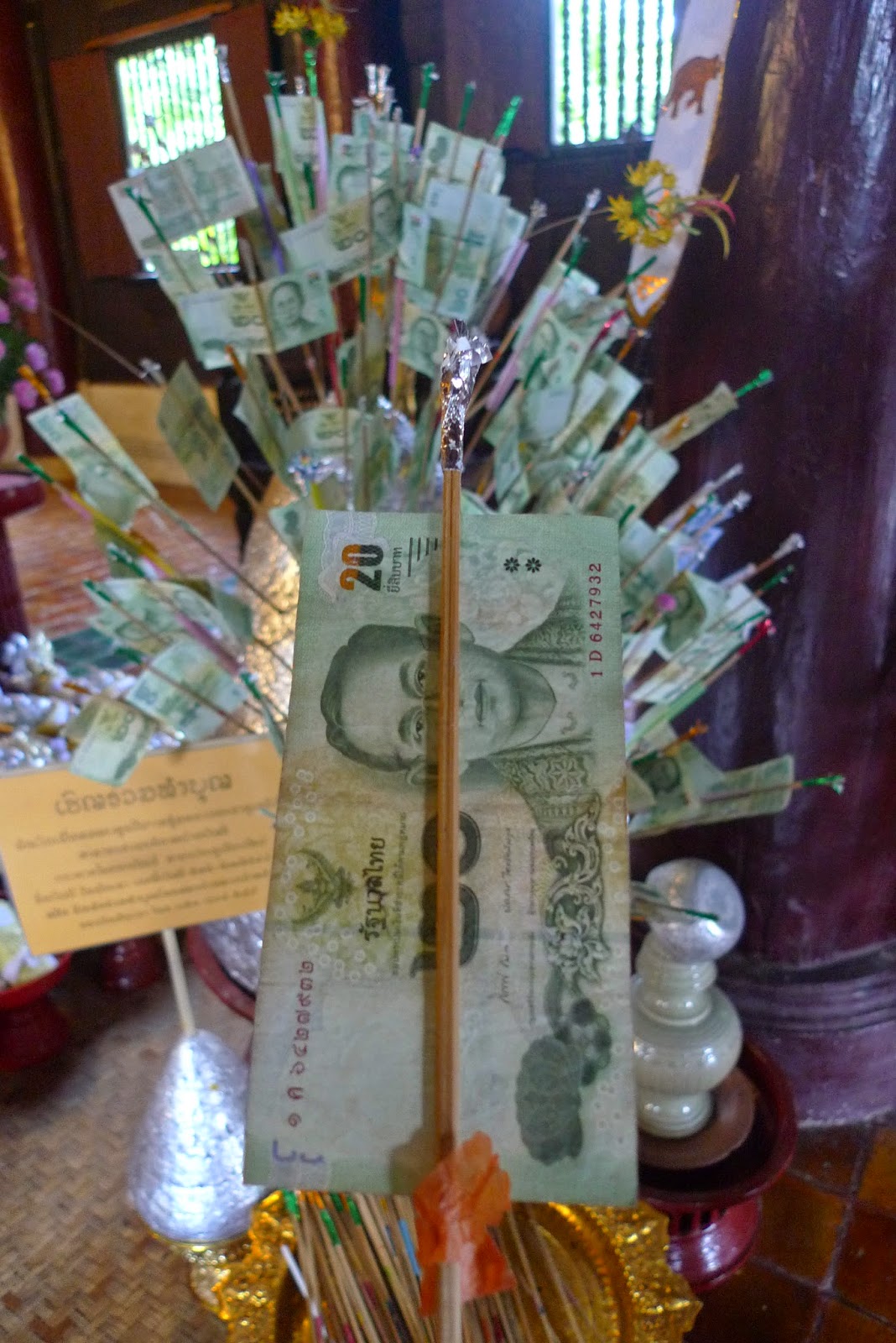 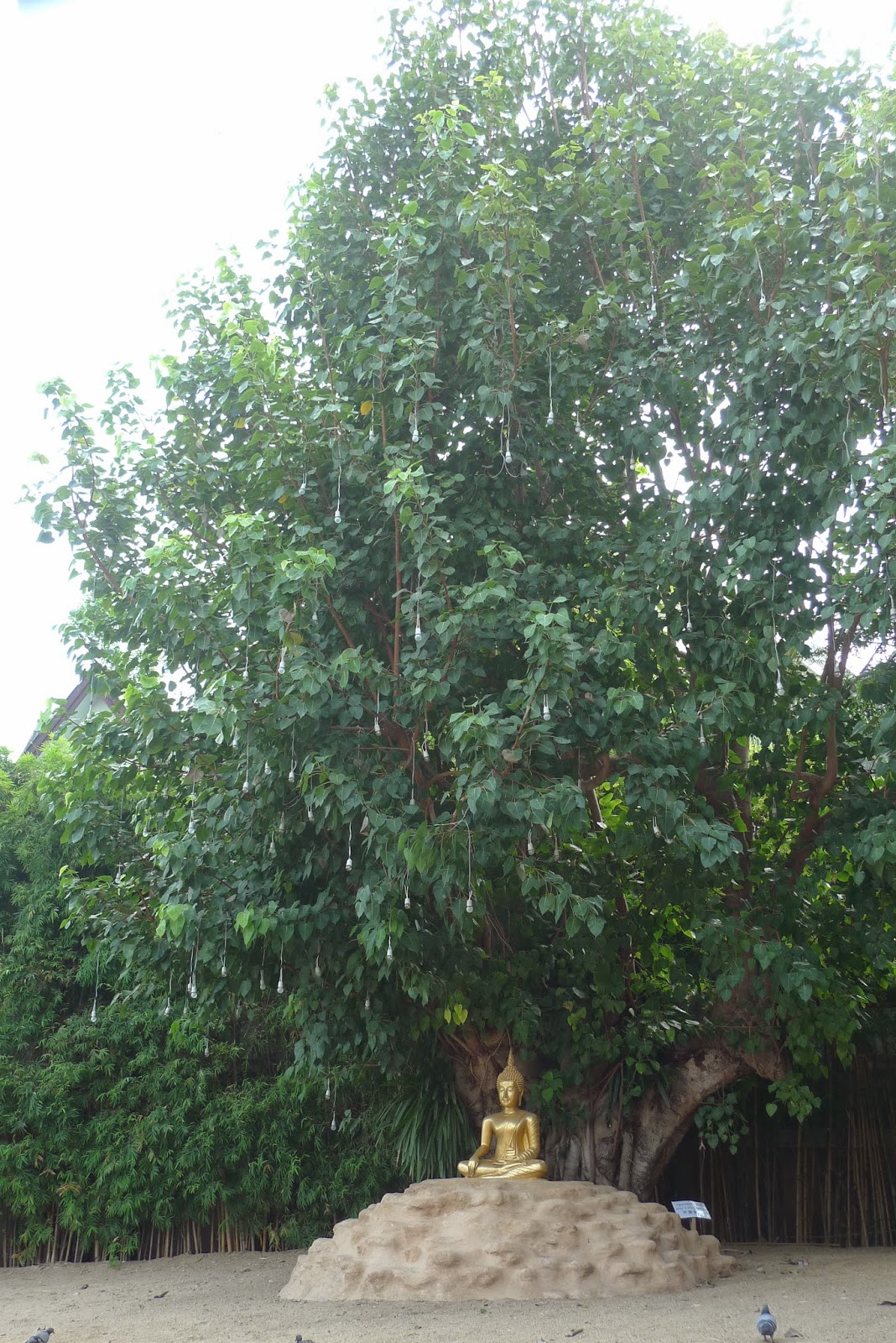 This resemble the Buddha enlightment under the Mahabodhi Tree

Wat Chedi Lauang is an impressive ruin temple which used to house the Emerald Buddha until it was stolen by the Laos. 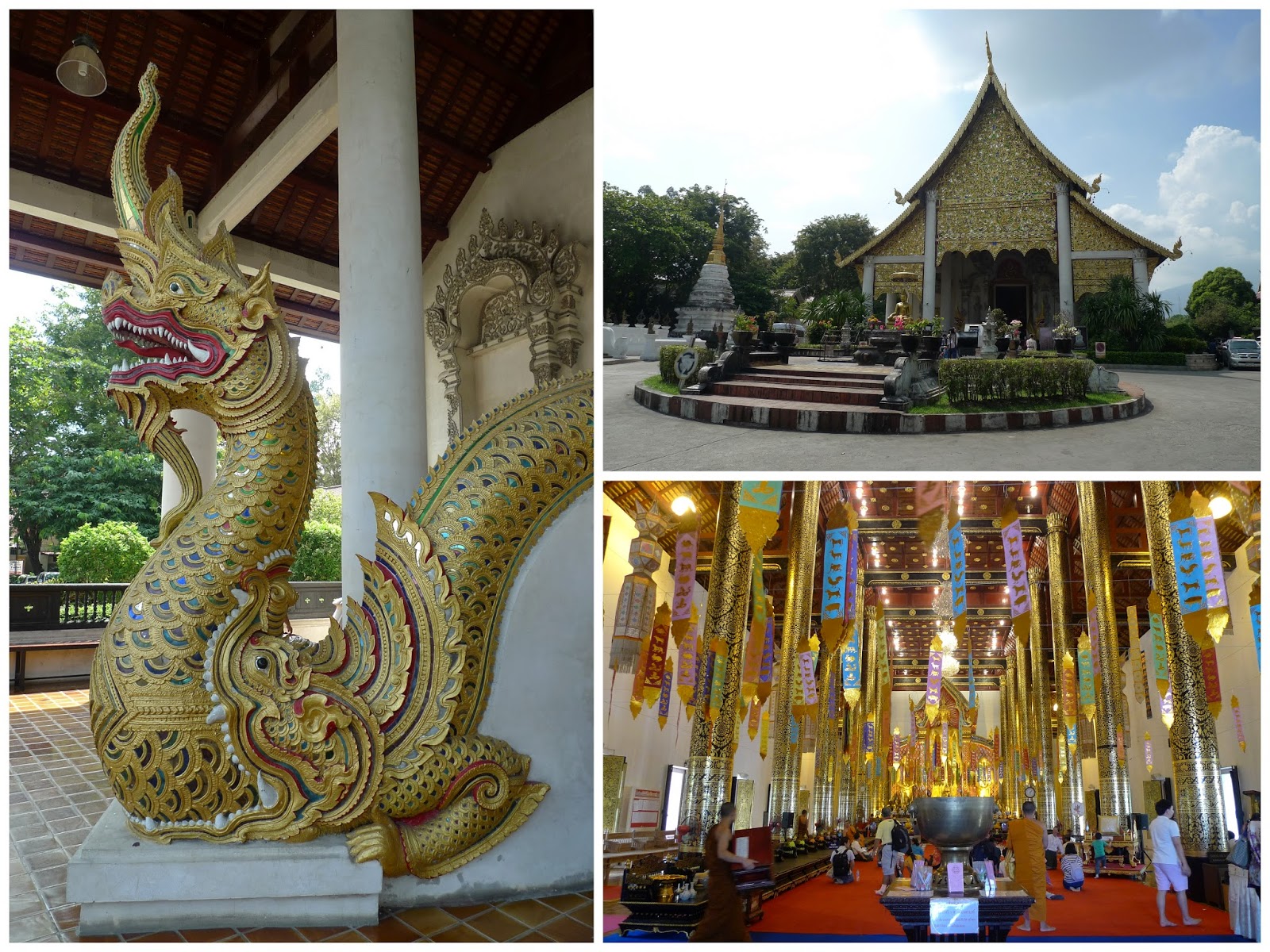 We bought the Tung Tao Poeng for THB100 and wrote our names on our zodiac to ward off bad things. The Thai zodiac is exactly the same as the Chinese zodiac. 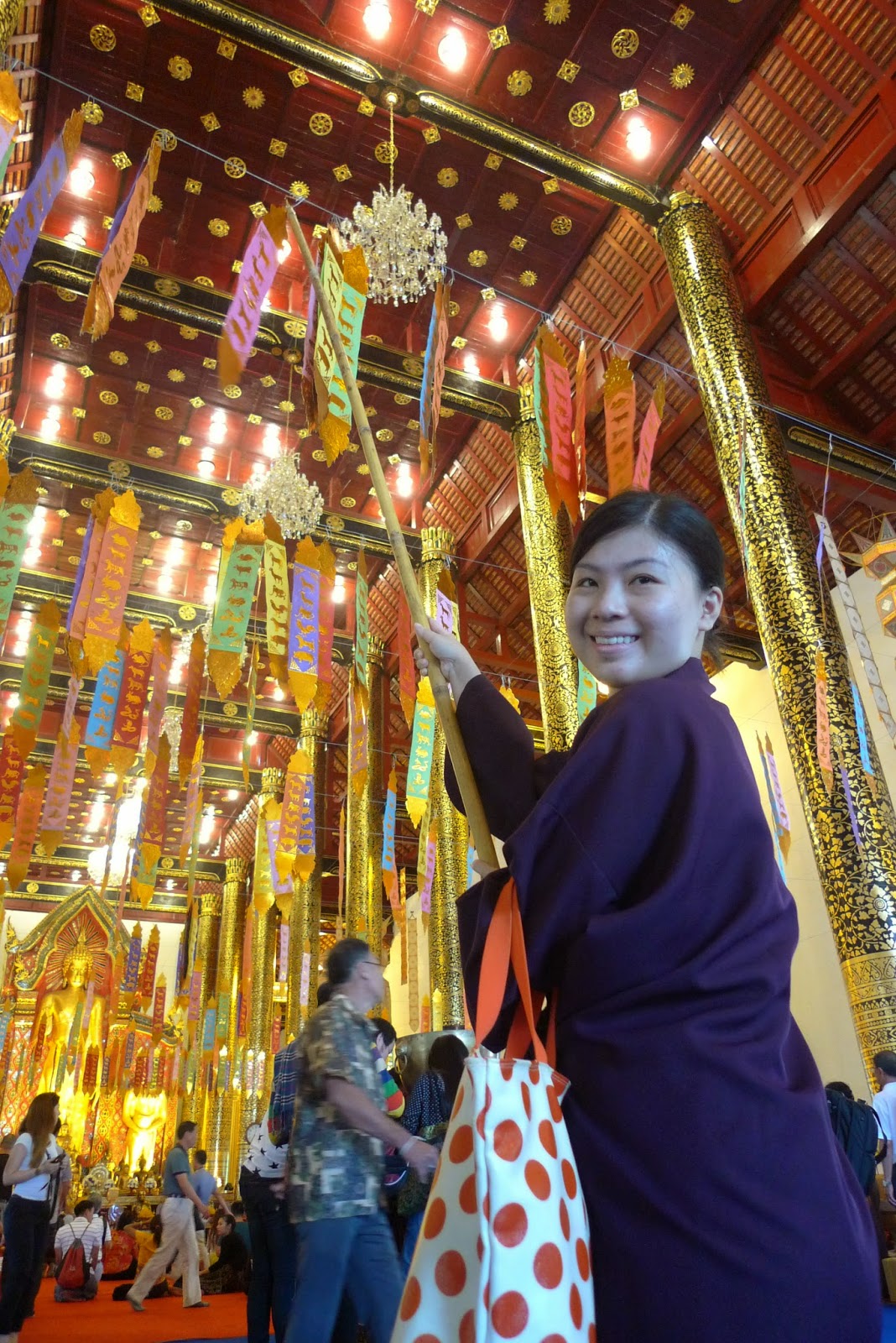 The chedi was damaged during an earthquake in 1545 and it's height is reduced to nearly half of its original size. 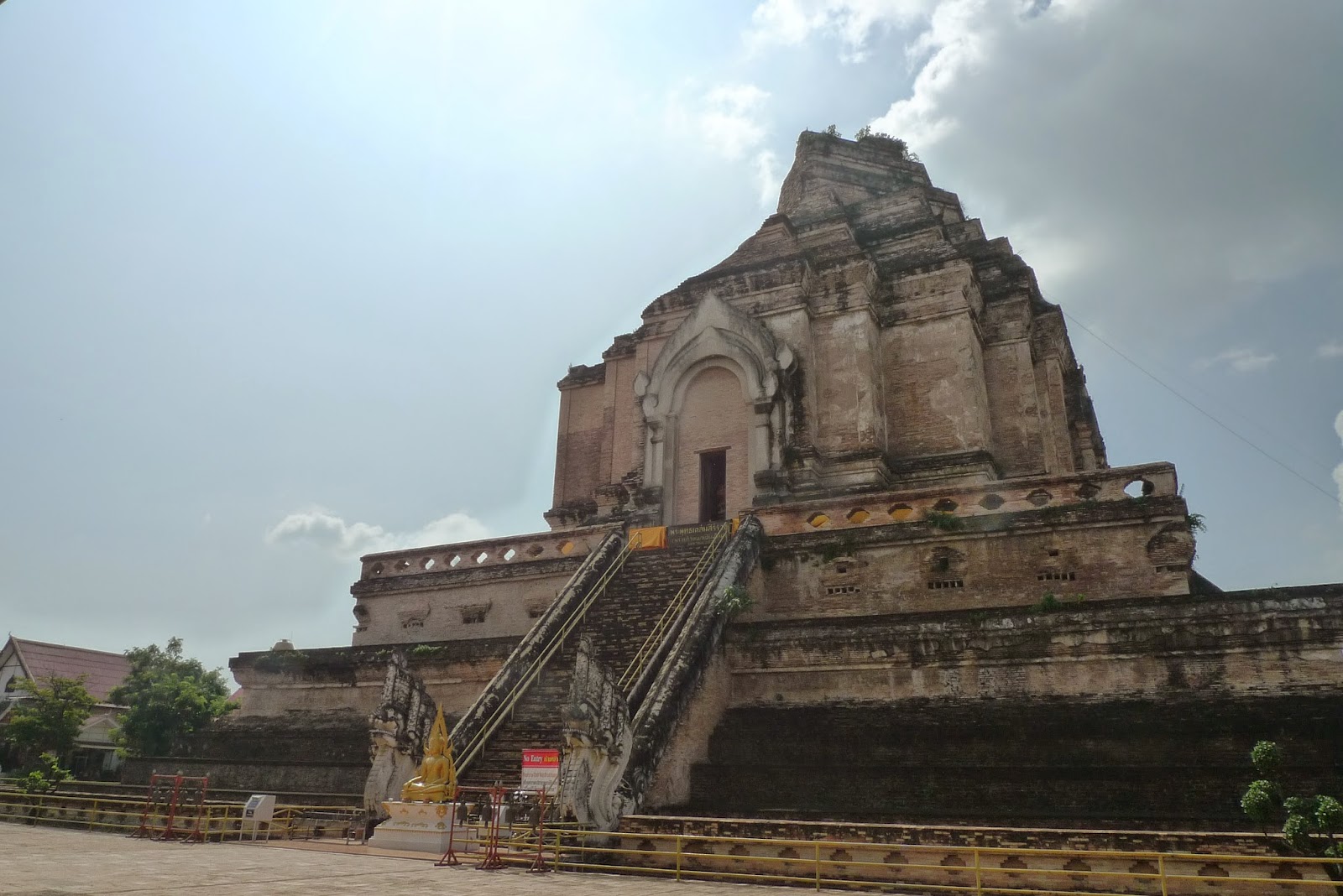 The last temple which we visited inside the old city wall is Wat Chiang Man (Location: Rajpakinai Rd). This is the first temple to be built in the Lanna Kingdom. 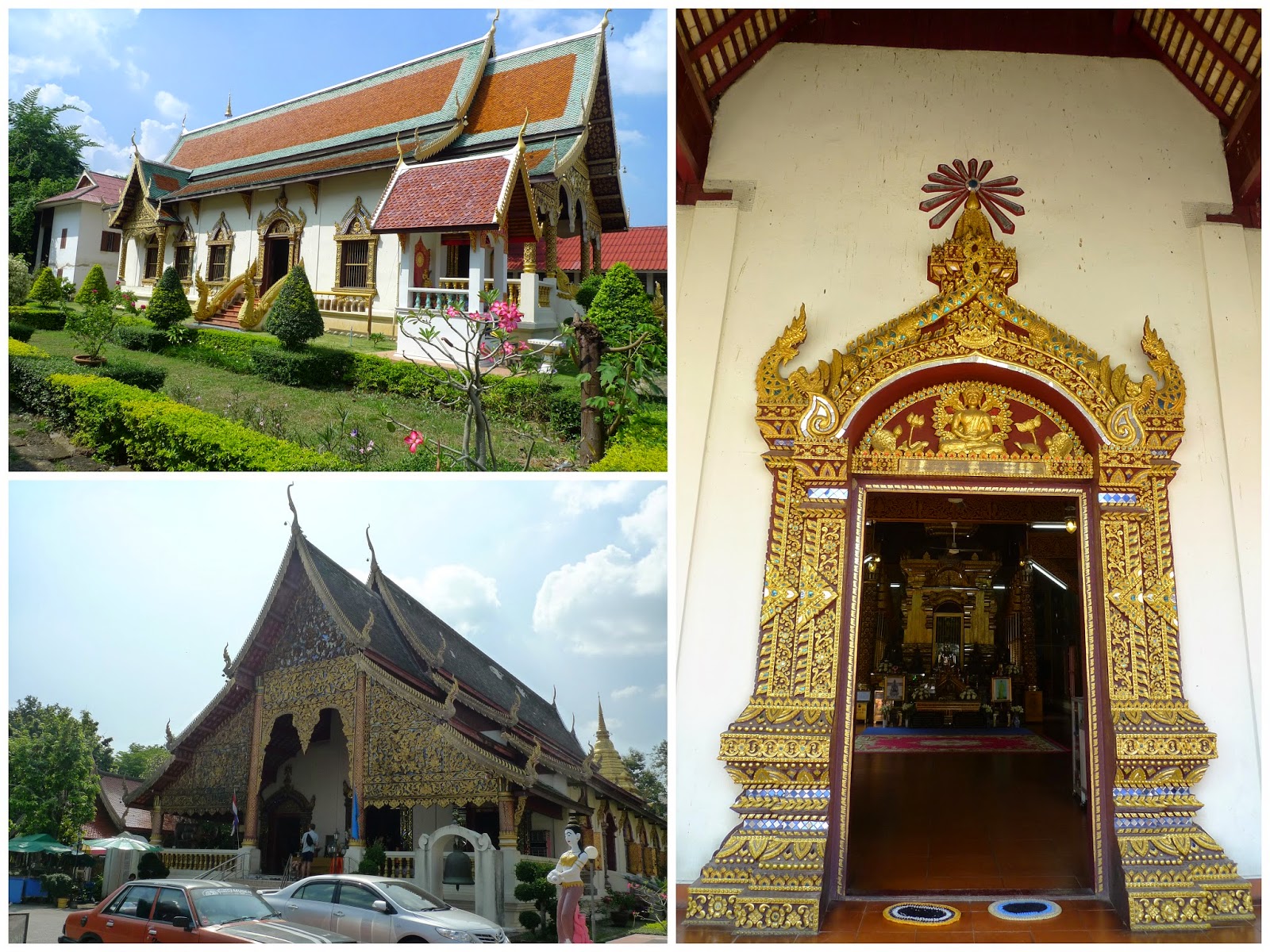 From Wat Chiang Man, we walked to Om Healing Hands for massage. The massage we had at Green Bamboo yesterday was not good so I google for the next best massage featured in tripadvisor and that's how we ended up at Om Healing Hands. 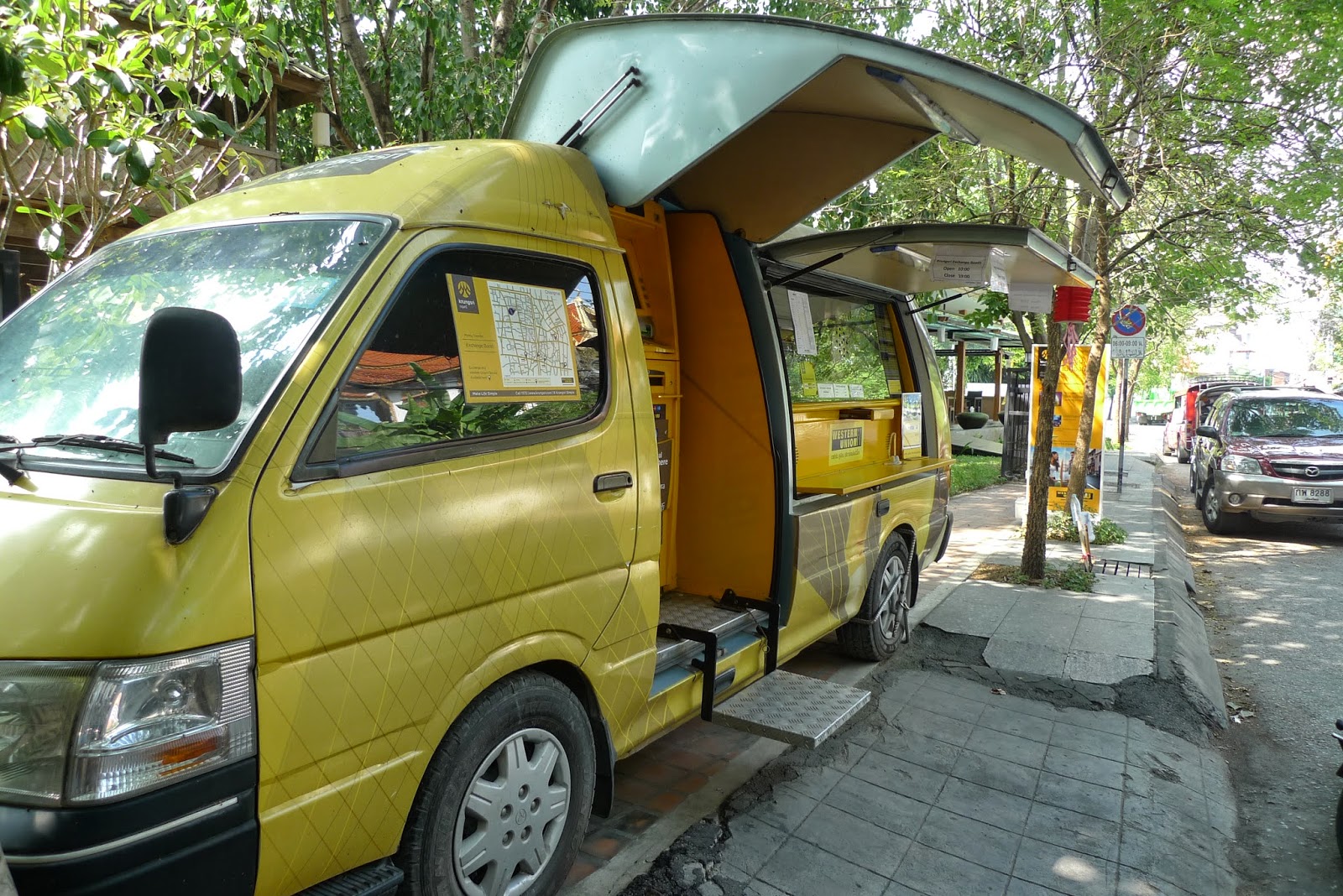 It looks like the masseur here are freelancer as we were told to wait for 15min and when masseur arrived, they do not wear standard uniform. We had 90min Thai massage and we concluded that the massage is a bit better than Green Bamboo but still fall short of our expectation. 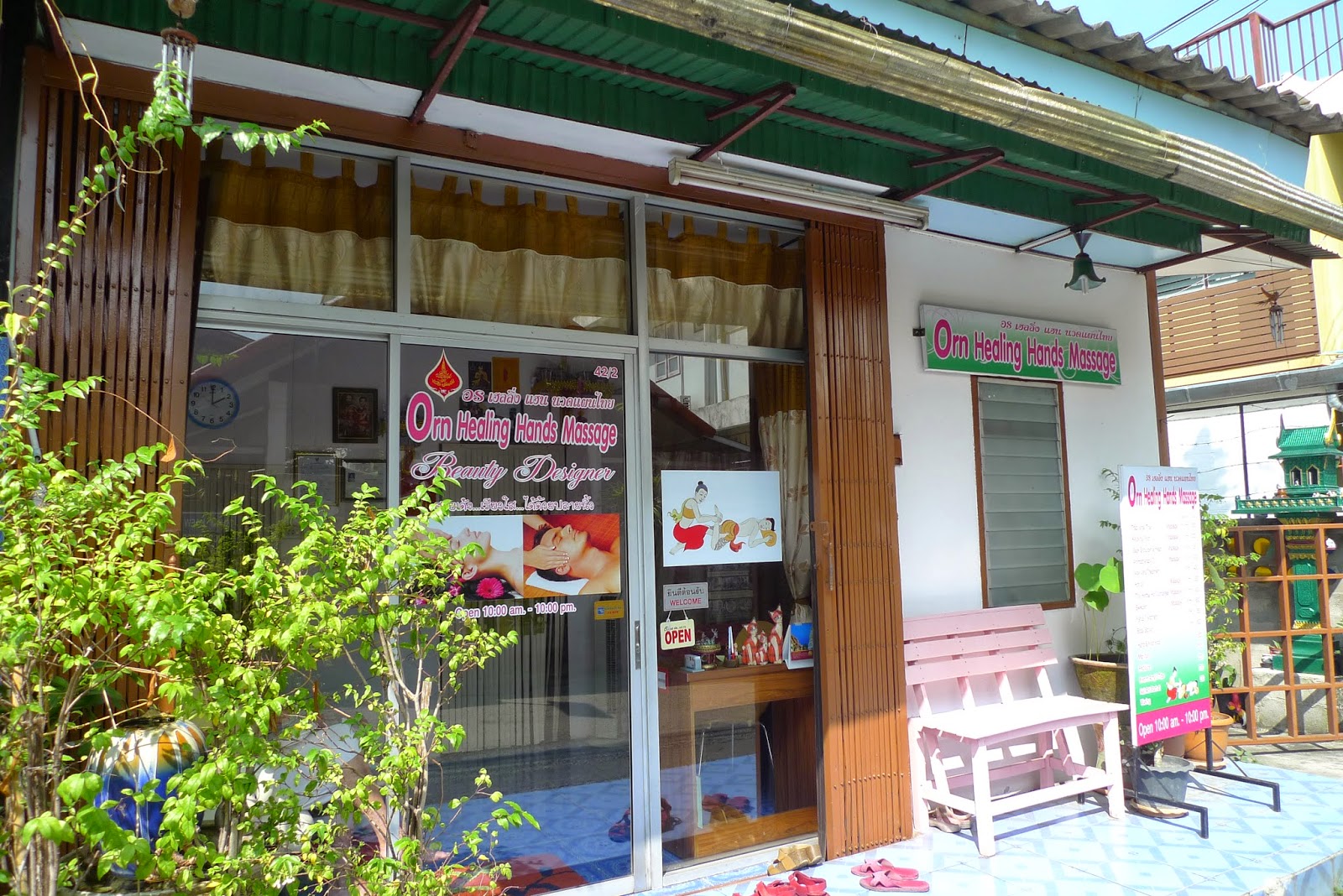 We then took a tuk tuk to 137 Pillar House for afternoon tea. (Add: 2 Soi 1 Nawatgate Road & Afternoon tea timing: 2.30pm - 5pm). 137 Pillar House is a luxury boutique hotel which has only 30 rooms and is located near the Ping river. It's called 137 Pillar House as the teak house which houses the bar and lounge is actually supported by 137 pillars. 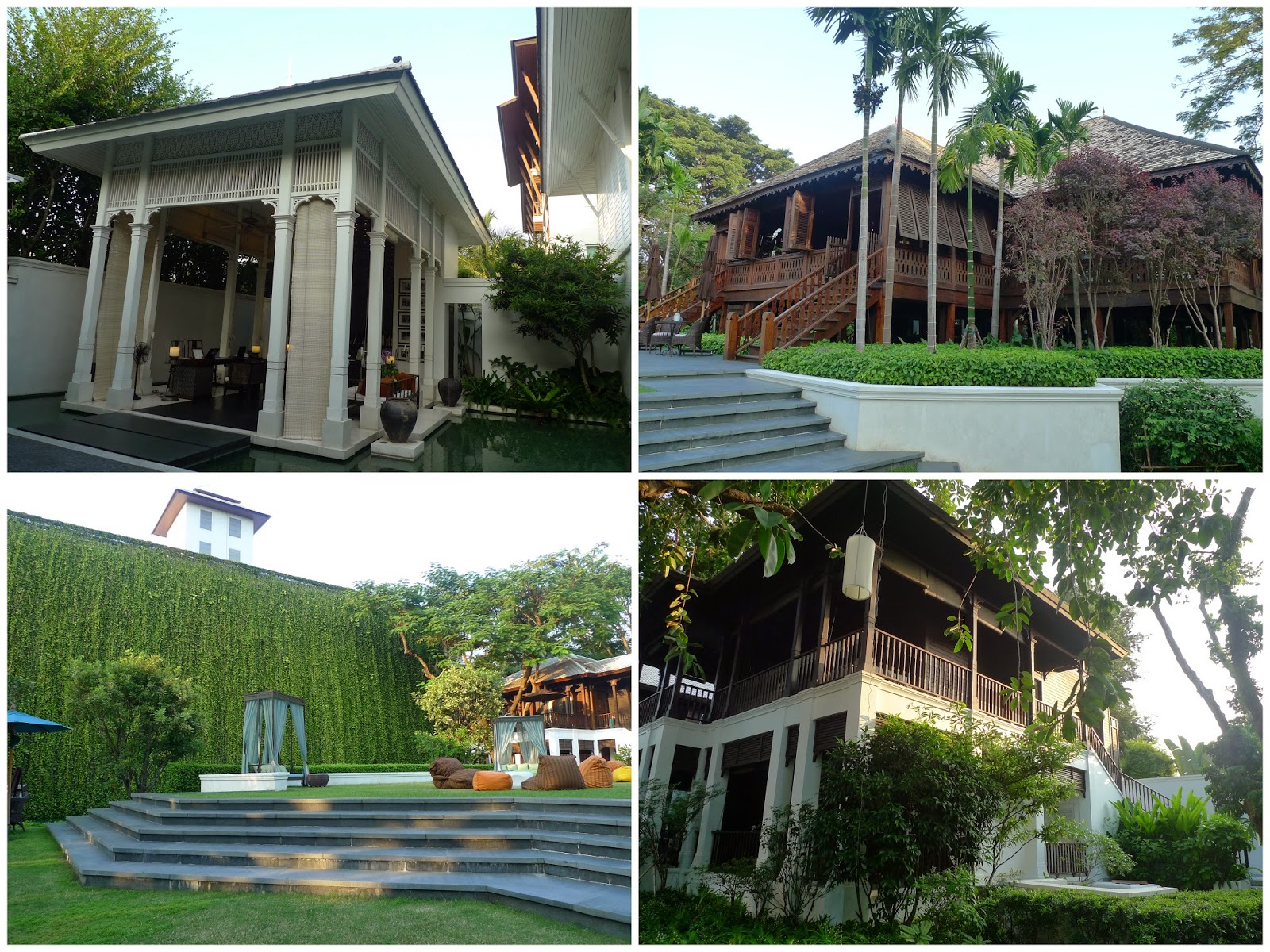 We have the option of having high tea outdoor or indoor and we choose indoor to escape from the heat, so we were guided to Jack Bain's Bar where we are the only 2 customers. Wow, it's like a private and exclusive afternoon tea session for us. 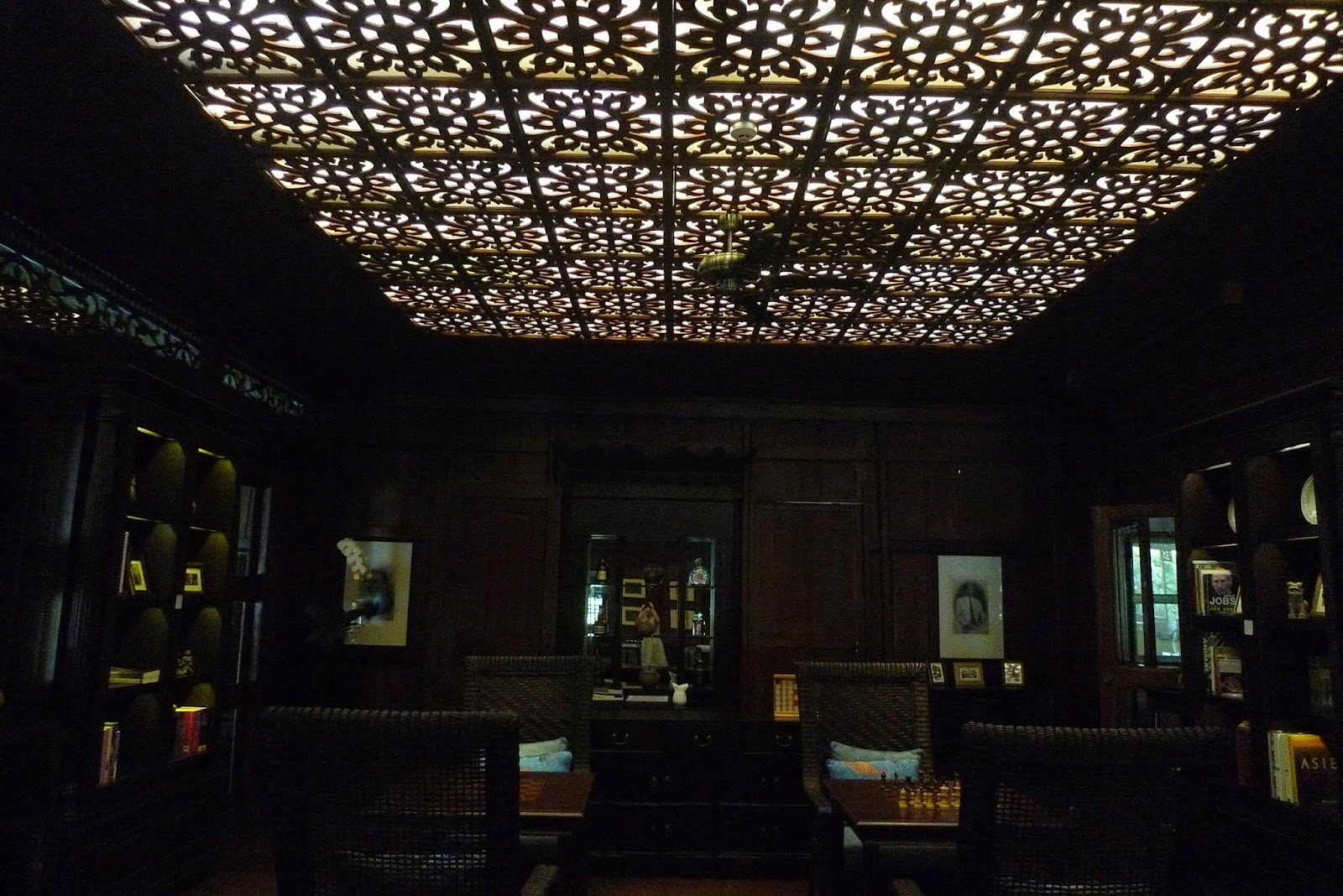 The classic afternoon tea cost THB1,300 ~ S$50 (inclusive of service charge & taxes) for 2 pax. We can choose from a range of tea and coffee and hubby picked Lemongrass while I had Chamomile. We started with lychee sorbet which give a very refreshing taste. Then we had 3 tiers of pastries and sandwiches and a plate of dessert. The desert which caught our attention is deep fried vanilla ice cream coated with gold. 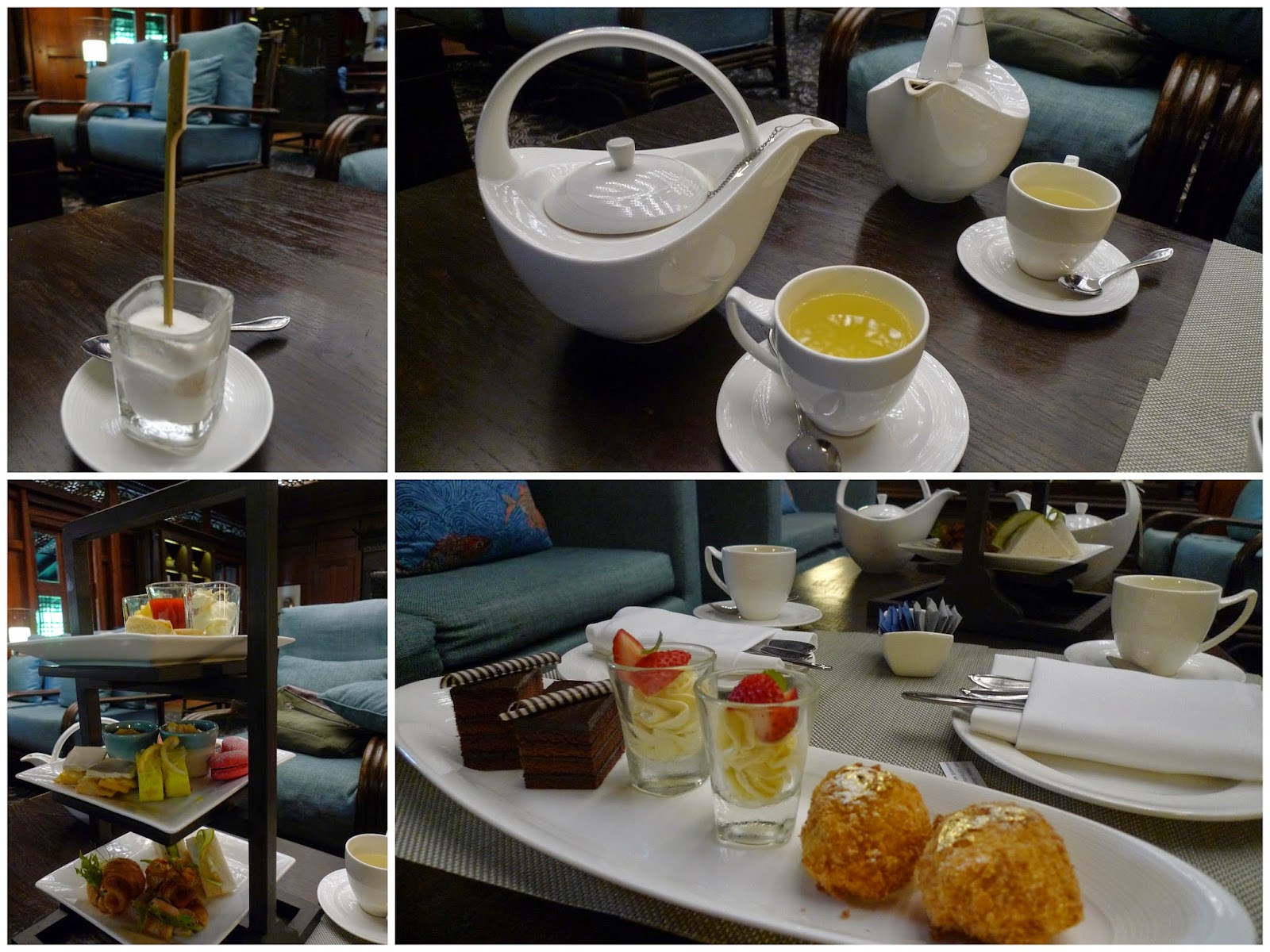 After the afternoon tea, we walked around the compound and every part of the hotel is worth to be photograph. Hubby even asked me why we are not staying here for this trip. 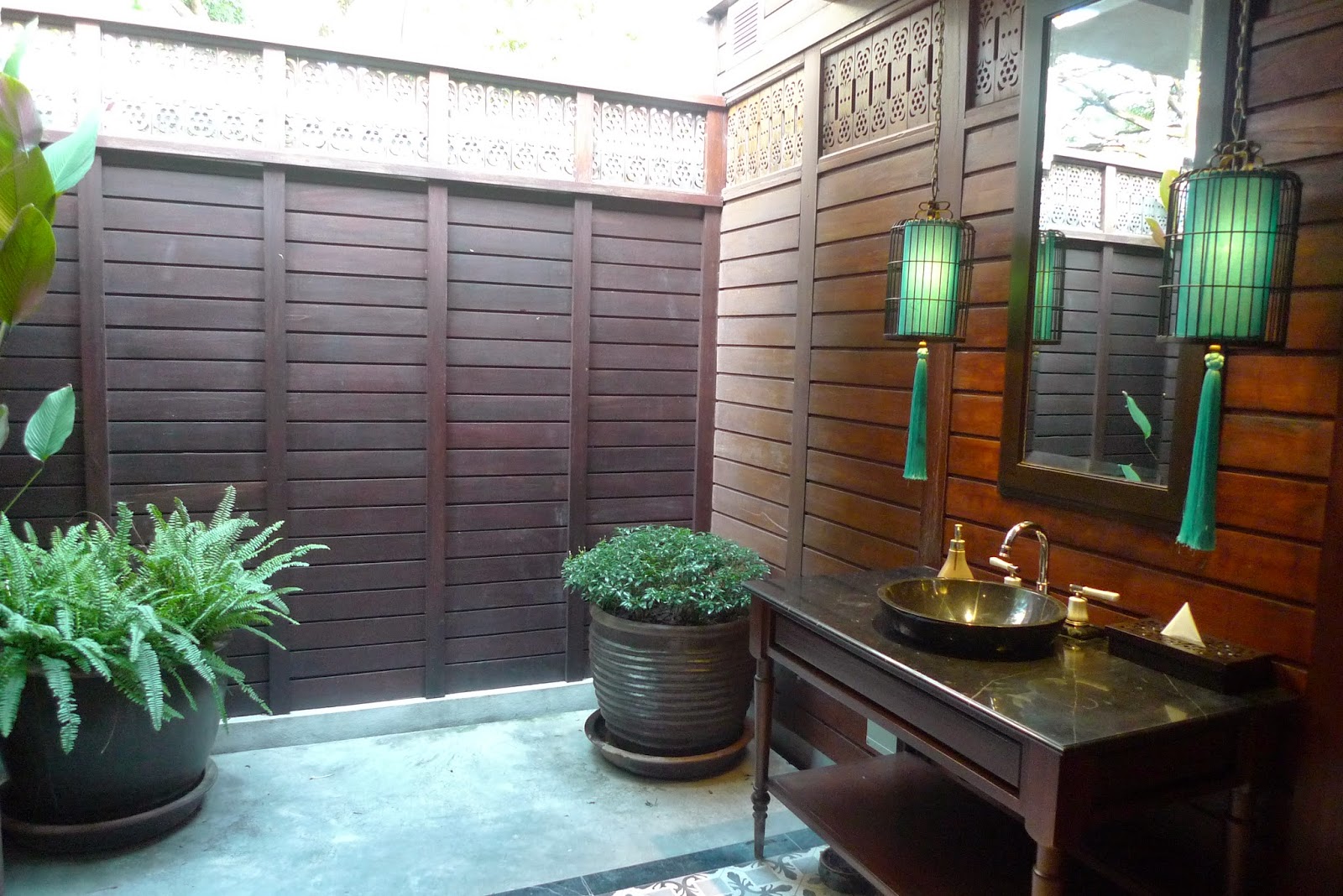 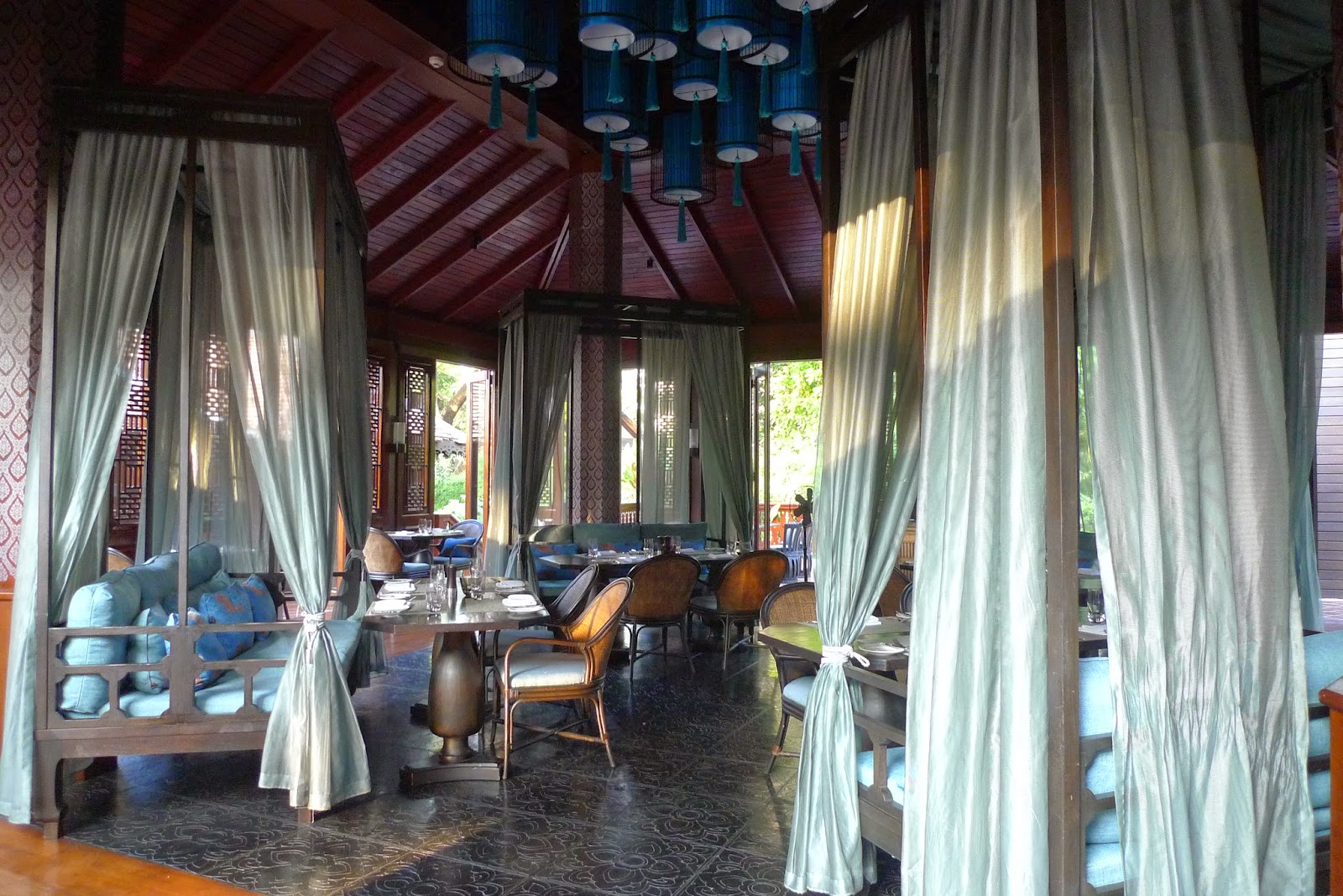 We then took a tuk tuk back to hotel before the prebooked taxi came to pick us at 6.30pm. We have arranged the taxi for  THB300 ~ S$12 one way when making the reservation as the restaurant is 20min away from Chiang Mai city. David, the owner was standing at the entrance welcoming us to his restaurant. There are indoor and alfresco seats in the restaurant but we preferred the cosy indoor seats. At first I thought the music was played from CD and only realised it's lived music when hubby told me that there is a pianist. 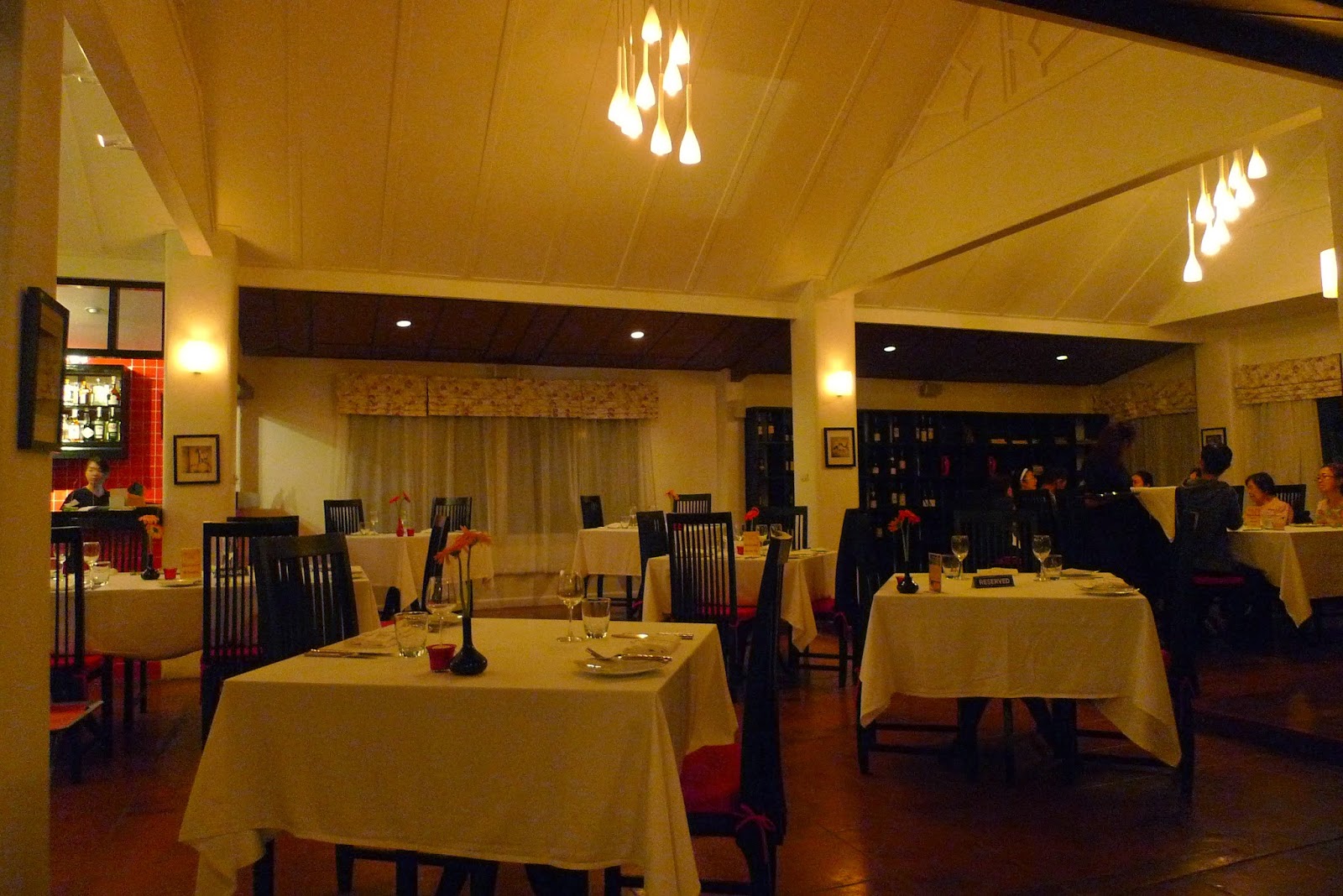 We had the 3 course set dinner which includes a glass of wine for THB999 ~ S$39 per pax. Hubby had chilled tomato soup, Grilled duck breast and sticky toffee pudding while I had smoke duck breast salad, baked salmon and chocolate mousse. The food was pretty good. I didn't know when hubby has arranged with the staff to sing a birthday day for me as I had make the reservation earlier on. I feel shocked and surprised with hubby arrangement. 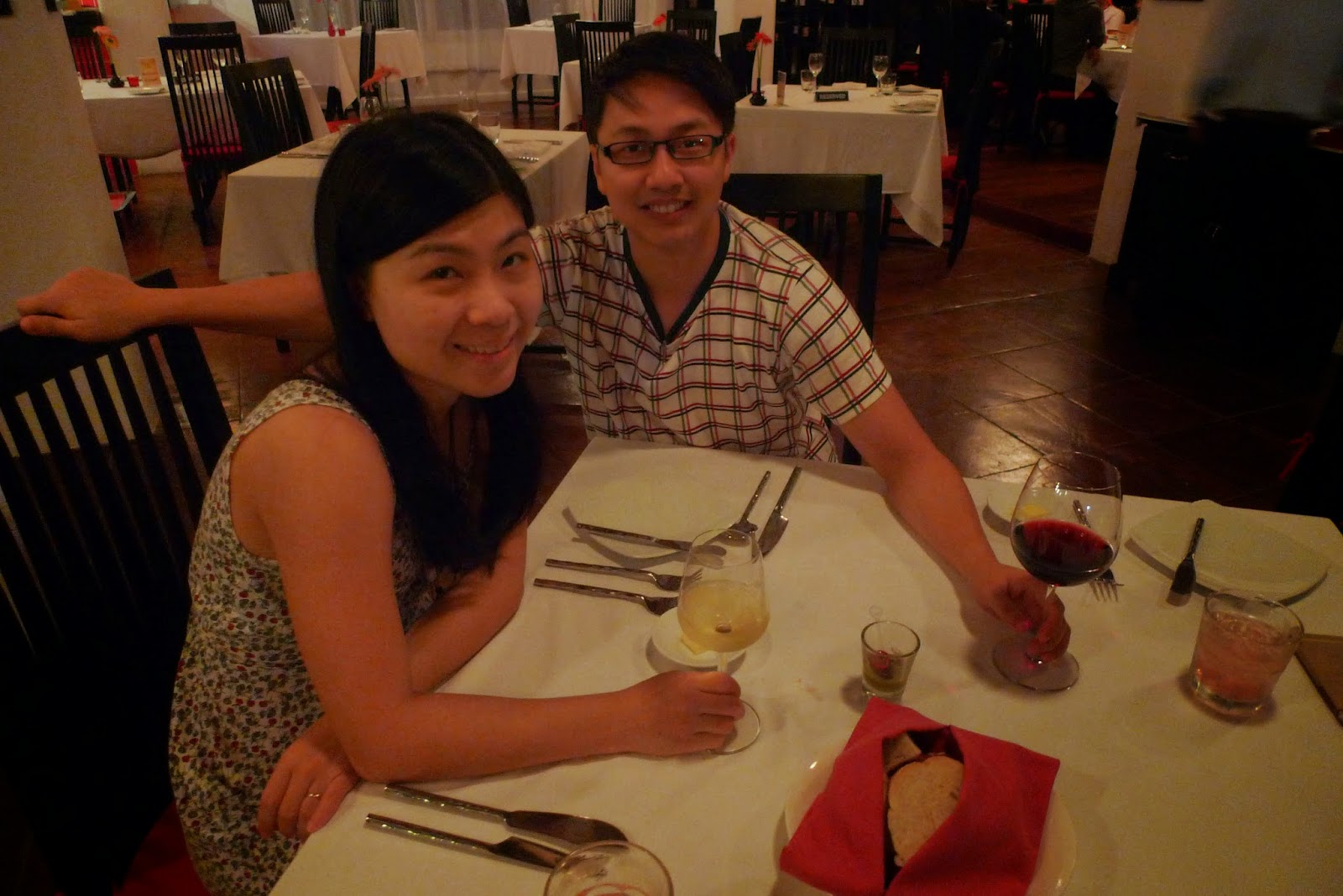 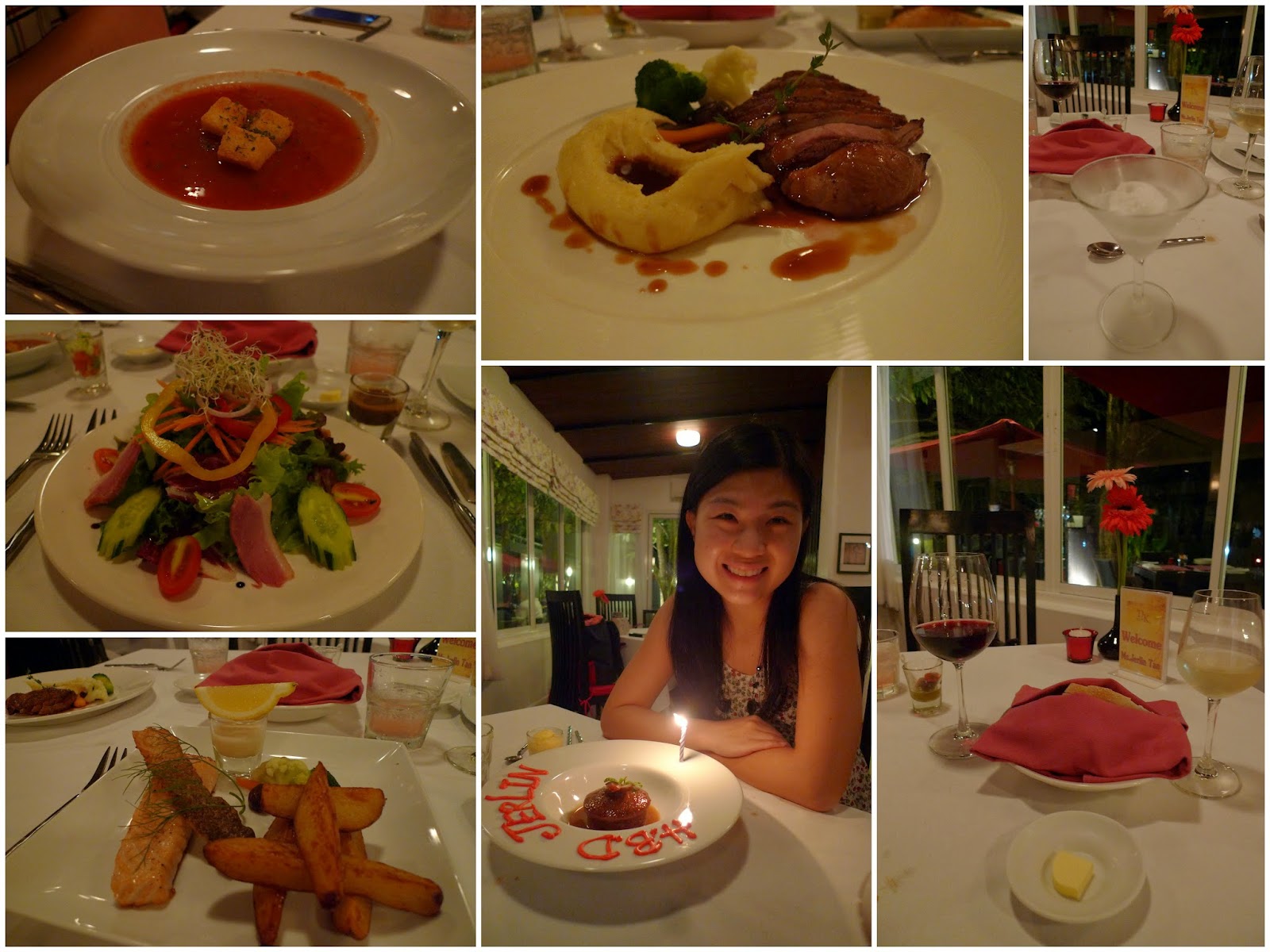 After dinner, we took the same cab back to the hotel.