We woke up at around 8am and pack our luggage and left them at the receiption area before heading out for breakfast. As we are staying on the 13th floor, we had to board the odd floor lift down to ground level and change to the even floor lift to 14th floor. How come the lift here don't have access to every level???
We went to Victoria Habour Restaurant for dim sum. Since today is the last day and I had only planned to go to Wong Tai Sin Temple and Chi Lin Nunnery, we had plenty of time. 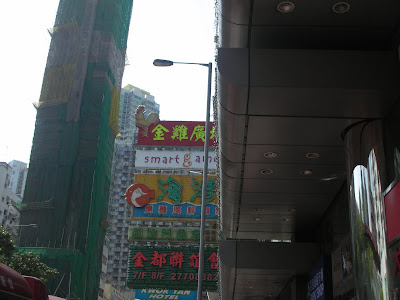 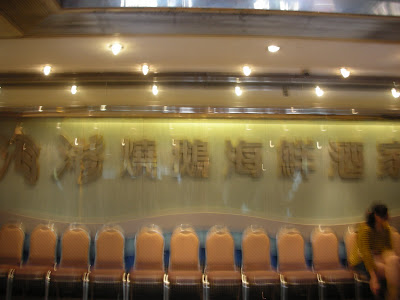 We ordered Char Siew Bao, Siew Mai and Ha Gao. It takes quite some time as they only steam the dim sum upon placing order. We waited for very long and yet our Ha Gao has not been served. We decided to order some dessert and we thought that 糕 means Kuei and we intend to takeaway. When it was served, it's those jelly so we ate it on the spot. We were really quite full after eating so we settled the bill without waiting further for the Ha Gao. 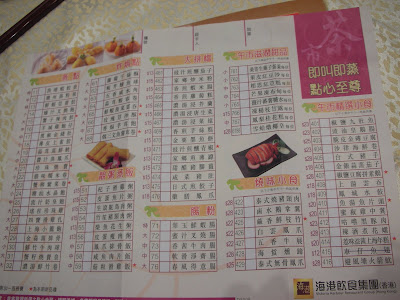 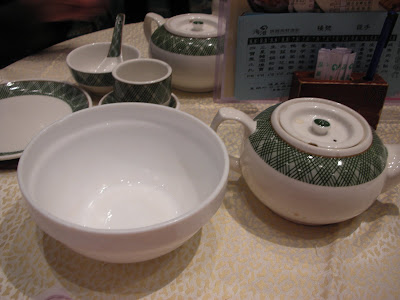 Bowl for washing the chopsticks, spoons and cups 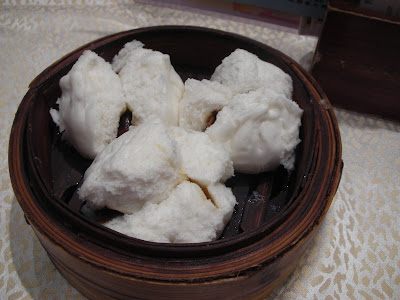 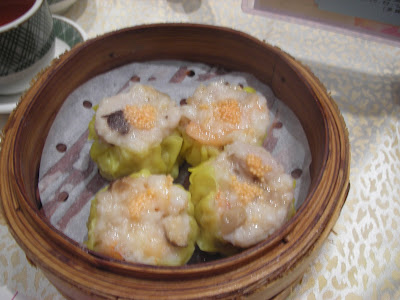 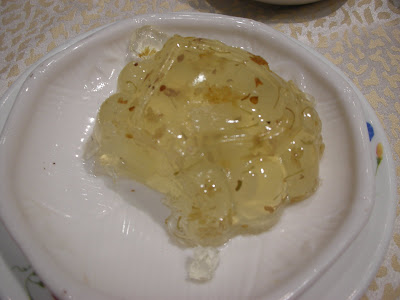 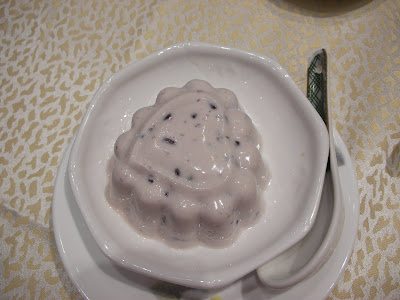 相思红豆糕
We board the MTR and alight at Wong Tai Sin station. The temple is located above the station. It's really people mountain people sea, there are lots of tourist as we saw the tour buses parking at the compound. 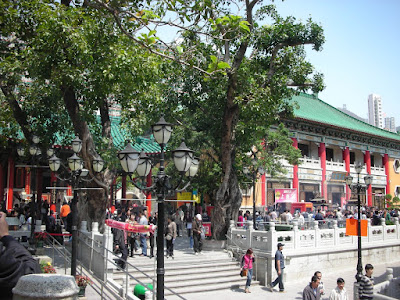 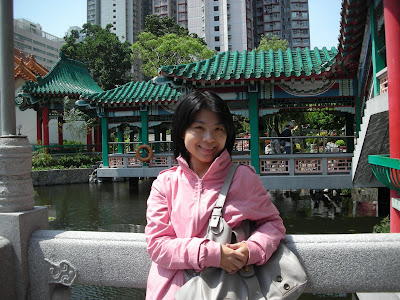 We board the MTR and alight at the next station - Diamond Hill. The Chi Lin Nunnery is about 10min walk from the MTR station.
The buildings are the only ones to be built with wooden rooftops in modern Hong Kong, without the use of a single nail in its construction. This is based on a unique architectural style from the Tang Dynasty which uses special interlocking systems cut into the wood for construction. 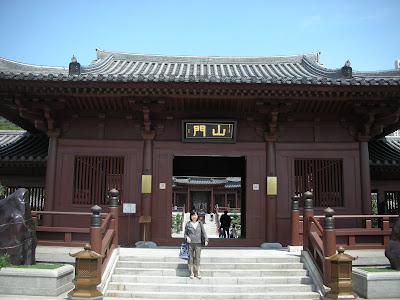 After that, we decide to head to Central and I thought of a place to bring my mom to but I can't recall the street name. Hopefully this Pottinger Street is the street which I been there before.
Yes, we found Pottinger Street 砵典乍街. The street is also also known as the Stone Slabs Street (石板街) by the locals as it is laid with granite stone steps which is rare nowaday in Hong Kong. 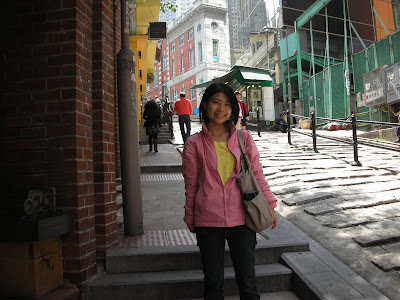 Pottinger Street
We also went to the Central to Mid Level Escalator which is near Pottinger Street. It is the longest outdoor covered escalator system in the world. The escalator daily runs downhill from 6:00am to 10:00am and uphill from 10:30am to midnight. This time I didnt took from one end to the other end. 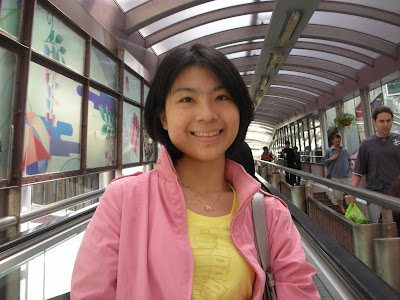 Central to Mid Level Escalator
There is this kiosk which you can tap your optus card and there will be HK$2 rebate. We saw a old guy bringing a couple of optus card to tap. We also tapped our optus card since there is rebate if board at Sheung Wan and Central MTR stations. I wonder whether there is such kiosks elsewhere? 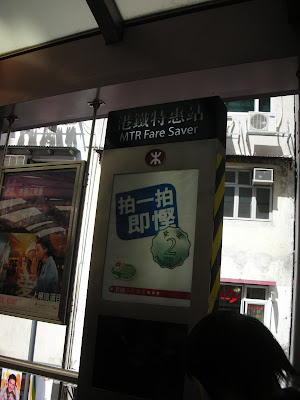 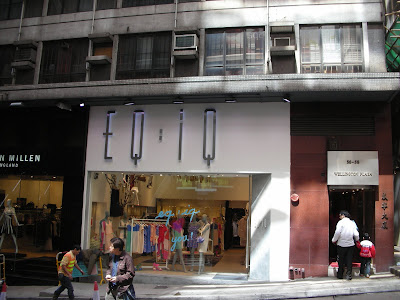 We head to Yung Kee for lunch again. It's almost 2pm and we had not taken our lunch. We ordered Roasted Pigeon and mushroom soup and also takeaway Roasted Goose and Pigeon. Hehe... 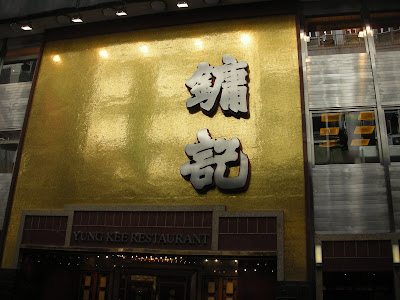 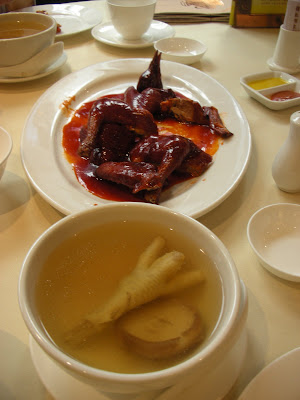 We board the MTR and head back to Mong Kok. We shop around the streets as we still have some time. At around 4.30pm, we went back to the hostel and collect our luggages and board the bus A21 to the airport. The journey takes about an hour and we alighted at Terminal 2. 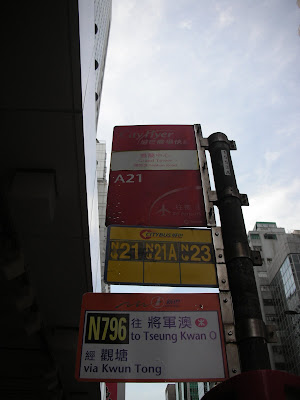 Waiting for Bus A21
As the counter for checking in is not yet open, I went to the service counter to enquire where to refund the Optus card. There is a link to the MTR station and the optus card can be refunded here. 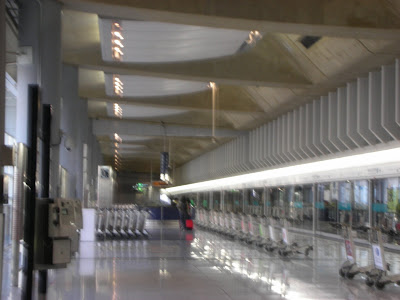 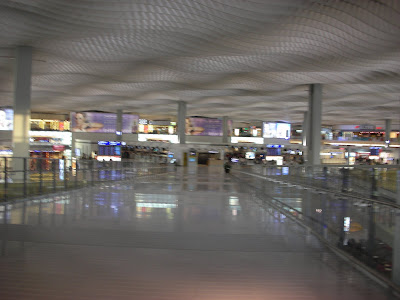 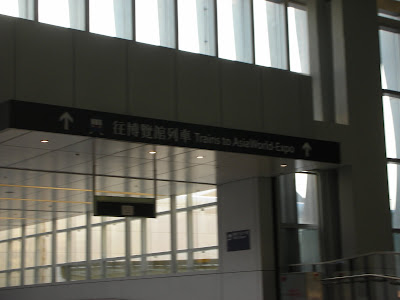 Link to the MTR station 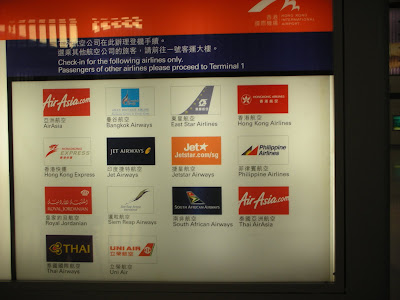 Check in for these airlines at Terminal 2

We checked in our luggages and went to the above level to have our dinner. We ordered 2 plates of fried rice from this stall 上海姥姥. Each plate cost HK$50 which is not cheap. The fried is really salty and hard, not edible for human beings. We ordered a bowl of noodle, hopefully this will be better. The noodle taste ok but there is a weird smell from the pork ribs. In the end, we bought sandwiches from 7-11. This dinner is expensive costing HK$138 ~ S$ 27and yet not edible. Those who check in at Terminal 2, please boycott this stall. I had never ever taste such inhuman food before. 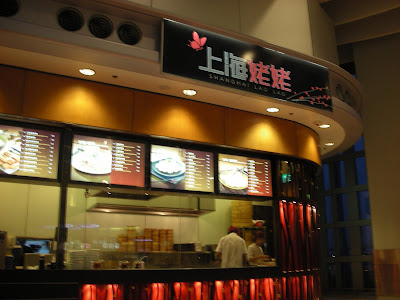 Never ever buy food from this stall 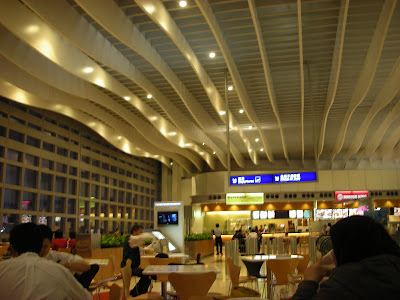 The eateries are located at the upper level 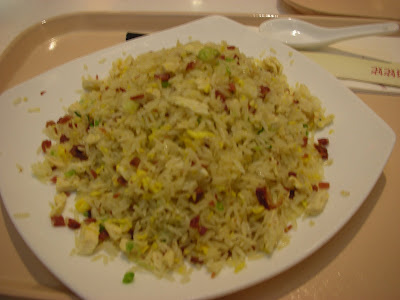 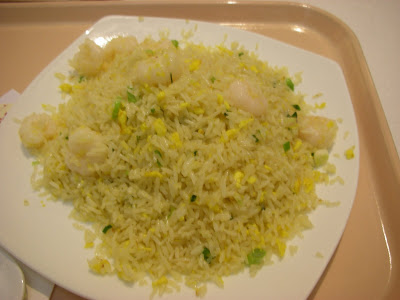 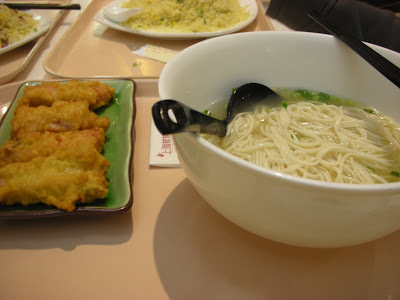 By the time we finished our dinner, it's already 7.30pm so we head to the immigration clearance area. It takes us about 15min to clear the immigration and I was extremely shock that we had to board a skytrain back to Terminal 1 to board the plane. Our flight is 8.15pm and the gate will closed at 7.50pm so which means we are left with 5 min. According to the guy who man the sky train, it takes abt 5 min from Terminal 2 to Terminal 1. Shit.... Once the sky train reach Terminal 2, we ran and ran to our gate. OMG, I didnt know that the boarding gate has been changed from gate 7 to gate 11. There is also a couple from Malaysia who is taking the same flight as us so we all ran to gate 11. We keep panting when we reached gate 11. For those who are taking planes from Terminal 2, please clear the immigration clearance earlier to avoid similar situation as us.
The plane landed at Changi Airport at past midnight. It was raining when we reached Singapore and YQ came to fetch us. Thank you dear.
>>Epilogue
Posted by Jerlin Tan at 11:59 pm